'Civilians have no hope': Syria ceasefire set to begin 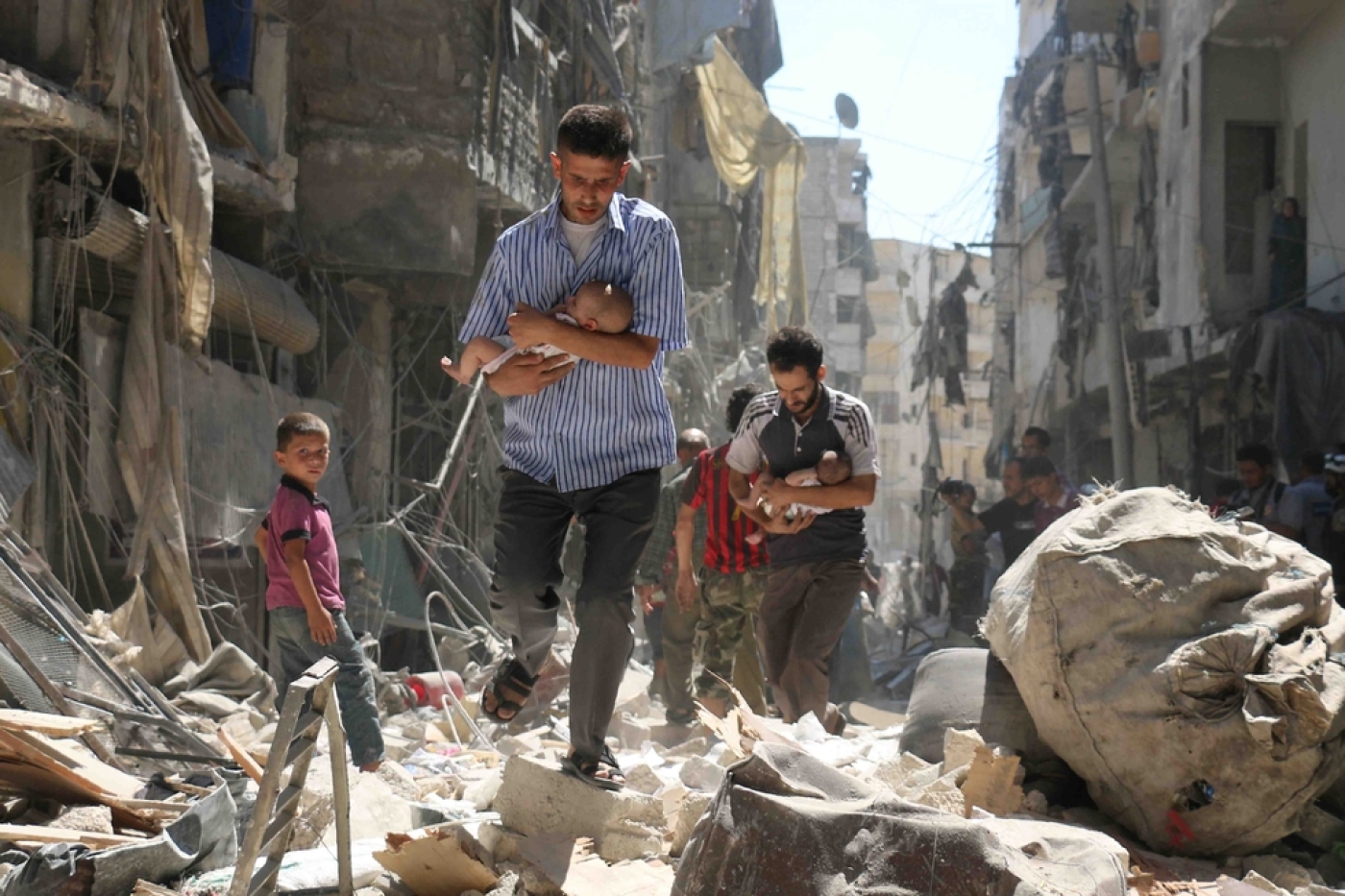 Grieving relatives amid the rubble after air attack on rebel-held Salihin, Aleppo, on 11 September (AFP)
By
MEE and agencies

A ceasefire in Syria, brokered by Russia and the United States, is due to begin at sundown on Monday after scores of civilians were killed in a bloody weekend of strikes.

The truce, announced after talks by the Russian and US foreign ministers, has been billed as the best chance yet to end Syria's five-year civil war which is estimated to have killed more than 290,000 people.

As the clock ticked towards the initial, 48-hour ceasefire both the rebels battling the Syrian government, and its political opposition, were still weighing whether to abide by the agreement.

Only one rebel group, Ahrar al-Sham, had given its official reaction - a rejection of the ceasefire deal which the influential hardline rebels said would only serve to strengthen the Syrian president, Bashar al-Assad.

But even as world powers threw their support behind the deal, weekend strikes on the key opposition cities of Aleppo and Idlib killed at least 74.

"We hope there will be a ceasefire so that civilians can get a break. The shelling goes on night and day, there are targeted killings, besieged cities," said Abu Abdullah, who lives in Aleppo's rebel-held east.

"Civilians have no hope anymore," he added.

Unidentified warplanes bombarded both cities on Saturday, killing 62 in Idlib alone. Raids there hit several areas, including a market full of shoppers preparing for the Muslim holiday of Eid al-Adha, which begins on Monday.

The state news agency, SANA, reported on Saturday that Assad's government "approved the agreement" for a truce and the Lebanese militia, Hezbollah, which has intervened on behalf of Assad, also announced its support.

Iran, a key backer of both Assad and Hezbollah, also welcomed the deal although its foreign ministry spokesman, Bahram Ghasemi, warned that the deal's success relies on creating "a comprehensive monitoring mechanism, in particular control of borders to stop the dispatch of fresh terrorists" to Syria.

Syria's main opposition group, the High Negotiations Committee (composed of political dissidents as well as armed rebel factions), had yet to formally respond.

But the hardline Ahrar al-Sham, which works closely with former al-Qaeda affiliate Fateh al-Sham Front, rejected the deal, saying it would "send all the sacrifices and gains of our people, who have risen up, into smoke".

Fateh al-Sham is not covered by the truce agreement but it too dismissed the plan, with spokesman Mostafa Mahamed writing on Twitter: "Negotiations and deals which do not take account of fighters on the ground are useless."

In the capital Damascus, resident Taher Ibrahim said he did not expect any lasting respite from the fighting.

"Nobody among the Syrian population accepts this agreement ... [the opposition] are all the same and none of them will commit to this truce," he said.

But in rebel-held Douma, besieged by government forces since 2013, the local council said it backed the truce and appealed for peace, stressing: "Enough of war."

The agreement was reached after talks between John Kerry, the US secretary of state, and his Russian counterpart Sergei Lavrov in Geneva.

It would see fighting and indiscriminate air attacks halt across the country, starting at sundown on Monday for 48 hours, which could then be renewed.

To get aid into besieged Aleppo, cut off last week by government forces for the second time in two months, a "demilitarised zone" would be established around the Castello Road into the city.

If the ceasefire holds for one week, the US and Russia - which back opposing sides in the conflict - could start joint operations against militants from the Islamic State (IS) group and Fateh al-Sham.

Pro-government Syrian newspaper al-Watan said on Sunday that the deal would pave the way for renewed peace talks in Geneva.

Several attempts at negotiations have failed since the conflict erupted, with talks earlier this year in the Swiss city fizzling out after the opposition walked away in protest at the humanitarian situation.