Islamic State group has advanced close to the outskirts of the city near the border with Turkey, trapping as many as 300,000 people 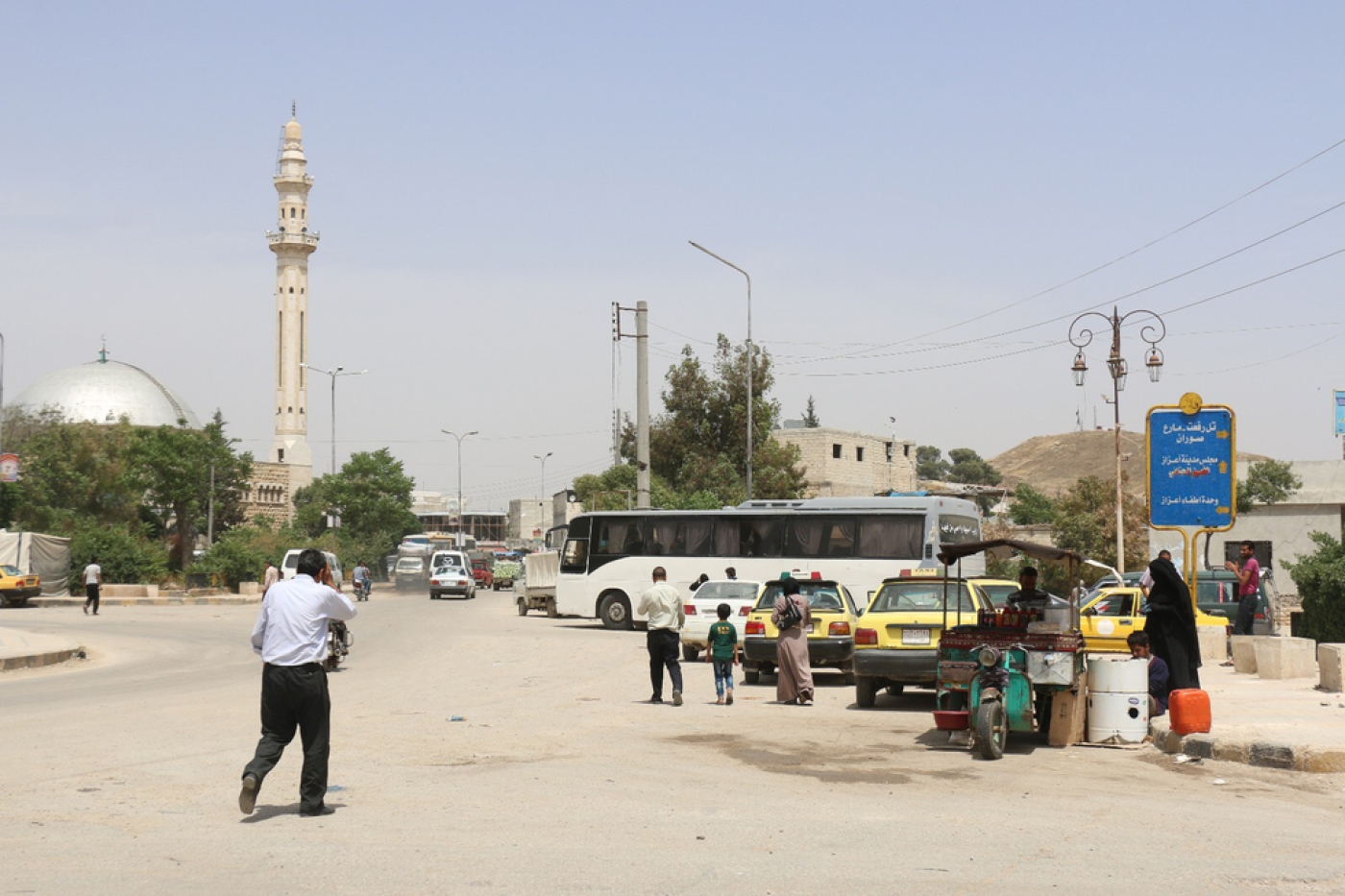 Azaz, surrounded by Kurdish-held territory to west and IS to east, has been rebel stronghold since 2012 (MEE contributor)
By
Lizzie Porter
, Ibrahim Jawdat

GAZIANTEP, Turkey - Civilians trapped in Azaz fear that tens of thousands may be killed if the Islamic State (IS) group takes control of the city.

An opposition activist in the northern Syrian city told Middle East Eye that there will be a “huge massacre” if IS takes Azaz, which now houses thousands of displaced civilians and rebel fighters.

IS began an advance across northern Syria last week and now occupies territory within 5km of the city. The IS-linked Amaq news agency published images of what it said were clashes with the US-backed moderate Free Syrian Army (FSA) groups in the towns of Kafr Kalbayn and Kal Jibrin, the closest settlements to the city’s southeastern boundaries.

"If ISIS enters Azaz there will be a huge massacre. They have threatened slaughter if they take control of the city. That is the bitter truth,” said the source, speaking anonymously for security reasons.

Amaq footage of #IS fighters clashing with FSA inside Kafr Kalbayn/Kaljibrin villages near Azaz pic.twitter.com/iiePIIrGlJ

Azaz – surrounded by Kurdish-held territory to the west and IS to the east – has been a rebel stronghold since it was taken from the Syrian government in 2012. It was dubbed the “armoured vehicle cemetery,” reflecting the number of abandoned government tanks that littered its streets.

The city, less than 15km from the border with Turkey, has been a staging ground for supplies into rebel-held areas, as well as for taking wounded soldiers for treatment in Turkish hospitals.

In February, a Russian or government airstrike on a children’s hospital in the city killed at least 14 people.

“The situation is very difficult. Daesh advanced and occupied [nearby] villages and killed civilians and soldiers. There are thousands of people displaced from those villages now in Azaz,” said the activist, using a different word for IS.

The loss of human life would be “huge,” he said, if the group were to take Azaz.

Azaz’s present population is unknown, but it is thought to be as many as 300,000, including 200,000 civilians who fled IS’s advance and government air strikes on Aleppo.

The IS movement towards Azaz comes as the Kurdish YPG-dominated and US-backed Syrian Democratic Forces (SDF) attempt to oust them from their stronghold of Manbij near the Euphrates river and prepare to assault Raqqa, the militant group’s de facto capital.

IS temporarily seized the nearby town of Marea from FSA rebels on Friday, leading to protests in the streets of Azaz.

The city’s Sharia Council issued a notice banning internally displaced people (IDPs) from elsewhere in northern Aleppo province from entering the city, fearing there would be IS sleeper cells among them.

The council issued another statement insisting that it would clear a safe route for civilians to flee into the city.

“This [the IDP entry ban] is a temporary decision due to the state of emergency and the presence of Daesh nearby; it is not to increase your suffering. Our blood is your blood and your people are our people.”

It also said that informal crossings into the city are “full of mines”.

Sources have told MEE that IS planted explosives and booby traps in areas it has seized near Azaz, which have caused multiple fatalities both among soldiers attempting to retake ground and fleeing civilians.

A doctor working in an Azaz hospital told MEE that civilians were “very afraid” of the “chaos” that would occur should IS take the city.

“There will be more migration and more victims,” said the doctor, who also asked to remain anonymous.

At present there are enough medical supplies in the city, he said. But he stressed that civilians were terrified of potential international coalition strikes targeting IS.

“When IS enters an area the coalition starts bombing and the civilians are often hurt,” he said.

IS taking Azaz is 'very possible'

Kyle Orton, a research fellow specialising in Syria at the British think-tank Henry Jackson Society, said it is “very possible” that IS could take Azaz because the FSA-branded rebels guarding the city have been given “insufficient support” from the US and its allies, and because they are waging a two-front war.

“The FSA in Azaz comes under simultaneous attack from the YPG/PYD/PKK [Kurdish forces] whenever IS launches an offensive in the Azaz pocket in northern Aleppo,” he claimed.

So far IS has made few inroads into the city itself, but Orton said the expulsion of the FSA from the Azaz pocket would weaken the nationalist rebels in northern Syria. It would also potentially allow the PYD to connect up its cantons from the Jazira and Kobane to Efrin, all along Turkey’s border.

FSA rebels are currently reinforcing Azaz’s boundaries by digging trenches and deploying soldiers to positions along the frontline between the city and the village of Kafr Kalbayn, currently under IS control.

The FSA rebels have inadequate weapons and equipment compared with IS and Kurdish forces.

“Rebels are trying to take back the villages that Daesh seized but they do not have tanks or armoured vehicles,” according to a media activist inside Azaz.

“We are fighting Daesh on behalf of the world and it is strange that the world does not give us help to protect ourselves and get rid of them.”

Images posted on opposition social media said that FSA brigades preventing IS’s approach towards Azaz had been resupplied with 9M113 Konkurs anti-tank missiles and had fired them at bulldozers in IS territory.

But Syrian opposition politicians criticised the US for what they see as prioritising the YPG-dominated SDF over Sunni Arab rebels taking on IS on different fronts.

The Syrian National Coalition released a statement warning of the “consequences of the current policy that limits effective military support to only one faction,” suggesting that the YPG were gaining ground at the expense of FSA brigades.

“Arming the Free Syrian Army is crucial to protecting civilians from the terror of the Assad regime, defeating ISIS terror and liberating areas under their control,” the group wrote, without specifying which groups within the FSA it would like to see armed.

Turkey would favour IS over Kurdish rebels

To make matters more complicated, Turkey, which is part of the anti-IS coalition, would allow the militant group to take Azaz over Kurdish forces, fearing a Kurdish statelet along its 800-mile border with Syria.

“Turkey would rather have IS than the PYD along its border,” Orton said. “Ankara would not do anything to facilitate IS’s takeover of Azaz, but if it takes the city and the only alternative to retake it is the PYD, Turkey will favour leaving IS be.”

The PYD completing a statelet from Hasaka to Efrin along Syria’s border would further weaken the anti-IS coalition by once again making IS a lesser priority for Turkey. The scenario would be one of the Turkish government’s “worst fears,” Orton said.

Meanwhile, the humanitarian situation has worsened for civilians in and around Azaz.

Within the city, sources said food is lacking and prices of basic goods, such as sugar and gas, are high.

Medecins Sans Frontieres (MSF) confirmed on Friday that it was pulling most of its staff and patients out of its hospital in the town of al-Salamah, just to the north of Azaz.

“For some months, the front line has been around seven kilometres away from the hospital,” said Pablo Marco, MSF operations manager for the Middle East.

“Now it is only three kilometres from Al Salamah town. There is nowhere for people to flee to as the fighting gets closer.”

The hospital is the largest of six medical facilities run by MSF in Syria.

IHH, a charity providing humanitarian assistance within Syria, confirmed that it is still taking hot food shipments across the border to the Bab al-Salamah refugee camp next to the town of the same name.

“We have no plans to evacuate our staff, but are ready for any emergency,” director Abdulsalam al-Sharif told MEE.

The UN’s refugee agency (UNHCR) said it was “deeply concerned” about the situation of people stuck between Azaz and the closed Turkish border.

Turkish authorities did not respond to requests for comment over whether it would open its border.

The United Nations Office for the Coordination of Humanitarian Affairs said that 4,600 individuals had moved north from informal settlements and from villages now in IS territory to communities around Bab al-Salam camps and Azaz, which "are already struggling to cope with rising needs since recent influxes of IDPs".

Humanitarian organisations in the area "have gone into hibernation mode" it said.

It had also received worrying reports of executions among those suspected of sympathies with rebel fighters in IS territory.

“We are trying by all means available to keep Daesh from the area,” said one of MEE’s sources. “When a western journalist is killed or Daesh bombs a western country everyone screams and does something. But thousands of women and children have been killed in Syria by Assad, Daesh or the Kurds and no one hears their voices, unfortunately.”