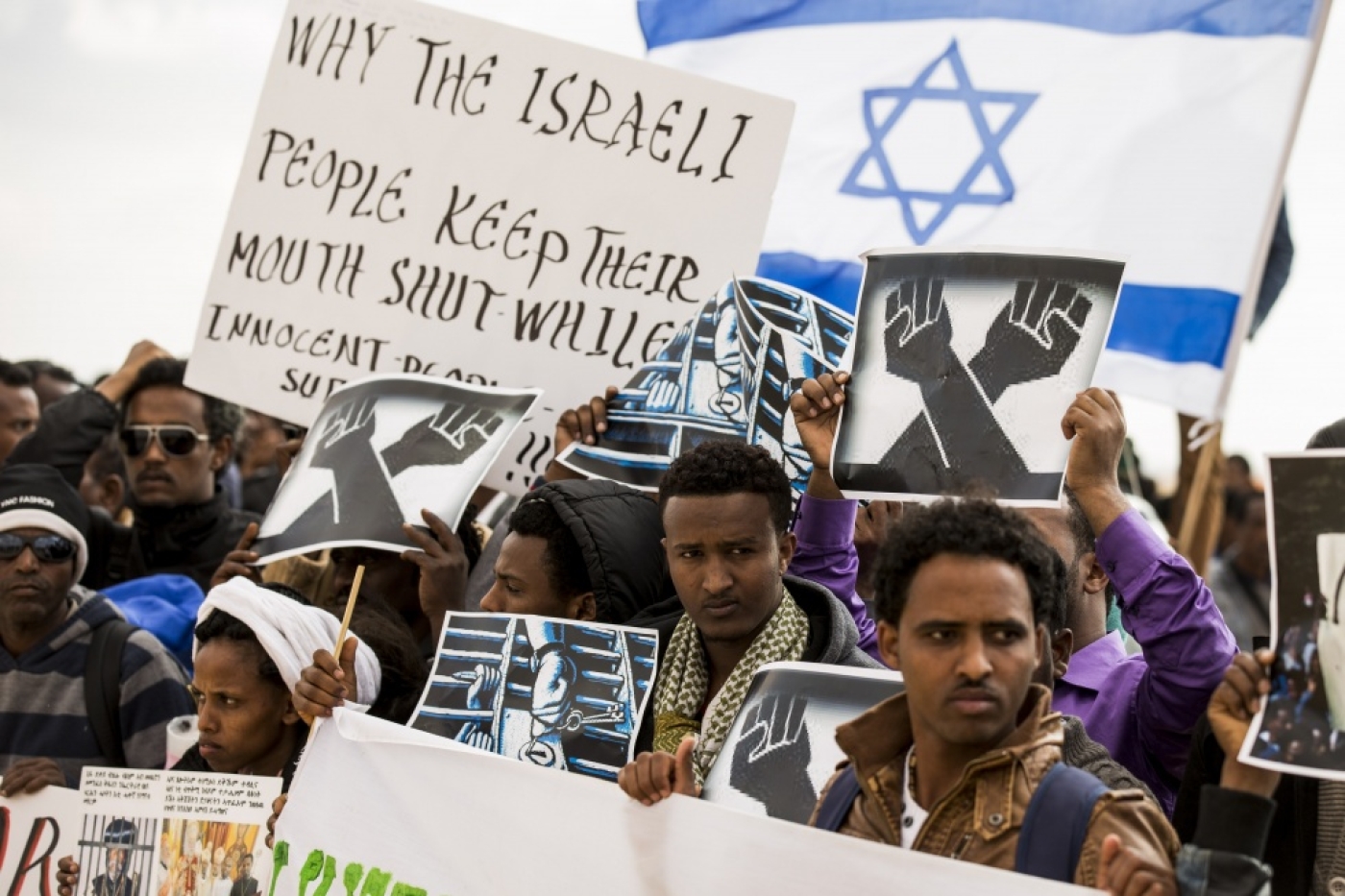 On 21 September, in a move that has brought some respite to over 50,000 Africans who have fled to Israel in recent years, the country’s High Court ruled against recent amendments to the 1954 Prevention of Infiltration Law and ordered the closure of the controversial Holot detention facility.

The law allowed authorities to imprison newly arrived asylum seekers in a closed facility for up to one year without trial. It also enabled authorities to move certain groups of asylum seekers to the ostensibly “open” Holot facility, so described because detainees are permitted to leave at certain times, but are required to be present for roll calls throughout the day. In addition, the gates of the centre, located in a remote part of the Negev desert, are locked at night. In September’s 7-2 ruling, the court ordered the closure of Holot within 90 days and instructed authorities to relax controls on the centre’s detainees.

The court’s decision was unprecedented, in that it was the only time it has ever nullified two versions of the same law. A previous incarnation of the Infiltrator Law enacted by the Knesset in 2012, which enabled authorities to jail asylum seekers for up to three years and in some cases longer, was struck down unanimously by the same panel of judges last year. In both cases judges cited incompatibility with the right to liberty and human dignity enshrined in Israel’s Basic Laws, which in effect serve as a constitution.

In response, government officials and conservative commentators have lashed out at a High Court that is out of step with the much more right-leaning legislature. Judges have been accused of overstepping their mandate and there have been calls for the judiciary to be reined in. The Israeli daily newspaper Haaretz quoted Knesset Member Miri Regev as saying: “the Knesset gave [the court] this authority and it is the one that will limit it.”

Justice Uzi Vogelman, who authored last month’s majority ruling, stated that the law “violates human rights in an essential, deep and fundamental way.” Similarly, he said of the 2012 amendment that the limits to personal liberty were “disproportionate” and “[deviated] from the principles accepted in Israel and in the rest of the civilised world.”

The influx of migrants from sub-Saharan Africa began in the mid-2000s, gaining momentum as older routes from North Africa to Europe became increasingly restricted. However, in late 2012, a fence sealing the border with Egypt was completed, bringing migration through the Sinai to an almost total halt.

Supporters of the Infiltration Law, including Prime Minister Benjamin Netanyahu himself, charge that most of the African migrants are “infiltrators” who are in the country for economic reasons. It is hard to know just how much economic factors weigh in the decisions of individuals who have made the hazardous trip to Israel, especially given the authorities’ reluctance to review asylum applications. But what is far more certain is that the two source countries where the overwhelming majority of migrants come from -Sudan and Eritrea - have notoriously poor human rights records.

According to a UNHCR survey for 2013, Eritrea, with a population of only 6.5 million, accounted for 35,000 asylum claims globally, making Eritreans the 8th largest group of asylum claimants. The notoriously repressive Horn of Africa country consistently ranks lowest on the Reporters without Borders Press Freedom Index, below even North Korea, to which it is often likened in media reports.

The case of Dawit Weldegebriel, an Eritrean who has been in Israel for more than four years, is not entirely exceptional. He told the Middle East Eye that while he was working at a rural school in Eritrea his open criticism of the government’s education policies landed him in prison. After escaping to Sudan he and a fellow Eritrean were kidnapped by Bedouin smugglers in 2010, who then took the pair to Egypt’s Sinai Peninsula. He was later released near the Israeli border after securing a ransom of $13,000.

“We crossed the border and were welcomed by Israeli soldiers,” Weldegebriel told MEE. “That day was unique for us because they welcomed us and gave us bread and water. They then brought us to Saharonim [detention centre] where we were held for a month.”

Rights groups cite systematic human rights violations as the reason so many people flee Eritrea. According to a report released last month by Human Rights Watch, these include “long-term forced conscription and forced labour, extrajudicial killings, disappearances, torture and inhumane and degrading treatment, arbitrary arrest and detention, and restrictions on freedom of expression, conscience and movement.”

The situation is not better for most asylum seekers from Sudan, whose incumbent president Omar Al-Bashir is wanted by the International Criminal Court on counts of genocide, war crimes and crimes against humanity.

Mutassim Ali, an asylum seeker activist from Sudan’s conflict-stricken Darfur region and a Holot detainee, came to Israel in 2009. He felt that the lack of diplomatic ties between Sudan and Israel would make deportation less likely. He also believed that Israel’s history as a safe haven for Jewish refugees would make it a more welcoming place for asylum seekers than other countries. “Darfur is going through genocide and if there is anyone on the planet who can understand what genocide means it is them [the Jews],” Ali said. Now simply having visited Israel, which Sudan considers an “enemy state,” would make Ali liable for prosecution back home.

Nevertheless, Israel has been accused by rights groups of dragging its feet on the issue of asylum reviews, refusing to grant refugee status to a single Sudanese asylum seeker while rejecting 99.9 percent of Eritrean applications for asylum. This is in spite of the fact that Sudanese nationals make up the world’s 4th largest refugee population, while over 80 percent of Eritrean asylum seekers are afforded protection in countries such as Norway, Italy and the UK.

State lawyers say they do not forcefully deport Eritrean and Sudanese asylum seekers en masse because of obligations under international law and, in the case of Sudan, a lack of diplomatic ties. But according to Human Rights Watch and other critics of the government’s stance on asylum seekers, the state’s policies have coerced many asylum seekers into returning home despite documented cases of returnees suffering various abuses in their countries of origin. Government officials themselves have made no attempt to conceal such intentions. In 2012, then Interior Minister Eli Yishai said bluntly of asylum seekers that he aimed to “lock them up and make their lives miserable.”

Backlash from the right

The working class neighbourhood of Neve Sha’anan in south Tel Aviv is home to the world’s second largest bus station. It is also a place where many asylum seekers have settled, including Weldegebriel. “Every month they bring people from the prisons and dump them at the Central Bus Station at Levinski Park in Tel Aviv,” he said.  “People do not know where to go. They don’t know Hebrew, they don’t have any money. People were really suffering and decided to create their own life in the Neve Sha’anan area.”

Ali and many other asylum seekers and activists say they sympathise with local residents who feel threatened by the presence of large numbers of poor, unemployed newcomers in what was already an economically marginalised part of the city. They say asylum seekers have difficulty finding work because of ambiguous regulations and complex bureaucratic procedures, while government neglect has created a powder keg of social tensions in Neve Sha’anan.

A similar sentiment is echoed by Shula Keshet, a gender activist from Neve Sha’anan, who says that the government’s de facto policy of shepherding migrants into poor Mizrahi communities without providing alternatives has created ghettoes of poverty. This has created fertile ground for xenophobia which, coupled with the hostile response to the High Court’s recent ruling, has tempered the hopes of asylum seekers.

On the evening of 5 October, for the second consecutive night, scores of anti-immigrant protesters descended on Levinski Park carrying black flags with “bagatz” (the Hebrew acronym for the High Court) written in white letters. The crowd shouted “Sudanese to Sudan!” as nervous African immigrants looked on. On several occasions, police intervened to stop protesters attacking the bystanders.

May Golan, a 28 year-old protest organiser, condemned the court’s 21 September ruling, saying: “we didn’t choose the [court’s] judges, we chose members of the Knesset and we demand they protect us. We demand they give us another law or take down the authority of the judges.” Golan, who has gained a reputation as fierce anti-immigrant campaigner, counts Michael Ben-Ari, an ultranationalist former Knesset member who attended the protest, as one of her political patrons.

For now, asylum seekers remain caught in a legal limbo and face a future of worrying uncertainty as they wait to see what the government’s next move will be. “Right wing politicians will do whatever they can to make out situation miserable. I know we have a lot to do moving forward to get our rights,” said Weldegebriel.