Copies of an edition of French satirical weekly newspaper Charlie Hebdo are displayed on 24 February 2015 in Villabe, south of Paris (AFP)
By
MEE staff

French satirical magazine Charlie Hebdo was slammed once again by critics for its latest cartoon on refugees and migrants in Europe.

The cartoon depicted a grown-up version of Alan Kurdi, the three-year-old Syrian toddler who drowned off Turkey’s coast last summer and whose image galvanised international sympathy toward refugees, chasing after European women.

The caricature was in response to the allegations of mass sexual harassment of women in the German city of Cologne on New Year’s Eve. Women who reported the assaults described most of their attackers as appearing to be from the Middle East and North Africa.

In the cartoon, two men are featured chasing after two screaming women. At the top of the drawing is a picture of Kurdi’s iconic drowned image, face down in the sand. Next to that is the question, “What would little Alan have grown up to be?” The answer at the bottom of the cartoon reads, “Ass groper in Germany.” This is not the first time Charlie Hebdo has featured Alan Kurdi. In a cartoon published last September, the little boy’s image was again used. The main header above Kurdi said: “So close to his goal” while a McDonald’s-like billboard next to him advertises “2 kids' menus for the price of one.”

The controversial French magazine recently marked one year since a fatal terrorist attack on their offices in Paris led to an outpouring of public support, encapsulated in the catchphrase “Je suis Charlie” that resonated globally.

In the aftermath, the magazine witnessed a resurgence in its distribution sales and a high-profile reputation.

“Following the assault on its office, Charlie Hebdo has gone from niche read to global symbol, increasing its print run from a meagre 60,000 to a million and quadrupling its subscriptions,” Francois-Cerrah said. “From struggling to stay afloat, it is now flush with cash, receiving over four million euros in donations, including almost a million euros from the French government.”

But since the attack, in which 10 employees including editor-in-chief Stéphane Charbonnier were gunned down by two men affiliated to al-Qaeda, empathy for the magazine regarding its later publications on issues of religion and the refugee crisis has considerably lessened. Some commentators have accused the magazine of using the veneer of freedom of speech to wave the banners of Islamophobia and racism.

Reactions to the latest Alan Kurdi cartoon mostly expressed indignation and condemned what they considered was blatant “racism”.

This is racism pure and simple and I say again: I am not Charlie. Charlie Hebdo mocks the death of Syrian toddler: http://t.co/fHDcaYJAEJ

Others, however, pointed out that the cartoon was satirising the European right-wing and anti-refugee response to the migrant crisis.

Journalist Max Fisher of the Vox news website offered a critique of the controversial cartoon, describing it as "tasteless" and allowing much room for misinterpretation.

"Portraying Aylan Kurdi [sic] as a young man with a pig nose who is sexually assaulting German women, even ironically, is tasteless," Fisher wrote. "Even if you ultimately agree that the magazine's desired political point is correct, it does not make the means of getting there acceptable.

"The cartoon does allow for misinterpretation, and would be easy to misread as endorsing rather than satirising the idea that Aylan Kurdi would have grown up to sexually assault European women." 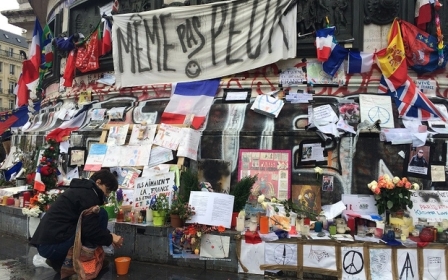 Paris Attacks
One year after January massacre, where is Charlie?