Jewish people celebrating their historical freedom from slavery are now forced to do so under lockdown, trapped at home by Covid-19 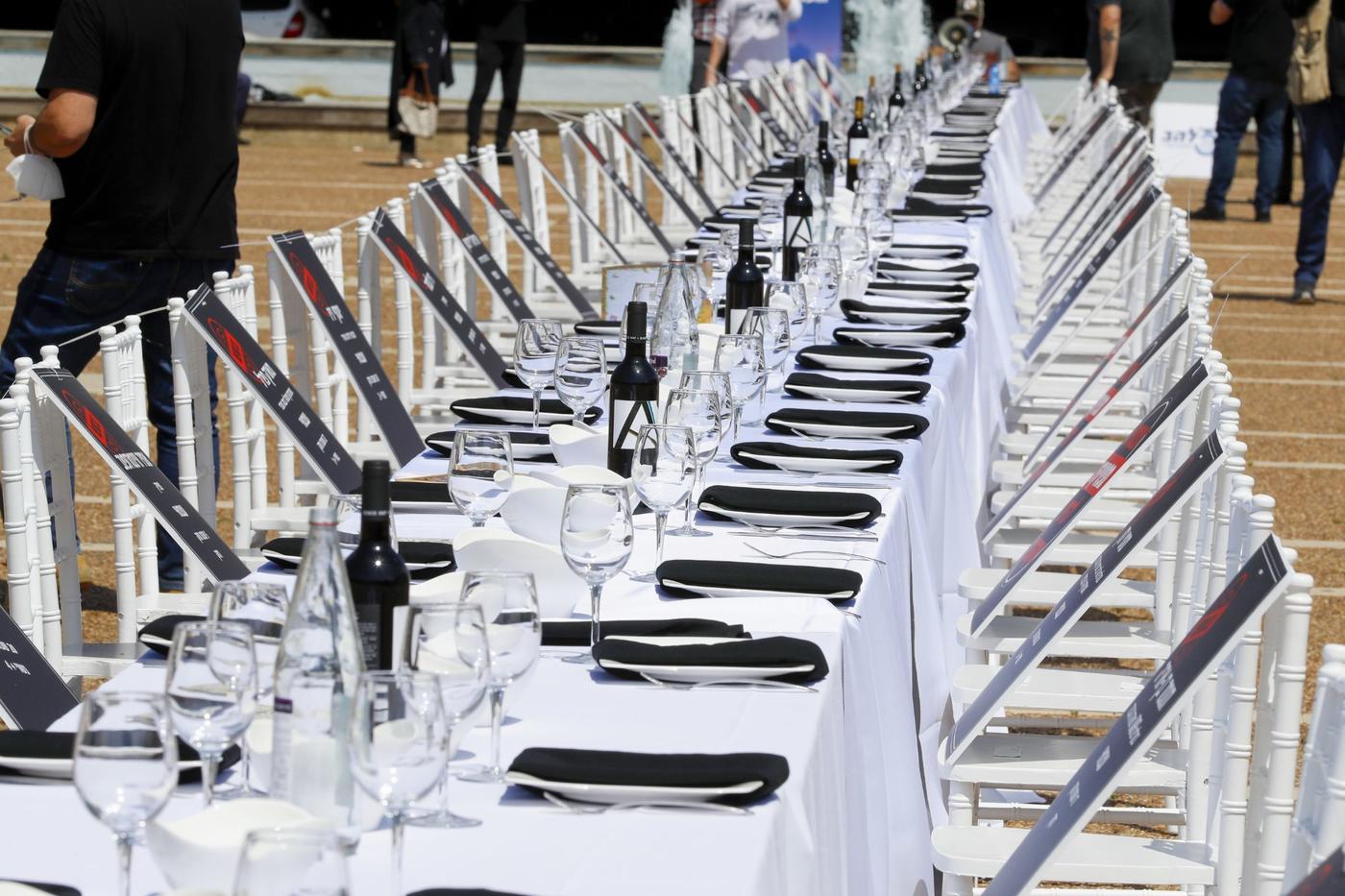 Chairs set up in Tel Aviv's Rabin Square, part of a demonstration over the lack of compensation in the government's economic plan to counter the impact of the coronavirus pandemic, ahead of the Jewish Passover (AFP)
By
Lily Galili
in
Tel Aviv, Israel

One of the peak moments of the Jewish Passover Seder ceremony, a combination of outrageously big feasts and the lengthy story of the Israelites’ Exodus and freedom from Egyptian slavery, is the question usually asked by the youngest (often-reluctant) member of the family: "What’s different tonight or what has changed?"

It is usually answered by four traditional answers, referring to the special rituals of that night.

In Israel 2020, with the coronavirus pandemic, the question sounds somewhere between sad and comic. Everything has changed.

The very significance of Passover to celebrate, year after year, the ethos of exit from slavery to liberation, collective and individual freedom is to be celebrated under nationwide curfew. The call “let my people go” is substituted by “let my people stay home”.

The family-oriented nature of Seder - the Hebrew name of that special night - can be reduced to one decree mentioned in the text read around the table: “You shall tell thy son.”

That is the essence, the story conveyed for centuries, from generation to generation, to remember how Israelites under the leadership of the prophet Moses (cherished by Muslims and Christians too) made the long journey from bondage to freedom, teaching the value of liberty and the high price often attached to it.

The universal message will be hard to convey in a time of corona. Under strict restrictions, older parents and elderly grandparents are separated from children and grandchildren to keep them safe.

Each household on its own, which means many lonely people. “You shall tell thy son”, the intimate mission, sounds different transmitted at an organised Zoom meeting.

“It is the beginning of a major change in the Jewish tradition,” says Meir Azar, senior rabbi in Beit Daniel, the largest reformed congregation in Israel, noting that quarantine and self-isolation is keeping relatives apart.

“Due to circumstances, we witness the rise of a new generation of Seder ceremony leaders. No longer just the father or the same uncle year after year. For instance, out of necessity we will see for the first time women taking charge in the absence of a man at the table,” he tells Middle East Eye.

“In more general terms, Passover is a story about a dream and better days for everybody. These days, more than ever, we are part of a global world. Whoever celebrated Passover out of the relevant context does not understand the nature of this holiday.”

Under these circumstances, Seder, the name of that long night with its unique dishes and the Haggadah tale of the Exodus complicated by old Aramaic phrases, loses its basic meaning.

Seder means order in Hebrew. And order defines it. The whole ceremony is meticulously structured - when to read what, when to eat what, when to raise one of the four mandatory glasses of wine.

Nothing orderly in April 2020, however. Order has been disrupted by a plague, not that different from those inflicted on the Pharaoh to force him to free the Israelites. Yet this one - so far - makes no sense, its reasons and its purpose still a big mystery.

Disruptions come in all forms: Palestinian workers from occupied territories often travel to Israel looking for work; nowadays, many of them head back from Israel not to be in isolation there. It is no longer a one-way ticket. 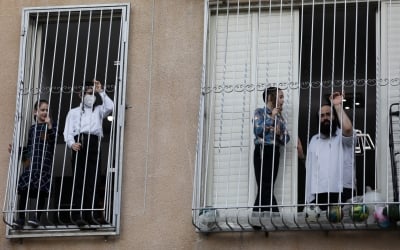 In the midst of this gloomy situation, some things stay constant: the food-shopping craze. Well, that can be easily understood.

Israelites left Egypt in a hurry, no time for one for the road. Israelis, so it seems, vowed it was not going to happen to them again. They stock up on food as if preparing for another biblical 40-year journey through the desert.

God is probably not going to rain “bread from heaven” again as he did in the desert, nor will he send quail as he did to satisfy the hunger of grumbling Israelites.

Therefore, Israelis stock up on all “kosher for Passover” food, unleavened and devoid of wheat according to Passover religious dietary restrictions. All the state’s “hametz” - food not kosher for Passover that has to be removed from the holiday-compliant public sphere - is symbolically sold to a non-Jewish Israelis, just to be returned after the Passover week. There are always the jokes asking, “What if he doesn’t want to give it back?” He always does.

The public sphere of Passover 2020 has changed drastically. Gone is the seasonal new clothes buying buzz. Stores are closed, and the empty streets are void of shoppers carrying shopping bags, replaced by fleeting ghosts wearing masks. Until not long ago, the enemy was “the other” carrying a bomb; now it is the other, not wearing a mask.

Gone from the public sphere are the rituals performed in the Ultra-Orthodox towns and neighbourhoods, the burning of the “hametz” and the immersing of utensils in boiling water to make them suitable for Passover kosher food.

What is for the Ultra-Orthodox a matter of religious observance has become touristic curiosity for secular Israelis. These rituals cannot be performed in coronavirus-stricken streets and gardens on Passover 2020. Certainly not when Ultra-Orthodox neighbourhoods are now under military control.

Soldiers in uniform have taken over the streets of Bnei Brak, an Ultra-Orthodox city near Tel Aviv. Over the last weeks, Bnei Brak, known as “the most crowded settlement in Israel”, has become a hotspot of Covid-19.

It has to do with the density of the population. The community hosts huge families with children in double figures crammed in small apartments, who are now totally disengaged from all Israeli life.

Most residents do not consume secular media, and have no smart phones nor internet. Strange as it sounds, coronavirus has been for many Ultra-Orthodox a vague notion for too long. In fact, it became more real when the first news about the many Covid-19 victims in the Ultra-Orthodox community in Brooklyn reached them in Bnei Brak. Brooklyn, in many ways, is closer to some of them than Tel Aviv.

Meanwhile, their local spiritual leaders - rabbis and others - encouraged them to stick to the routine of crowded synagogues and other communal customs. Here the rabbis are the authority, not the state.

Under these circumstances, the virus has been spreading in the city. Police stepped in and tightened the closure on Bnei Brak. The friction was painful to both sides.

Calling policemen “Nazi” is not that unusual in small but radical Ultra-Orthodox circles who defy all state authority. The military stepped in.  That certainly is “close encounters of the third kind”.

Many Ultra-Orthodox object to serving in the military, and are in fact exempt from mandatory service in Israel. For both sides, it is often the first time they meet each other in person for Passover, a particularly sensitive time of the year.

Bnei Brak looks like a city under occupation, even if in this case the soldiers are here to help. They do the family shopping if necessary, they distribute the traditional food packages to the poor and needy, a Passover tradition strictly observed.

Even the military chief of staff, Aviv Kochavi, paid a short visit to the city struggling with virus and desperately clinging to the strictest Passover rituals.

In large circles of secular Israel on Passover 2020, the arch enemy is not the ancient Egyptians who turned them into slaves, nor the contemporary Arabs. Hate speech and racism rapidly shifted from Arab-hating to hating the Ultra-Orthodox community that has been misled by its leaders, including the health minister, Yaakov Litzman.

Trying to accommodate his constituency and breaking the regulations his own ministry published, Litzman, who is also head of a major Ultra-Orthodox party, and his wife got the virus.

Freedom is isolation. Liberty is obedience and curfew.