Coronavirus and the Middle East: Call for release of prisoners grows

Demands for the release of detainees living in unsanitary conditions increase, as death toll from Covid-19 continues to rise across the region 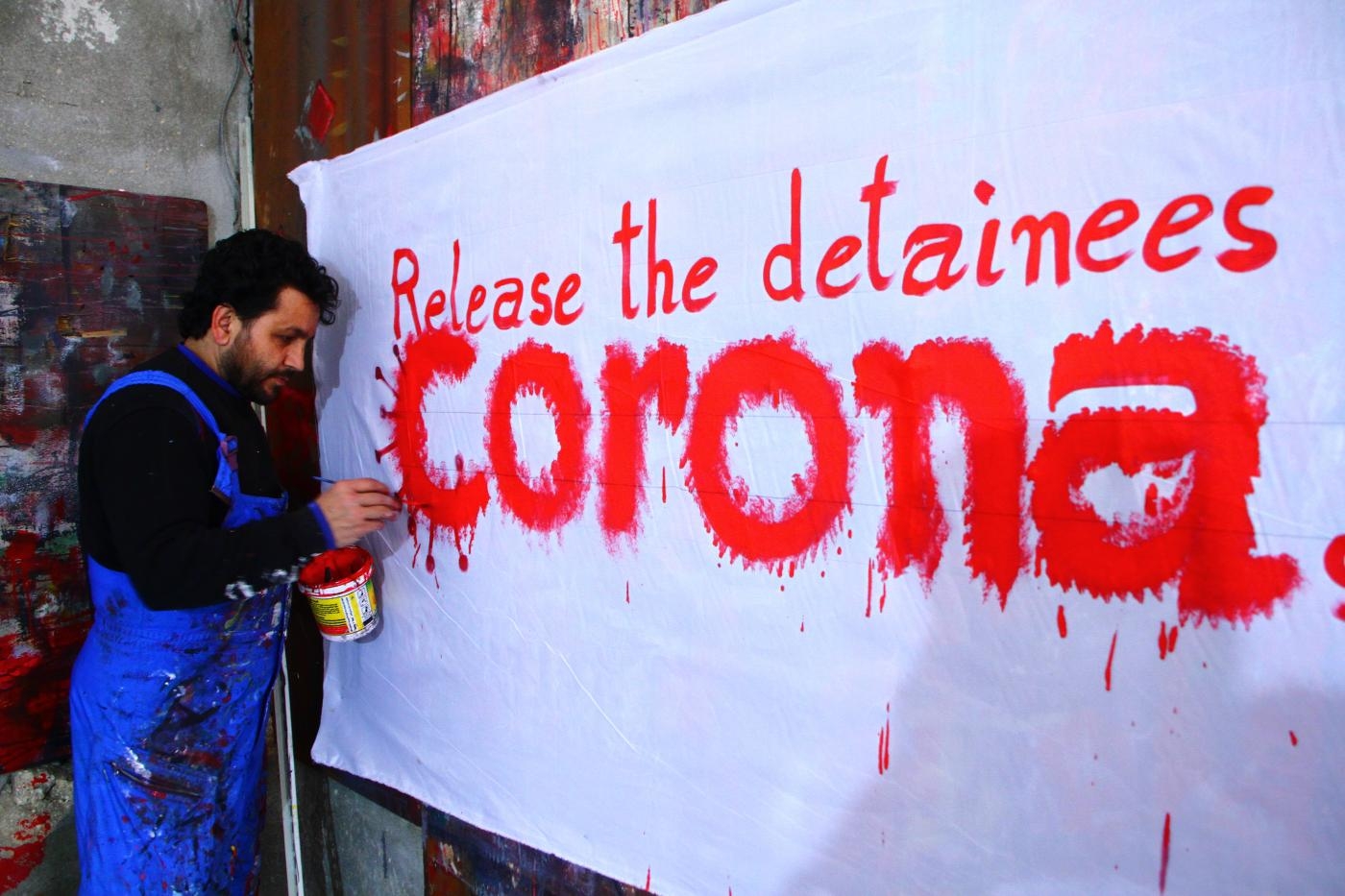 The increasing number of coronavirus cases across the Middle East has sparked a wave of demands for prisoners across the region to be released from unsanitary and cramped detention centres, where the threat of virus contagion is rife.

Online, hashtags have been shared to raise awareness of the plight of prisoners in unhygienic conditions, a concern shared by human rights organisations, which have also been drawing attention to the vulnerability of prisoners.

Middle East Eye takes a look at several countries in the region where the issue has come to the fore.

Bahrain recently released a "significant portion" of its prison population as the country tries to contain the outbreak of coronavirus. However, the Bahrain Institute for Rights and Democracy (Bird) has highlighted that many "prominent political leaders and human rights defenders" have been excluded from this policy and remain behind bars.

Sayed Ahmed Alwadaei, director of advocacy at the London-based activist group, said there had been no transparency on the part of the government regarding the identities of those released, and that the majority of those freed seemed to be foreign nationals and Bahrainis held for criminal offences.

“By excluding prominent human rights activists, as well as vulnerable inmates and those declared arbitrarily detained, the government has missed valuable opportunity to demonstrate compassion during an unprecedented international pandemic," Alwadaei said in a statement released on Wednesday.

The Ministry of Interior confirmed on Wednesday that the release of prisoners had been completed.

In Egypt, the hashtag "release the prisoners" (#خرجوا_المساجين) is trending, with activists and social media users using it to highlight the plight of the country's thousands of political prisoners, as well as the unsanitary conditions they are living in.

Nightmare conditions for political prisoners in Egypt. Amongst these prisoners are many of my own family and friends and by failing to act, authorities are effectively telling us that they're happy for these already vulnerable prisoners to die.#خرجوا_المساجين https://t.co/D3zgVsYRKF

The Egyptian government has come under scrutiny for not being transparent with the number of coronavirus cases in the country. Experts believe that the number of cases is currently much higher than official figures are showing.

Research by Canadian disease specialists estimates the actual number of cases in Egypt may be closer to 20,000, using a mix of flight data, traveller data and infection rates.

Egypt has so far reported 210 cases of the virus and six deaths.

There are tens of thousands of prisoners inside Egypt's unhygienic and poorly ventilated prisons.

An Egyptian human rights defender remained in custody late on Wednesday after three others were freed following a protest they held in Cairo, calling for the release of prisoners to prevent the spread of the coronavirus pandemic.

Laila Soueif, 64, was not released along with her sister, the novelist Ahdaf Soueif, Mona Seif, and political science professor Rabab el-Mahdi, who were picked up after demonstrating in front of the government headquarters in central Cairo earlier on Wednesday.

Officers told them they were not allowed to protest. The four women held posters with demands to release prisoners, including their family members held in pre-trial detention.

In a live video shared on social media, police can be heard telling the women to go with them and discuss the matter further, as well as demanding that they stop filming.

Translation: A despicable and cowardly system could not handle four women from the families of those imprisoned standing in front of the cabinet holding up signs which demand the release of prisoners. Release prisoners due to the spread of coronavirus. They are arresting people for saying that others have the right to live. Release prisoners - this epidemic will not differentiate between one person and the other.

Human Rights Watch (HRW) has urged the UAE to release prisoners living with HIV and other underlying health issues who are particularly vulnerable to coronavirus, as more cases of Covid-19 are reported in the country, according to a statement released on Thursday.

“The UAE authorities should immediately consider the appropriate release of the most vulnerable prisoners, as well as unjustly detained prisoners who should not have been jailed in the first place," said Michael Page, deputy Middle East director at HRW.

Activists in Saudi Arabia have been ramping up their campaign to highlight the detention of political activists, citing fears of the spread of the coronavirus in unsanitary conditions behind bars.

Loujain al-Hathloul, who campaigned against the ban on women driving before being detained in May 2018, has had her trial postponed due to a temporary suspension of courts caused by the outbreak of the virus.

🔴 BREAKING
Saudi authorities cancelled the trial session of both
- Loujain al-Hathloul
- Mayaa al-Zahrani
due to a two-week closure of the court, caused by spread of #CVID19.
We, thereby, call upon authorities to release them both immediately.#المعتقلون_بخطر_كورونا pic.twitter.com/UwDcHktJcR

The hashtag "prisoners are in danger of contracting corona" (#المعتقلون_بخطر_كورونا) has been used to call attention to the dangers that the prisoners are currently facing.

🔴Independent human rights activists hold a peaceful gathering in front of the Saudi Embassy in London to call upon Saudi authorities to release all the prisoners of conscience immediately (including Palestinians & Jordanians) due to the spread of #CVID19.#المعتقلون_بخطر_كورونا pic.twitter.com/2d7ABIGO6C

Israeli authorities have informed Palestinians held at the Megiddo prison in Israel that four cases of the novel coronavirus have been detected inside the facility, according to a Palestinian group.

The Palestinian Prisoners' Society (PPS), an organisation campaigning for Palestinians imprisoned by Israel, said on Thursday that four prisoners in Megiddo's sections 5, 6 and 10 were confirmed to have contracted Covid-19 through contact with an Israeli investigator.

A spokesperson for the Israeli Prison Services (IPS) said in a press statement on Thursday that the prison had no confirmed cases of the virus.

“In the Megiddo prison, four detainees without symptoms were isolated according to the Ministry of Health guidelines after suspicion that they had come into contact with a patient a week ago,” the spokesperson said.

But the PPS has nonetheless called on authorities to intervene and protect Palestinian detainees from the coronavirus.

Reports of cases in Israel's notoriously overcrowded prisons began to emerge last week, with rights groups warning that poor living conditions and medical negligence in prisons may compound the danger of an outbreak.

Palestinians have expressed concerns that the Israeli government and prison authorities are not taking proper measures to prevent the spread of the virus and treat those who may become sick.

Some 5,000 Palestinian prisoners languish in Israeli custody, according to Addameer, a prisoners' rights group.

Syria too has seen calls for prisoners to be released amid the pandemic, despite government accounts that there have been no confirmed cases of Covid-19 in the country thus far.

In light of the Corona virus outbreak that devastates the World, we urge the UN, H.R. Orgs & countries which respect human rights 2 impose more pressure on the Regime 2 release tens of thousands of detainees stuck in concentration camps and prisons.#Save_Syrian_Detainees #Syria

According to a report by Human Rights Watch, tens of thousands of people are detained in Syria’s prisons, where the ramifications of the coronavirus pandemic could be catastrophic.

“What is terrifying to consider is that authorities knew of and enforced these conditions by denying detainees adequate food, medical care, sanitation supplies, ventilation and space," she said.

The condition in Syrian cells was described as "inhuman" by some of the former detainees interviewed by HRW.

Journalists and activists are calling attention to several cases of people imprisoned in Iran, which is one of the countries worst affected by Covid-19 outside of China.

Iran's Nelson Mandela, the human rights lawyer Nasrin Sotoudeh, is on hunger strike in Evin Prison amid the country's deadly #coronavirus outbreak. She is demanding freedom for all of the country's political prisoners. #FreeNasrin https://t.co/S8DdRbfDYp

Iran's health ministry said on Thursday that a person was dying every 10 minutes from the Covid-19, which has killed at least 1,284 in the country, with hundreds of new cases reported daily.

Jailed British-Iranian aid worker Nazanin Zaghari-Ratcliffe was temporarily released from an Iranian prison for two weeks alongside 85,000 prisoners who were let out as part of the government's efforts to combat the spread of the coronavirus.

However the virus has already claimed the life of jailed economist and writer Fariborz Raisdana, according to reports.

Sad news! Outspoken Iranian economist and writer Fariborz Raisdana has died in a Tehran hospital after contracting #coronavirus. Raisdana, a member of Iran's Writers Association, had been arrested and sentenced to prison in the past over his criticism of the Iranian establishment https://t.co/hdA29K8qGA