Six apps and a website: Saudis confused by kingdom’s response to coronavirus

Saudi Arabia has asked residents to use a multitude of different health apps, creating an impression of an unorganised response to the virus Saudi Arabia has been struggling to contain the coronavirus, but instead of introducing a unified platform to organise its strategy, it has adopted six different online apps and a website with overlapping services, leaving its response chaotic and residents confused. Saudi authorities have imposed some of the toughest coronavirus restrictions in the world, however, they have so far failed to streamline the platforms that facilitate people’s access to testing, contact-tracing, the follow-up on isolation cases and adherence to curfew.

Apps developed by the health ministry, the Saudi Data and Artificial Intelligence Authority (SDAIA) and at least one private company are competing with one another for space in people’s smartphones.

Residents who spoke to Middle East Eye on condition of anonymity complained about the lack of necessary data integration and some have criticised the kingdom’s late technological response.

Five out of six

Out of the six apps, Tawakkalna is the only one that seems to be universally accepted by Saudis.

The app, developed by the SDAIA, has been popular because of its usefulness during curfew. Through Tawakkalna, people can request authorisation to move around, follow-up on their permits and are notified when they are near infected or isolated areas.

The app has proven to be practical for showing documentation to the police when stopped during curfew.

Still, a charity worker in Riyadh said the government was late in bringing about Tawakkalna, which was introduced on 5 May, in the middle of the fasting month of Ramadan, after two phases of the lockdown had been eased.

The kingdom has recorded more than 161,000 Covid-19 infections, the highest number among Gulf countries, with over 1,300 deaths, following a rise in new cases in the past two weeks.

“At the time, the government tried to solve the problem by issuing permission papers to companies.”

Charities had to apply for such permits to feed people stuck in the lockdown. A foreign embassy in Riyadh was forced to outsource its food distribution to a hypermarket chain after thousands of its citizens in the kingdom were stranded or left without food.

While Tawakkalna gives the impression that it could function as a widescale contact-tracing app, the SDAIA rolled out Tabaud, an app dedicated only to contact-tracing, two months later.

In between the two releases, the ministry of health came up with Tetamman, whose main role is to follow up on the cases of people in isolation.

One person told MEE that he believes it to be the only app to have come at an appropriate time.

Tetamman helps Saudis book an "appointment for the Covid-19 test, know test results, contact with 937 to ask for help, daily symptoms check-up, update the data of who has contacted a positive case", according to its information page.

Tabaud came out on 14 June. The SDAIA said the app was developed "in close cooperation with the Ministry of Health as the official contact tracing app in Saudi Arabia".

Abd al-Aly called on "people to take the self-evaluation exam on the Mawid app, use the Sehhaty app for those who are not experiencing symptoms".

Developed by the health ministry in 2017, Mawid has been used by patients to book, cancel or reschedule appointments at primary healthcare centres and to manage their referral appointments.

Mawid was updated four weeks ago to include a “new and improved Covid-19 survey”, suggesting that the ministry has recalibrated the app for the pandemic.

Under the supervision of the health ministry, Sehhaty was developed by Lean Business Services, a Riyadh-based private firm involved in, among other things, web development, video and security surveillance.

Abd al-Aly caused confusion among the Saudi public when he mentioned Sehhaty, as it carries a name both identical to a website handling mass drive-through testing for Covid-19 and similar to a health ministry app called Sehha, developed three years ago to provide people with medical advice.

Sehhaty was developed 10 months ago, before the global outbreak of coronavirus, and offered users health consultations, medical e-services, school screening results, sick-leave sharing and other services.

Last month, the app stepped into the territories of Mawid and Sehha by providing the options of booking appointments for Covid-19 testing and self-assessment tests.

Such is the case of private developers seizing the opportunity the pandemic has offered to sell their products.

"When governments don't have a proper IT governance vision or at least a protocol at the top, private firms try to sell their unsophisticated products,” said a software engineer working with Qatar's Ministry of Interior and associated with Qatari contact-tracing app Ehteraz.

“Instead of an application solving a single problem by merging different functionalities, the public is flooded with a lot of apps," he told MEE.

A foreign embassy employee in Riyadh said he tried both the Sehha and Sehhaty apps but was unable to enter his data into the latter because he did not receive the one-time password (OTP), while the former was “a waste of time”. Coronavirus: Why digitisation is a double-edged sword for the Middle East
Read More »

A longtime Riyadh businessman, who is now stuck in Jeddah due to the lockdown, said he has already deleted three apps among the many he had installed to save on phone space.

The businessman said when his son was struck down with a fever, it took eight days for one of the apps to fix an appointment at a health facility. That it took this long to process a person showing coronavirus symptoms was alarming, he added.

Last week, a text message urging people to download Sehha, the three-year-old app 116MB in size, made the rounds. Some found it strange that Abd al-Aly had suggested people use Sehhaty, a commercial app, when his ministry already has an app with a similar sounding name.

One Saudi father said he thought Sehhaty was the old app he used to book his children's vaccinations, instead of Sehha. He also said he tried booking a test, but no available slots were available.

Meanwhile, a Dammam-based businessman said the only app he uses is Tawakkalna for when he needs to leave his house during curfew.

"Police fix the fine after calculations based on the app," he said, adding that he believes all the apps that have been introduced are an “embarrassment”.

"They ask for our residence location. They know when we go out and come back."

MEE contacted the Saudi health ministry for comment, but had not received a response by the time this article was published.

For a contact-tracing app to work at its optimal performance, the entire population in the country has to accept and use it voluntarily.

There's an issue of confidence, "if technology is to play an effective role in tackling the virus", as Claudio Guarnieri, Head of Amnesty International's Security Lab, pointed out last month.

In Saudi Arabia’s case, the problem is not just the confidence of people, but also a series of other factors, including lack of clear information, the government’s lack of vision, the simple lack of space in people's phones and their past experiences with the existing apps.

A source working in a bank in Qalat Bishah, a town in the southwestern province of Asir, took his roommate to the hospital after a phone call informed him that he had tested positive for coronavirus.

'The very idea of this many independent apps is absurd'

“We were never asked by the hospital to download any app," he said.

"Last week when another friend had symptoms, the hospital said he will be notified through the Tawakkalna app he installed, but that didn't happen. These incidents gave me the impression that apps are just for show."

A software architect working with Oman's Ministry of Health said the confusion surrounding the apps is a case of bad IT infrastructure management with a tendency for outsourcing services.

"The very idea of this many independent apps is absurd. Many of these apps have overlapping features."

He pointed out the phenomena of developers meeting ministry higher-ups with proposals of piecemeal apps.

"If a ministry doesn't have an IT department with software activities, they simply buy and install,” he said.

As a result, “there will not be any integration between these independent apps and databases. This is what Saudi Arabia might be experiencing."

Apps alone will not help tackle the virus, but back-end support run by healthcare response volunteers would.

The software architect described software initiatives in some countries as an important part of the Covid-19 response, such as the data collection of people in quarantine, including medical history, symptoms and travel history.

“Every risk factor … is fed to the app. Depending on the risk score, the health ministries classify them into high- or low-risk groups,” he said, adding that high-risk people are meant to be contacted without delay.

"But often that doesn't happen due to shortage of human resources. Then people stop trusting apps."

After many expatriates criticised Saudi Arabia’s initial reluctance to enrol volunteers, the kingdom promised yet another app, called Thadawwu, for volunteers to register.

However, the seventh app has so far failed to materialise. 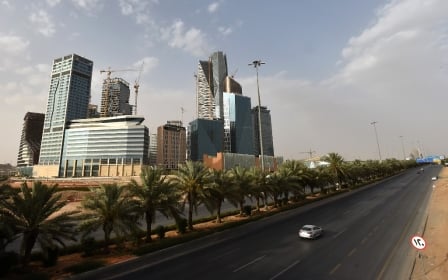