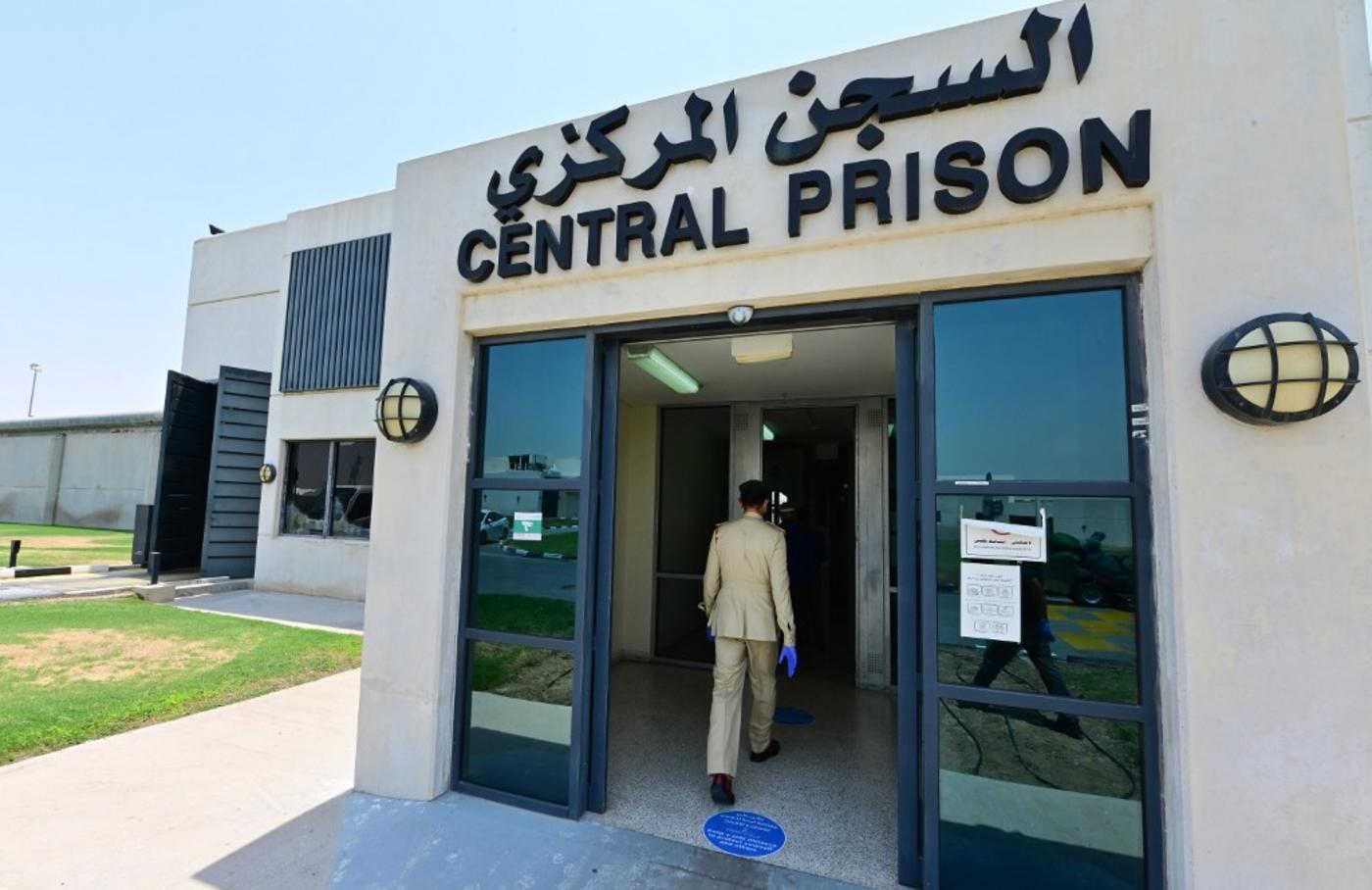 A policeman enters Dubai's al-Awir central prison in the UAE amid the Covid-19 pandemic, on 21 May 2020 (AFP)
By
MEE staff

Inmates in at least three detention facilities in the United Arab Emirates have been infected with coronavirus, Human Rights Watch said on Wednesday, warning of the danger of a widespread outbreak among prisoners.

According to the families of detainees who spoke to the New York-based rights group, a growing number of prisoners in al-Wathba prison near Abu Dhabi, and al-Awir prison and the new al-Barsha detention centre in Dubai have shown Covid-19 symptoms or tested positive for the illness.

The group said that prisoners there, including those with chronic health conditions, have already suffered from medical negligence and unsanitary conditions made worse by overcrowding.

“The best way for UAE authorities to allay concerns of prisoners’ family members is to allow inspection by independent, international monitors.”

HRW said that at least six prisoners in al-Wathba prison were experiencing Covid-19 symptoms in mid-April.

Meanwhile, relatives of a detainee in the al-Barsha detention centre said that some new arrivals at his block in late April showed Covid-19 symptoms. The block was already overcrowded with detainees sleeping on the floor due to a lack of beds, his family said.

Prison guards then administered tests to everyone in the block, and in early May they were all transferred to al-Awir central prison where they were held for 17 days of quarantine “in conditions that resembled solitary confinement”.

“They had no contact whatsoever with the outside world. We had no information where he was or if he was okay,” his relative, who lives outside the UAE, told HRW.

“I called the prison again and again. They wouldn’t tell me anything. I asked my lawyer to find out. I asked a friend to go to the prison and inquire, [and] they finally acknowledged to him that my brother was alive. My brother later told me that those 17 days he spent in solitary were worse than all of the time he spent in detention [three months] before it.”

Another human rights organisation, We Record, said on Wednesday that it has documented at least 30 prisoners who showed coronavirus symptoms in three wards at al-Wathba prison.

Sofia Kaltenbrunner, programme officer at the International Campaign for Freedom in the UAE, said the further spread of the virus in al-Wathba prison and others could have "catastrophic effects" due to the absence of medical care.

She told Middle East Eye that Abdullah Awad al-Shamsy, an Omani national detained in al-Wathba for two years, and who suffers from underlying health conditions, has tested positive for the coronavirus.

"According to our information, he has not been allowed to see a doctor at all, not only recently, but in the whole time he spent in detention," she said.

"He was arrested in August 2018 on charges of showing sympathy to Qatar. He was a student at the time. He was only 17 years old."

The UAE released over 4000 detainees at the beginning of the holy month of Ramadan in late April, but those released did not include political prisoners.

The number of coronavirus cases in the UAE continues to rise, with a total of 39,904 infections and 283 deaths reported by Tuesday.