As Covid-19 has disproportionally hit black, Asian and minority ethnic (BAME) individuals in the UK, Muslims are set to mark the holy month while combating Islamophobia 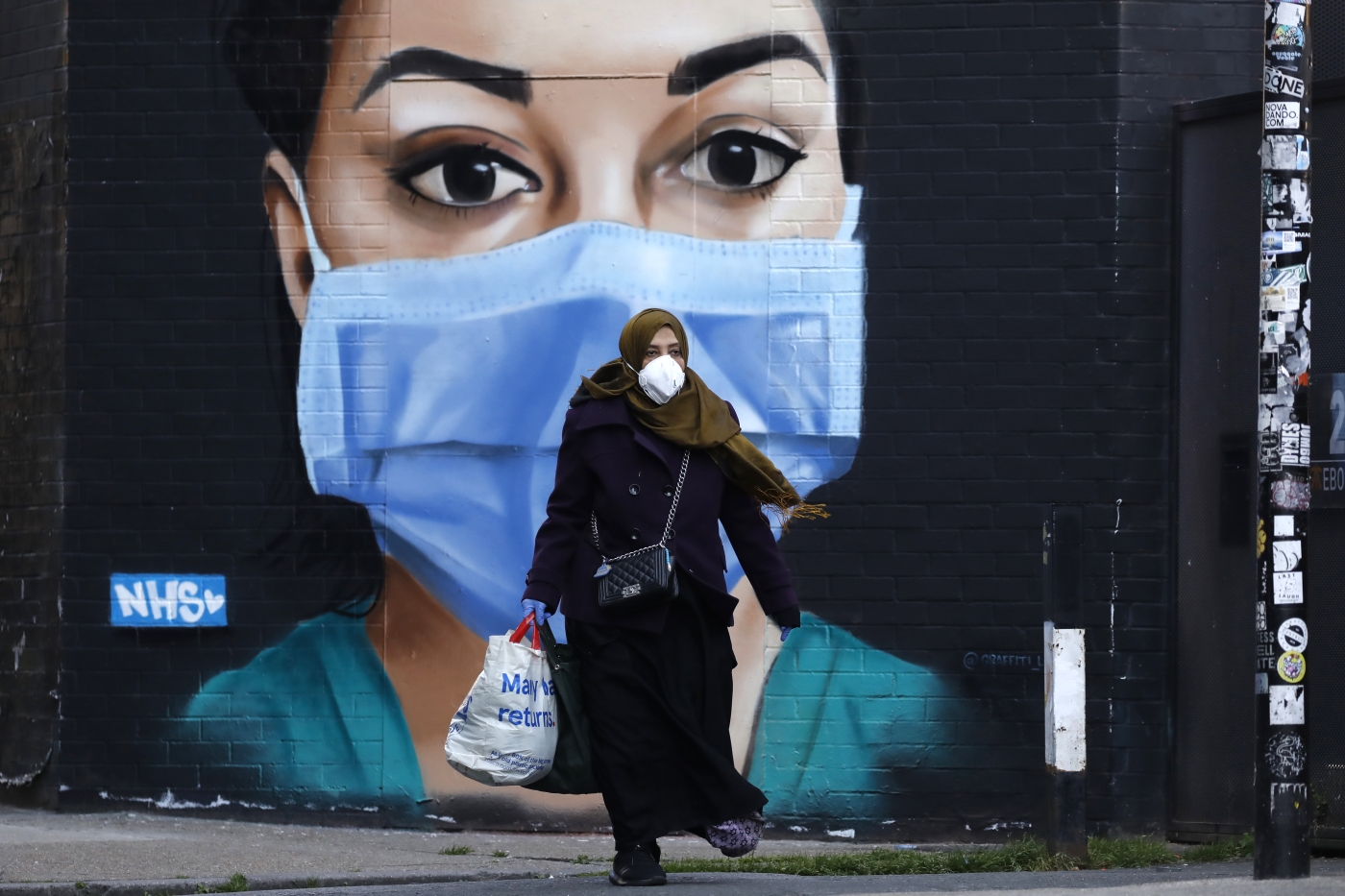 As of March 2019, 20 percent of the over 1.2 million staff employed by the NHS were recorded as BAME, including 44 percent of medical staff and 43 percent of senior NHS doctors (AFP)
By
Yasmina Allouche

A number of leading Muslim British personalities have lent their support to an online campaign urging Muslims to observe the holy month at home in order to ease pressure on the National Health Service.

The holy month of Ramadan is expected to start on Friday and is a busy occasion usually marked by communal meals and prayers.

However, due to the coronavirus pandemic, Ramadan is expected to look very different this year with Muslim organisations urging communities to respect social distancing measure and observe the month safely.

Actor and singer Riz Ahmed, journalist Mehdi Hasan and London Mayor Sadiq Khan were some of the well-known personalities featured in the #RamadanAtHome clip shared on social media, along with frontline staff from the NHS, London Metropolitan Police and the London Ambulance Service.

This #Ramadan we are:

Staying at home
Praying for the world, from home
Opening our fast at home
Doing #iftar at home

to protect our NHS and save lives #StayHomeSaveLives #RamadanAtHome pic.twitter.com/6hlBGLFnBP

So, me, London mayor @sadiqkhan, my old school mate @rizwanahmed, @sayeedawarsi, @tezilyas, @nazshahbfd, @konnie_huq, and a bunch of other British Muslims made a video urging everyone to stay at home this Ramadan.

Please watch, share and then let's get #RamadanAtHome trending! pic.twitter.com/TohcLGkL7q

The campaign comes the same week as news of the deaths of Egyptian doctor Medhat Atalla and Libyan orthopaedic surgeon Sadeq Elhowsh after contracting coronavirus.

Atalla worked at Doncaster Royal Infirmary, while Elhowsh was honoured with a tribute by NHS staff at Whiston Hospital in Merseyside.

Their deaths are the latest in a growing list of frontline doctors and medics in the UK who were Muslim, and/or originally from the Middle East and North Africa, who have succumbed to the Covid-19 virus which has claimed the lives of more than 18,000 people in the UK and over 184,000 worldwide.

The first 11 doctors to die of the virus in the UK were all black, Asian and minority ethnic (BAME), prompting calls to better highlight the essential services provided by those from minority backgrounds, who often suffer discrimination and negative portrayal in the country.

Last week, the hashtag #YouClapForMeNow went viral online thanks to a video featuring diverse UK residents reciting an anti-racism poem highlighting the key role immigrant workers have been playing in the Covid-19 outbreak.

As of March 2019, 20 percent of the over 1.2 million staff employed by the British health service were recorded as BAME, including 44 percent of medical staff, 43 percent of senior NHS doctors and 47 percent of junior doctors.

A report from the Intensive Care National Audit & Research Centre found that 30 percent of Covid-19 patients were from BAME backgrounds despite making up only 13 percent of the UK's population.

Britain’s Muslims are amongst the hardest hit by the Covid-19 pandemic, with reasons cited including living with larger families and being more exposed to carriers, particularly if they come into contact with workers in certain sectors.

Despite helping to produce protective gear for health workers and gathering donations for vulnerable communities during the coronavirus crisis, Muslims in the UK have been singled out for criticism.

The most upsetting thing about this is the lack of recognition of Muslim doctors who have died after contracting covid-19.

And the lack of recognition of on calls, time away from family, and other lifelong sacrifices essential workers make https://t.co/0Fu8XvbHOu

US President Donald Trump has also sparked a backlash online for making unfounded claims that mosques may receive special treatment during the coronavirus lockdown after he retweeted conservative author Paul Sperry who questioned whether authorities would "enforce the social-distancing orders for mosques during Ramadan (April 23-May 23) like they did churches during Easter".

As Trump incites Islamophobia to deflect blame and rile his base, this is what American Muslims are doing in Texas.

Trump has yet to comment on anti-lockdown protests led by his supporters in half a dozen US states in recent days.

Pierce and Trump's tweets are part of a tide of Islamophobia from numerous far-right groups looking to pin blame for the virus’ spread on Muslims.

Old videos showing Muslims worshipping in large crowds have been reshared to erroneously claim that Muslims have rejected self-isolation measures.

But in the video, it is clearly raining. It's been wall-to-wall sunshine in London since the new measures came into force.

According to the Muslim Council of Britain (MCB) nearly 400 mosques and prayer facilities have suspended congregations nationally. The MBC has also published clear guidelines on self-isolation and how Muslims can observe Ramadan at home.

Many charities have also launched emergency appeals to help during the crisis and popular communal gatherings such as those organised by the Open Iftar project, known for providing free meals every evening during Ramadan, are continuing their work online.

Despite this, Muslims have seen an increase in anti-Muslim sentiments. Tell Mama, which monitors anti-Muslim hate crimes in the UK, has documented numerous examples of harassment of Muslims and has been forced to to dismiss false claims made on social media that Muslims were breaching the lockdown.

Similar Islamophobic claims that Muslims pose a higher risk of spreading the virus than other citizens have also surfaced in France and Belgium.

Continue to look for ways that some media outlets instrumentalize #COVIDー19 to heighten #Islamophobia.

Thanks to @Rowaida_Abdel for grabbing this screenshot before @TheEconomist took down the story and the tweet. pic.twitter.com/ysVqZz84H1

1- We have "journalists" in France (our French Fox News, @bfmtv) trying to put the blame on the spread of #COVID19 in #France on Muslims and #Ramadan.🤷🏻‍♀️ https://t.co/wRoIYTls8T

A study carried out by Imran Awan, professor of criminology at Birmingham City University, and Roxana Khan-Williams found that Islamophobic online "cyber hubs" were being formed linking Muslims to the spread of Covid-19, spreading anti-Muslim memes and sharing fake news stories.

The Conservative Party in the UK has regularly been accused of propagating Islamophobia, including Prime Minister Boris Johnson, who promised to launch an inquiry into all forms of discrimination which is yet to be published.

The Muslim Doctors Association urged for more responsible reporting “that celebrates the good work that Muslims are doing in the UK, despite themselves facing higher risks, and that fosters a sense of community and solidarity during this challenging time”. 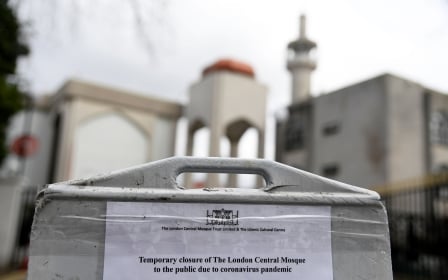