This country doesn't want its Syrian refugees to leave

Since the start of Syria's civil war, thousands have found shelter in Armenia, their ancestral home 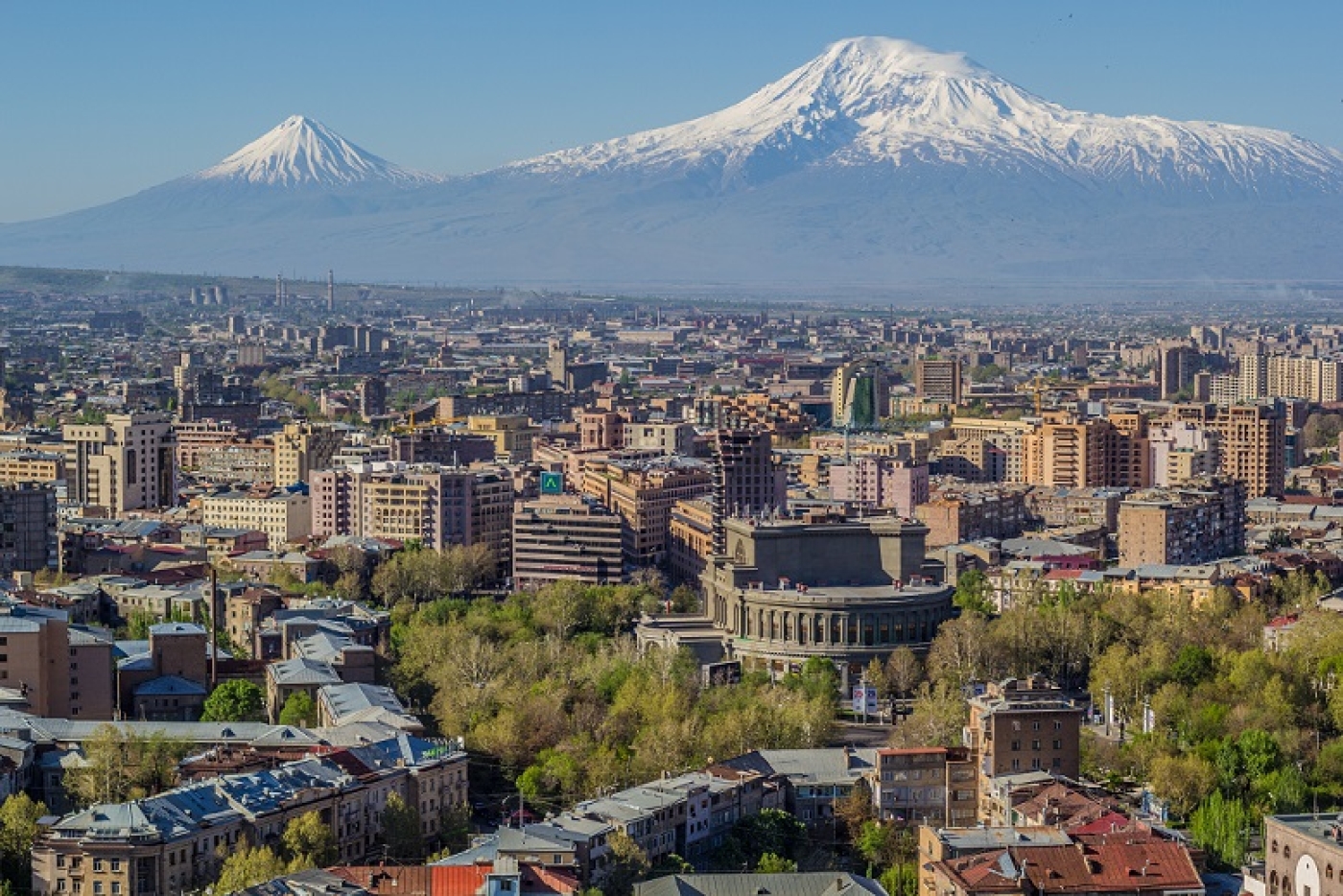 More than 22,000 Syrians now live in Armenia, many in the capital Yerevan (Wikicommons)
By
Laura Secorun

YEREVAN - Sevak Baghdasarian had just gotten his accounting degree and was about to join the military service when the Syrian conflict broke out.

The 26-year-old from Aleppo knew that he could be made to stay in the army for years. The prospect of fighting horrified him. So he dodged the draft and got a one-way ticket to a country where he knew he would be safe. Not Germany, but Armenia, his ancestral homeland.

I came on vacation as a teenager because I wanted to see my homeland. I never thought I was going to live here

Since 2011, thousands of Syrians have followed in Baghdasarian’s footsteps and found refuge in this small country in the Southern Caucasus. Today, according to UNHCR, Armenia is the third-largest refugee host country in Europe per capita - with five refugees for every 1,000 inhabitants.

Why did this post-Soviet nation welcome so many Syrians like Baghdasarian? Because Syria once welcomed them, ethnic Armenians fleeing danger and death.

Armenians used to live in peace inside the Ottoman Empire until World War I, when, in a desperate attempt to stay in power, the government of the Young Turks adopted a forceful policy of cultural homogenisation. Armenians were the designated scapegoat, and their ethnicity and religion, Christianity, were portrayed as an obstacle in the way to the empire’s glorious future.

In 1915, the Turkish troops began an eight-year-long campaign of attacks against the Armenian population, which would come to be known as the Armenian genocide. Over a million Armenians died during that time, yet many more would have perished were it not for Syria’s help.

Turkey refutes this version of events, rejects the term "genocide" and insists that the killings were part of broader skirmishes that were part of World War I. It says there were heavy casualties on both sides.

As Turkish soldiers chased Armenians into the desert of northern Syria, the native population rescued, sheltered and fed thousands of them. The survivors then settled largely around Aleppo, where they gained a reputation as skilled craftsmen and lived in harmony with their Muslim neighbours.

That is until, a hundred years later, Syria plunged into a civil war.

A shoulder in difficult times

Many Syrian-Armenians backed President Bashar al-Assad and his government in hopes of protection because they feared their Christian beliefs would make them a target. Rebel forces and militant groups ransacked their neighbourhoods and burned their churches, forcing thousands to take the same escape route their grandparents once took - only this time, in the opposite direction.

This sudden exodus caught their ancestral home by surprise. “When the Syrians started arriving, we did not have the necessary infrastructure in place,” admits Anahit Hayrapetyan, the external relations associate of UNHCR in Armenia.

What began as a trickle escalated to over 22,000 arrivals, forcing Armenia’s government to pool its meagre resources to provide them with shelter. Virtually all Syrian refugees who have arrived are of Armenian descent, and that's not because the government is actively turning away non-Armenian Syrians, but because its mostly Syrians of Armenian descent who are seeking asylum in the country.

Non-Armenian Syrians have made the 350km trip from one country to another, but they are exclusively the spouses of ethnic Armenians, Hayrapetyan tells Middle East Eye.

According to Hayrapetyan, were other non-Armenian Syrians to seek refuge in the country, they too "would surely be granted asylum in Armenia, followed by refugee status".

In response to the refugees's arrival, the Armenian diaspora set up various non-profits to provide everything from food to vocational training. Next, Syrian children were allowed to join Armenia’s public schools and the ministry of diaspora set up a fast-track system so refugees could apply for nationality.

In 2015, Armenia’s then-president, Serzh Sargsyan, defended his country’s generous refugee policy in an address to the United Nations General Assembly. “Armenians know well the fate of the refugees, of the exiled and expelled,” he said. “The Armenian Genocide should have claimed many more lives, unless a number of nations, our friends, had given us their shoulder in those difficult times.”

'We're stuck': The Syrians stranded in airports around the world
Read More »

Today, UNHCR says there are approximately 15,000 Syrians left in Armenia. Most of them are largely integrated into the country’s social fabric and their presence has done much to enliven its capital, Yerevan.

The city is home to myriad of new, Syrian-owned businesses – from the trendiest nightclub to popular restaurants serving Arabic dishes to locals looking for an alternative to Russian-style food. There is even an underground market solely dedicated to Syrian craftsmen specialising in clothing and fine jewellery.

That’s what Baghdasarian’s family does now. His father and elder brother followed him to Armenia and re-launched the silver-crafting business they had back in Aleppo.

Making a living in Armenia, however, is far from easy. Some wealthy Syrians may have been able to use their foreign accounts to buy penthouses in downtown Yerevan but most arrived with little to their name, only to find a stagnant job market.

According to the Asian Development Bank, a third of Armenians live below the poverty line and the government’s willingness to welcome refugees has done little to offset the shortage of employment opportunities and affordable housing.

Even when Syrians find jobs, nothing can offset the emotional trauma of forced exile. Most refugees came to Armenia thinking they would be go back home in a few months. Many still have family members living among the rubble in Aleppo.

Baghdasarian had only visited Armenia once before moving there. “I came on vacation as a teenager because I wanted to see my homeland,” recalls the 32-year-old. “I never thought I was going to live here.”

Armenians used to think of Syrians as being wealthier, which means their recent status as refugees has caused some cognitive dissonance. And that’s not the only cultural mismatch between the two communities. While Syrian-Armenians share many traditions with local Armenians, they do not speak the same dialect and write it differently, using the Arabic alphabet.

Social integration, therefore, may take longer than expected. Still, various civil society organisations are working to speed up the process. Baghdasarian is a member of KASA, a Swiss-funded non-profit that works to strengthen the bond between young refugees and local Armenians. “Our goal is to broaden perceptions,” says Zara Harutyunyan, who works for the NGO, adding, “it is a slow process but it works.”

Each week, her team organises a different social activity, from hikes to board game tournaments. Today, they are preparing a Syrian speciality, tabouleh. A dozen young men and women stand around a few tables covered in produce. They seem nervous as Harutyunyan explains the programme but, after just a few minutes of chopping and stirring, the room is filled with laughter.

A friend of Baghdasarian’s from Aleppo, who prefers to remain anonymous, is also in the workshop, advising local Armenians on how much mint to use in the salad. She says KASA has helped her feel at home in Armenia. “I don’t see myself as a refugee. I don’t even like the word,” she says.

Russia’s recent urge to start “voluntary” refugee returns has prompted many Syrians in the region to consider the option. But in Armenia, most refugees have ruled out going back. She argues that the rise of hardline militant groups in the region makes many Syrian-Armenians believe that their days of living in peace as Christians are over.

“We used to have our own schools and churches,” she explains, “that would not be possible now.”

'They escaped there. I escaped here'

Armenia doesn’t want its Syrians to leave either. Unlike Lebanon or Jordan, which often refer to refugees as an economic burden, Armenia’s government sees them as an opportunity to reduce the migratory deficit and generate jobs.

This is my country but it’s hard to live in it. People are good but they think so different than me

“There’s no doubt Syrians are helping develop the country's economy,” says Hayrapetyan, the UNHCR spokesperson. Still, she claims this preference for Syrians is not fair to the hundreds of refugees from countries like Iran, Ukraine or Ethiopia, who do not get the same level of governmental support or social acceptance.

For Baghdasarian, going back to Syria is not even an option. If he did, he would be forced to join the military, where many of his friends have been serving for seven years now. But he doesn’t want to stay in Armenia either, because, even after six years in it, he still feels out of place.

“This is my country but it’s hard to live in it,” he says. “People are good but they think so different than me.” He had a lucrative job offer in Dubai, but he could not take it because the United Arab Emirates does not accept refugees. Now he dreams of getting a visa for Canada or the United States. In the meantime, he is practising his English and trying to make western friends by working as a tourist guide.

Today, he’s taking a couple of middle-aged American women on a tour of the Armenian Genocide Museum. They trio walks along the quiet hallways looking at photos of the victims. An emaciated child. A distraught mother. An old man holding his son’s skull.

Baghdasarian lingers behind to watch a video from Syria. The screen shows the image of an old church tower in a small village, flanked by grassy hills. “That’s the town were my grandparents grew up,” Baghdasarian says with a faint smile. “They escaped there. I escaped here.”