Ankara's new strategy to prioritise first doses has increased the pace of vaccinations, but its sustainability and the Delta variant remain concerns 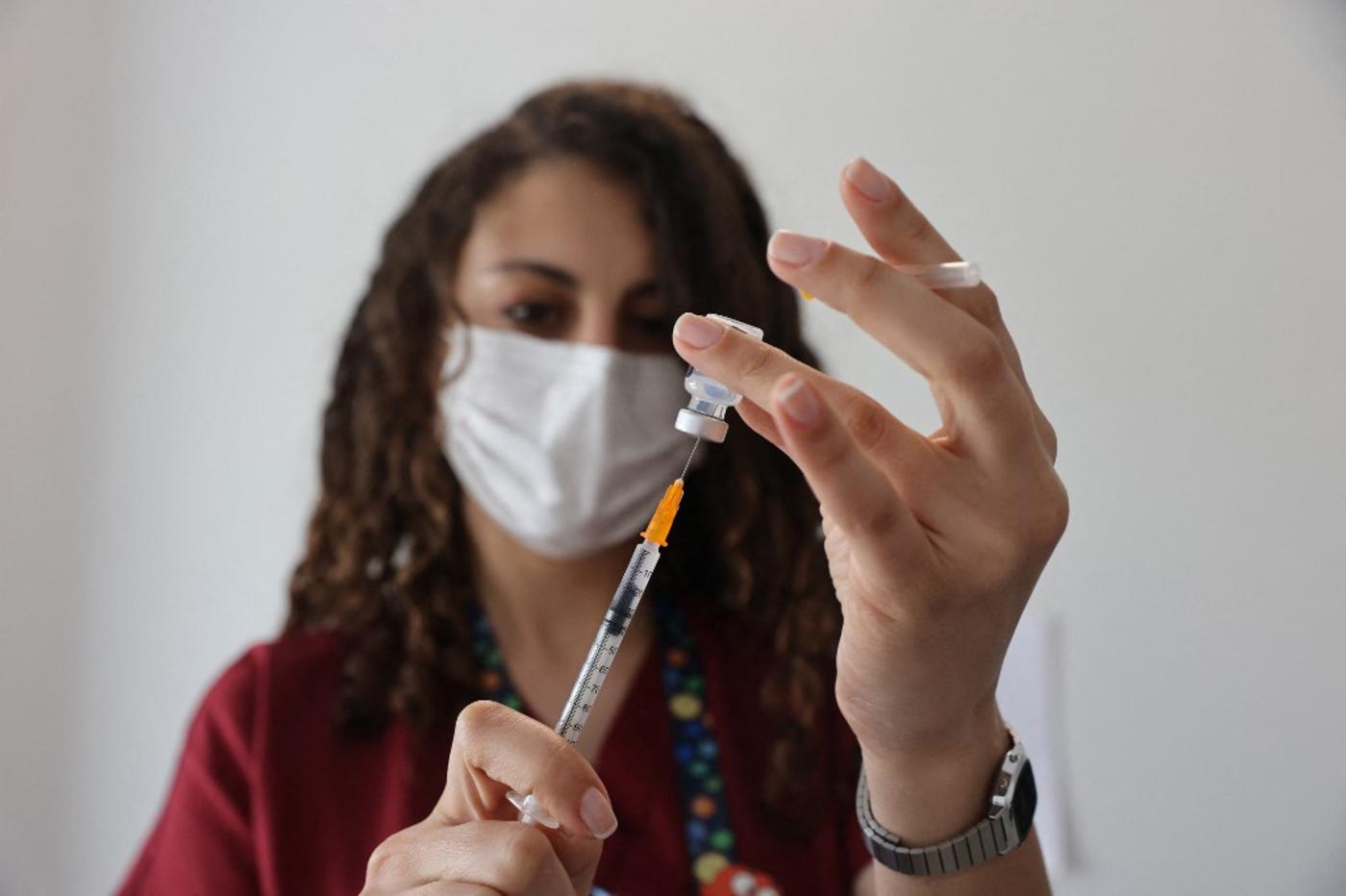 A nurse prepares to administer the second dose of Pfizer-BioNTech Covid-19 vaccine to a patient at a hospital in Ankara, on 3 May 2021 (AFP)
By
Ragip Soylu
in
Ankara

Turkey has accelerated its Covid-19 vaccination drive this month, occasionally passing 1.5 million jabs daily, meeting a milestone and becoming one of the best-performing countries in terms of total doses administered in June.

Health Minister Fahrettin Koca earlier this week proudly declared that Turkey administered more jabs than any other country between 14-20 June. “Every day we vaccinated 1.45 of every 100 people,” he said.

The country’s daily new Covid-19 cases also dropped significantly, from more than 60,000 to only around 6,000 this week, after a month of strict curfews and restrictions. President Recep Tayyip Erdogan announced earlier this week that all restrictions will be lifted from 1 July, except mask-wearing requirements. 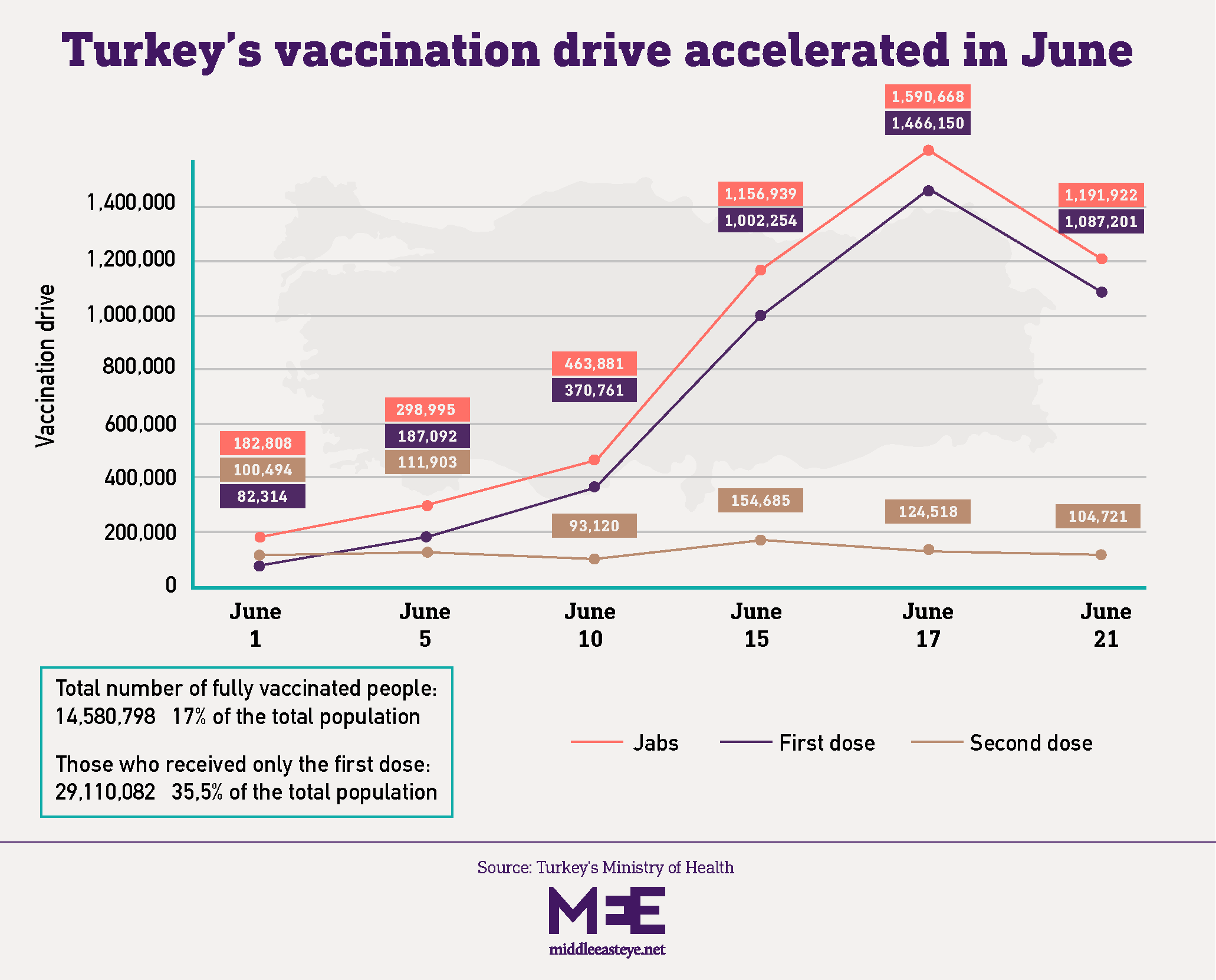 The current situation is starkly different to April, when Turkey was recording 300 Covid-related deaths a day.

Critics then blamed the government for inconsistent policies and poor management of the vaccine strategy, that solely depended on Chinese-made Sinovac, a vaccine reported to have lower efficacy than others available. Koca confessed the same month that Sinovac wasn’t respecting its delivery commitments, warning that the coming two months would be hard.

But later this year, Erdogan’s government signed a huge vaccine deal with Pfizer/BionTech, securing 60 million doses in May. Since then, Turkey's vaccine campaign has taken off.

The government also signed a contract to purchase 50 million doses of Russia's Sputnik V in April.

Many in Ankara have questioned why Erdogan's government hadn't struck such a deal before, particularly considering the Pfizer vaccine's developers are two Turkish citizens, Ugur Sahin and Ozlem Tureci. And on top of that, Turkey took part in the clinical trials of the Pfizer vaccine last year.

A source familiar with the issue told MEE that the government was initially cautious about Pfizer’s vaccine, which uses an innovative mRNA technology.

“They didn’t cross the Pfizer option out, but they thought a traditional vaccine such as Sinovac could have been a better option until Turkey comes up with its own vaccine,” the source said. “Pfizer legally didn’t want to take responsibility for the risk [of harmful side effects] either."

'They didn’t cross the Pfizer option out, but they thought a traditional vaccine such as Sinovac could have been a better option until Turkey comes up with its own vaccine'

After much consideration and debate, Ankara in December signed an initial deal with Pfizer, but for only 4.5 million doses.

Koca said at the time that it took a while to reach an agreement because Pfizer didn’t want to take responsibility for problems that could be caused by the production process. “We decided that the producer’s responsibility would only be limited by the contract’s worth,” he said.

The Turkish official said the idea that Ankara refused to prioritise Pfizer over mRNA concerns was unjustified. “The main issue here is that they didn’t have enough production capacity to deliver more to Turkey,” the official said. “Other allegations are pure nonsense.”

Turkish doctors agree that Turkey's healthcare system always had a large capacity to administer vaccines, the only problem was that it didn’t have the jabs.

“The procurement was the main problem,” Derya Unutmaz, an MD and professor specialising in immunology at the Jackson Laboratory, told MEE. “The capacity of the health workers is really very good. We could see it in January and February, as well with a high vaccination drive."

Unutmaz said the government's current plan to administer the first dose to as many people as possible, as the UK has done, was a correct and effective strategy.

A long way to go

Others underline the fact that Turkey still has a long way to go to reach its goals, as only 17 percent of the population is fully vaccinated.

Bengi Baser, a cardiologist and medical sciences professor, told MEE that most of the fully vaccinated Turkish citizens were health workers or other essential workers, and received their doses approximately six months ago. “Now they will need to get their third dose,” she said. “I really appreciate the pace, but we still have a long way to go.”

With Sinovac seemingly lacking strong efficacy after two doses, a senior Turkish official earlier this week told MEE that the government was soon going to start giving third doses of vaccines, which could either be the Chinese-made jab, Pfizer or Turkey’s own Turkovac.

Yet, the question of sustainability and supply still remains at large, with Turkey experiencing problems receiving enough doses from both Sinovac and BioNTech in the past.

The senior Turkish official said Turkey so far has received 24.5 million doses of Pfizer, and was expecting to reach 30 million towards the end of this month.

“We don’t think there will be further problems with the supply,” the official said. “We made an agreement for 120 million doses in nine months and we are constantly in touch with Ugur Sahin to make sure that we have a good stream of supplies coming up.”

The official said Turkey also plans to maintain the daily one million-dose pace if citizens continue to book out appointments. The government this week authorised vaccinations for everyone above 25 years old.

Another concern is the Delta variant, which could be increasingly transmitted to Turkey due to the country's status as a tourism destination.

Russia, which is seeing a surge in new Covid cases due to the Delta variant, announced that it would restart its flights to Turkey this week. Nearly 90 percent of new cases in Moscow, for example, are the Delta variant.

However, Baser, the cardiologist, said that people shouldn’t feel like they have won the victory against the pandemic.

“The Delta variant is concerning, otherwise the UK wouldn’t close its doors to certain countries,” she said. “We have to be vigilant.”