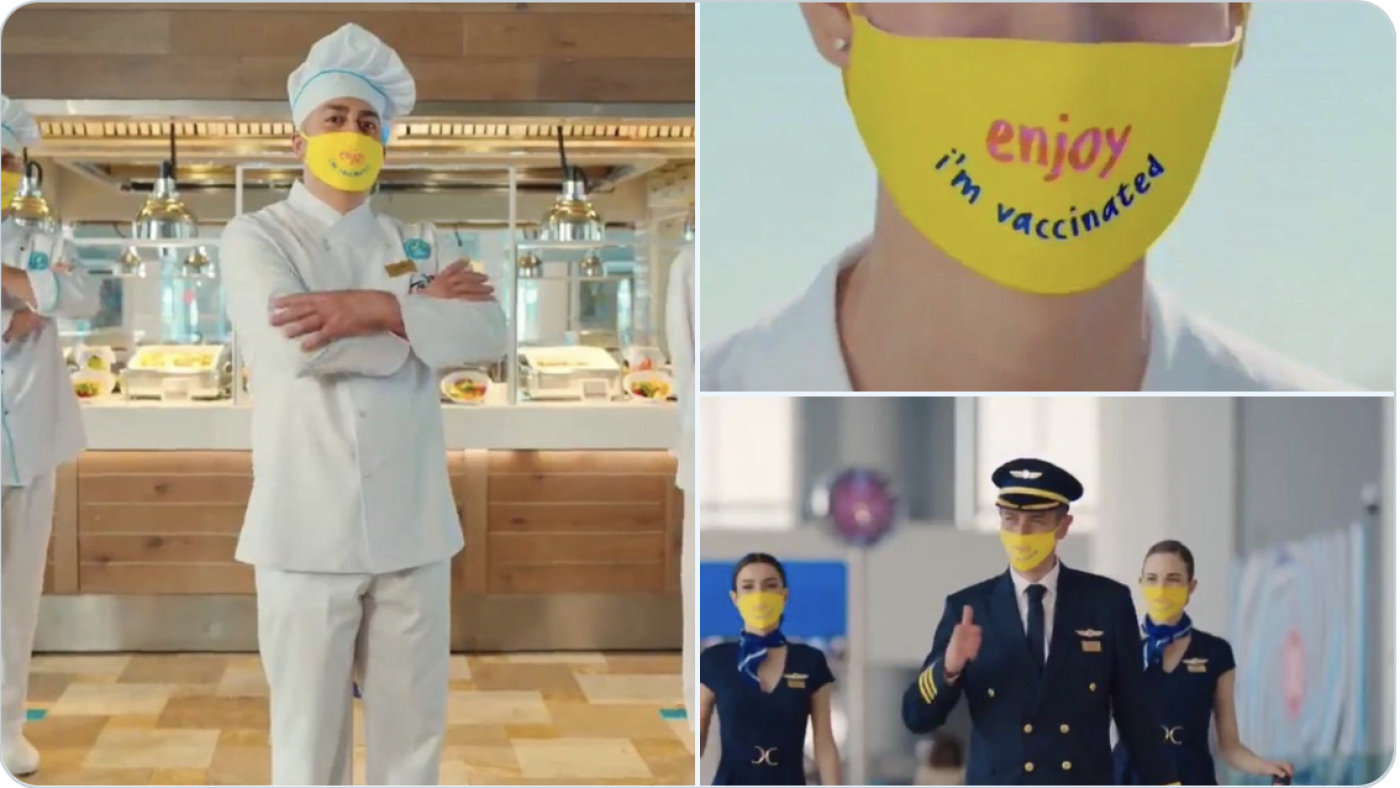 A new video distributed by Turkey's tourism ministry that features Turkish staff wearing masks with the words “Enjoy, I’m vaccinated” has triggered a backlash online, with people likening the masks to cattle tags.

Turkey has been in lockdown for the past two weeks, due to a surge in Covid-19 cases. The Turkish opposition blames the government for not securing enough vaccinations and for a slow start to the vaccination programme.

Huge online outcry in Turkey over this Turkish tourism video, which suggests tourism workers in the country might be required to wear a mask with a tag: “I’m vaccinated”

One of the main factors behind Ankara's decision to reimpose a  17-day-long lockdown - its strictest yet - was to allow for a potential opening ahead of the busiest tourist season.

The Turkish lira has lost nearly 60% of its value in the past two years, and the government doesn’t want to lose income from a crucial industry. In 2019, Turkey made nearly $35bn from tourism.

While Turks have been isolating at home, their government has allowed tourists who are visiting the country short-term to be exempt from the new lockdown measures, triggering widespread outrage.

"Enjoy -- I'm vaccinated!"
Feels almost like a colonial mindset to have this tourism ad campaign for Turkey as locals are on lockdown and less than 13% of country is vaccinated https://t.co/l0r1XcP4I2

Can Okar, a social media commentator, summed up a widespread feeling over the controversial video on Twitter.

“The vast majority of Turks aren’t vaccinated because of supply issues,” Okar tweeted. “Turkey doesn’t ask for PCR tests from many countries, let alone vaccinations. It places the health and welfare of tourists above the locals. It dehumanises and instrumentalises workers.”

On Friday, the Turkish health ministry's website indicated that only 14% of Turks have received their first dose of a vaccine so far.

Opposition leaders were quick to condemn the video, saying that the ad made it seem as if the Turkish government doesn’t value its citizens. “They left the citizens without vaccines. They bankrupted all sectors including tourism,” Ali Babacan, a Liberal Democrat opposition leader said in a tweet.

The tourism ministry later removed the ad from its official account, but the video has still been circulating online.

Russia and the UK -  two countries crucial to Turkey's tourism sector - halted direct flights due to concerns over soaring Covid-19 cases. While Russia's decision was seen as politically motivated, the UK acted following news reports that people from red list countries, such as India and Pakistan, had been staying in Turkey en route to Britain to circumvent quarantine rules in the UK.