Covid-19: WHO warns lockdowns not enough as MENA cases rocket Women, mask-clad due to the COVID-19 coronavirus pandemic, walk along a street in Iran's capital Tehran (AFP)
By
MEE and agencies

Iran, Jordan and Morocco have recorded thousands of new Covid-19 infections in recents days, with the World Health Organisation (WHO) warning that lockdowns will not be nough to stem the spread of the deadly disease.

A spokesperson for Iran's health ministry on Thursday said the death toll from the coronavirus outbreak had risen to 43,418, with 476 deaths in the past 24 hours. She added that the total number of infections had reached 815,117 in what has been the worst-hit Middle Eastern country.

Urging the nation to adhere to the health protocols to control the spread of the disease, health ministry spokeswoman Sima Sadat Lari told state TV that 13,223 new cases had been identified in the last 24 hours in the country.

WHO's regional director Ahmed Al-Mandhari said in a virtual press conference that more than 60 percent of all cases in the Middle East and North Africa in the past week "were reported from three countries - the Islamic Republic of Iran, Jordan and Morocco".

"Several other countries continue to see an increase in cases, including Lebanon and Pakistan. Countries that reported the largest increase in deaths included Jordan, Tunisia, and Lebanon." To date, the region the WHO recognises as 22 countries from Morocco to Pakistan has registered some 3.6 million cases, out of a global total of 55 million.

But Mandhari warned that official case numbers in the region likely fall far short of the reality.

"We believe the actual number of confirmed cases across the region to be even higher, and the recent trends remain highly concerning," he said.

He stressed the need for a comprehensive approach to managing the pandemic, with targeted lockdowns and strict adherence to personal preventive measures.

"The increases we are seeing now are clearly a result of the easing of lockdown and restrictions, which succeeded in controlling the pandemic in our region in July and August," he said.

"But lockdowns can only limit transmission to a certain extent."

Morocco on Wednesday passed the grim milestone of 5,000 total deaths from Covid-19, with over 306,000 cases since March, and around 5,000 new cases announced every day.

Jordan, meanwhile, is recording around 8,000 cases per day, with over 163,000 since the start of the pandemic.

Tunisia, which has seen over 83,000 Covid-19 cases, is currently recording some 1,400 new infections and around 100 deaths per day, with November likely to see a record number of coronavirus deaths. Iran Nuclear
Iran will return to nuclear deal if US sanctions are lifted, Zarif says 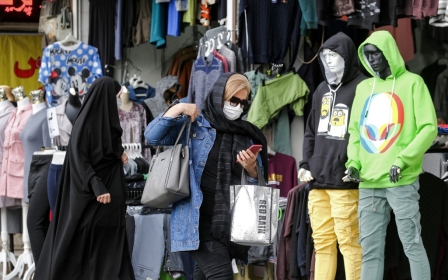