RAMALLAH - Palestinians packed into central Ramallah on Thursday, among thousands who demonstrated in the West Bank and East Jerusalem on Thursday to mark the 66th anniversary of the Nakba.

Nakba Day is remembered by Palestinians on 15 May as the catastrophe when nearly 800,000 people were displaced from their homes and some killed before and after the Israeli declaration of independence in 1948. It is remembered just over a week after Israeli Jews celebrate the anniversary of the establishment of the state of Israel.

Calm celebrations in Ramallah on Thursday stood in stark contrast to a protest near Ofer Prison where Israeli border police shot and killed two Palestinian youth. Demonstrators had been demanding the release of thousands of Palestinians held by Israel.

The Ramallah march began at the tomb of former Palestinian president Yasser Arafat and travelled down to Manara Square where 2,000 people from the town and nearby communities packed into the city centre.

During the march, many of the participants, including 16-year-old Asseel Rihan, stopped to tell the Middle East Eye in their own words what the Nakba means to them.

"Today is important," Rihan said, "because we are telling people that we do exactly remember what happened back then and we are not giving up our dreams and our rights."

A group of Palestinian youth wearing black T-shirts printed with 1948 and “return”, carried giant keys and held a large Palestinian flag as they marched through the square.

The giant keys symbolise the real-life keys that refugee families still hold to their original homes in Palestinian villages.

In the city centre, the atmosphere was calm as local Palestinian Authority security police controlled the crowds near Manara Square.

“We hope this year will bring the end of our suffering and the beginning of a new future for our nation,” Palestinian president Mahmoud Abbas said in a speech broadcast on Palestinian television. “It was time for the leaders of Israel to understand that there is no homeland for the Palestinians except Palestine and it is here we are staying.”

Israeli Prime Minister Benjamin Netanyahu slammed the commemorations saying, ”they stand at attention to mark the disaster of Israel’s creation”.

“They educate their children with endless propaganda, saying Israeli must be made to disappear,” Netanyahu said.

A freshly painted grey pick-up truck arrived in the square carrying men, women and children painted grey, and wearing black, white and grey - like ghosts from the past, simulating the flight of refugees from their homelands.

The truck, piled high with old suitcases and with children peering over the back, stopped in the middle of the square as the actors stepped out among the gathered crowd, reminding them of their past.

Later, a 66-second siren sounded across Ramallah marked each of the years that have passed since 800,000 Palestinians fled or were driven out in 1948, according to UN figures.

Many of those who left ended up in the West Bank, Gaza, Jordan, Lebanon and Syria. Today, there are 1.5 million Palestinian refugees, mostly descendants of the original refugees in 1948, across 54 camps. 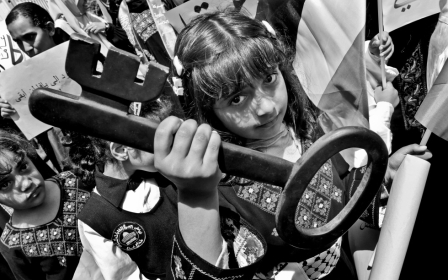 Nakba
Voices from Gaza: What does Nakba mean to you?