Dozens killed in air strikes and clashes in Yemen's Hodeidah 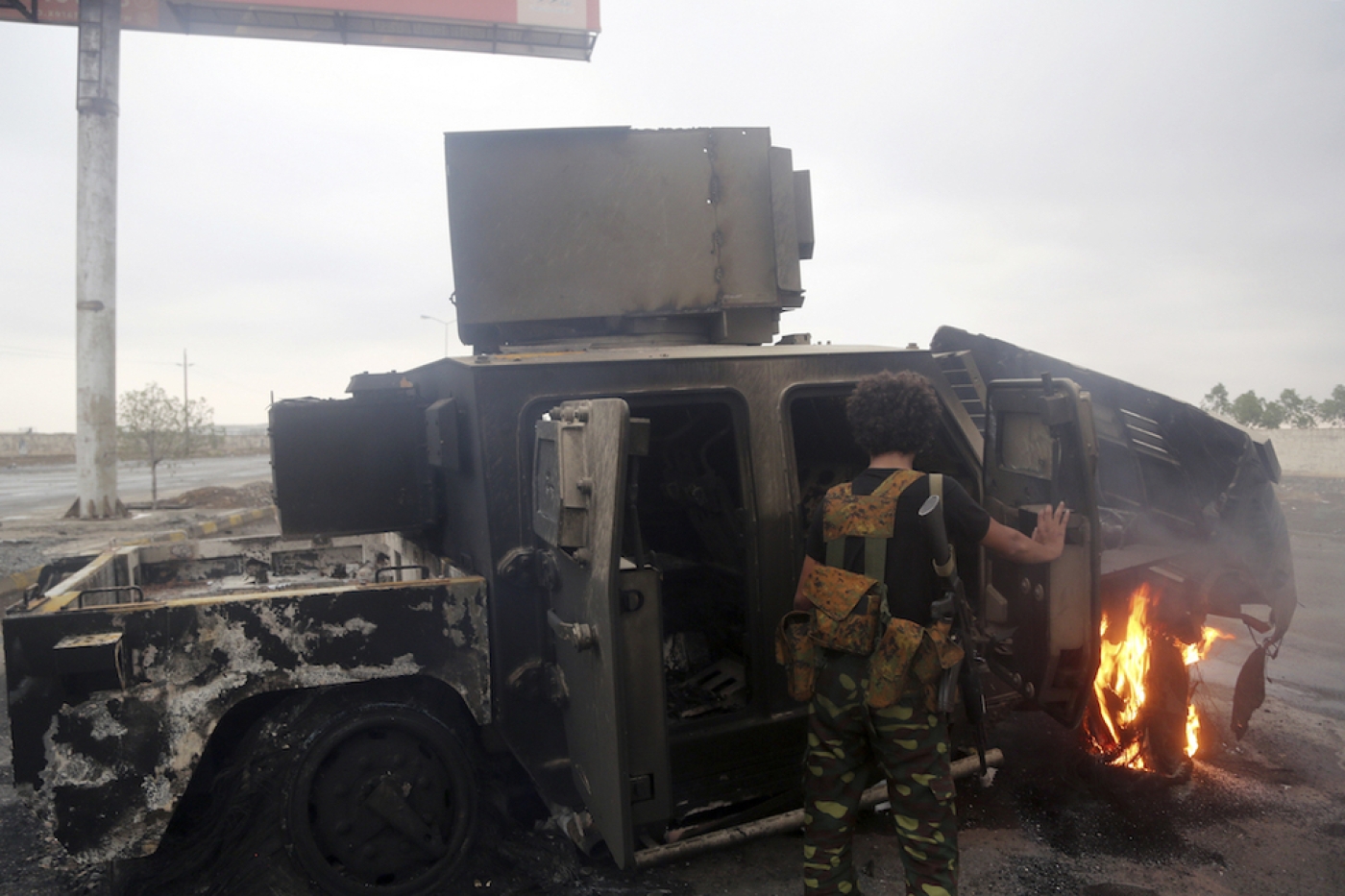 A Houthi rebel inspects a burnt out armoured vehicle on 13 September 2018, reportedly destroyed in an air strike (AFP)
By
MEE and agencies

Fresh clashes and air strikes have killed dozens of rebels around Yemen's Red Sea city of Hodeidah, hospital sources have said, as a UN envoy kept up peace efforts in Sanaa.

According to medical sources in Hodeidah province, which is controlled by the Houthis, a total of 32 fighters have been killed and 14 others wounded in fighting since Saturday.

A military source told the AFP news agency on Sunday that the Saudi-led coalition fighting alongside the Yemeni government against Houthi rebels had also carried out an air raid on a radio station tower in the port city.

The coalition accuses the Tehran-aligned Houthis of smuggling arms from Iran through Hodeidah and has imposed a partial blockade on the port, which the rebels seized in 2014.

In June, pro-government forces launched a major operation to retake both the city and its port, the entry point of most of the impoverished country's imports and aid.

The troops, backed by coalition air strikes, have retaken a number of towns across Hodeidah province but have not yet breached the city.

The coalition in July announced a temporary ceasefire in Hodeidah to give a chance to UN-brokered peace talks which failed to bring the two sides together and collapsed in Geneva earlier this month.

Martin Griffiths, the UN's Yemen envoy who is pushing for new peace talks, arrived on Sunday in the rebel-held capital Sanaa, without making any statement to the media.

The rebels kept away from the talks, accusing the UN of failing to guarantee the return of their delegation from Switzerland to Sanaa, and to secure the evacuation of wounded rebels to Oman.

On Saturday, the Houthis said they have signed a memorandum of understanding with the UN to airlift critically ill patients abroad for treatment.

The Houthi-run Saba news agency reported that the memorandum, signed by Foreign Minister Hisham Sharaf Abdullah and Lise Grande, the UN Humanitarian Coordinator in Yemen, would include transporting critically ill Yemenis abroad from Tuesday, 18 September, for a period of six months.

"The memorandum of understanding is the first step to alleviate the suffering of patients in need of treatment abroad," said Abdullah.

"The move does not in any way mean we are delaying our demand to reopen Sanaa International Airport for commercial and civil flights.

"The air bridge covers only a limited number of cases, but it is necessary in light of the continued siege and aggression."

Saudi Arabia and its allies intervened in 2015 in the conflict between embattled Yemeni President Abd Rabbuh Mansour Hadi, whose government is recognised by the UN, and the Houthis.

Nearly 10,000 people have since been killed and the country now stands on the brink of famine.