Dozens of people were killed and many more injured on Tuesday in Syrian government air strikes targeting two towns in rebel-held areas of the northern Idlib province, according to monitoring groups and local officials.

The UK-based Syrian Observatory for Human Rights said that the death toll from the two attacks, which struck a marketplace in Maarat al-Numan and the nearby town of Kafranbel, was 44.

It said the death toll was also expected to rise because some of those injured were in a critical condition. It said air strikes had been reported in Jisr al-Shugar also in Idlib province.

Omar Alwan, a civil defence official based in Maarat al-Numan, told Turkey's Anadolu news agency that the combined death toll was 33 people and that all had been civilians.

The attacks, some of the deadliest since a ceasefire took effect in February, were condemned by the leading Syrian opposition group who said late on Tuesday that as a result of the strikes, they were leaving Geneva where UN-led peace talks have been underway for the past week.

"It is a dangerous escalation of an already fragile situation, showing contempt for the whole international community at a time when is supposed to be a cessation of hostilities," the High Negotiations Committee (HNC) spokesman Salem al-Meslet said in a statement.

On Monday, the opposition announced it was halting its partipation in the talks to protest escalation violence and restrictions on humanitarian access in the country.

Muslet said Tuesday's raid was "Assad's response" to the HNC's decision to suspend its participation.

Alwan said 28 people had been killed and 33 people injured in the attack on the marketplace in Maarat al-Numan, and then five people left dead and 12 wounded in an attack by the same plane in Kafranbel.

"It was very busy," Fares said of the square on Tuesday before the strike.

Since the start of the war, the square has been the site where anti-government activists have gained widespread attention for raising banners and posters with messages to world leaders and the UN among others.

"Nobody knows who's turn it is [to be killed] anymore," Fares said.

As Fares talked to MEE, he said that military planes were still in the sky overhead.

Video of the aftermath of the attack in Maarat al-Numan was published on YouTube by the local Baladi News activist group showed scenes of lifeless bodies strewn on the streets, with debris everywhere.

The latest air strikes come after the Syrian government's chief negotiator said that Syrian President Bashar al-Assad's future was not up for discussion at peace talks currently taking place in Geneva.

"This matter (the presidency) does not fall under the jurisdiction of Geneva,” Bashar Ja’afari said. “This is a Syrian-Syrian affair, Security Council or no Security Council." 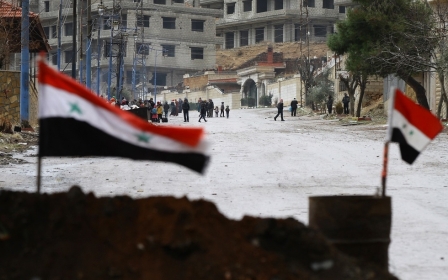 Syria War
A Syrian witness to war: 'Something inside me broke'