While some analyst question their efficacy, drones will 'continue to go after high-value targets inside of Yemen', Obama says A drone strike killed three suspected members of al-Qaeda in Yemen on Monday after Washington vowed to carry on its campaign against the militant group despite the country's ongoing political crisis.

The US embassy in Sanaa, meanwhile, announced on its website that it was closed to the public until further notice due to security concerns.

The drone strikes come a day after US President Barack Obama insisted that Washington would pursue its efforts against al-Qaeda in Yemen regardless of the upheaval that saw Western-backed President Abdrabuh Mansur Hadi tender his resignation last Thursday.

Monday's drone strike saw an unmanned aircraft, which only the US operates in the region, fire four missiles at a vehicle in a desert area east of Sanaa, killing three suspected Al-Qaeda militants, a tribal source told AFP.

For years, Yemeni authorities have allowed Washington to carry out strikes against al-Qaeda in the Arabian Peninsula (AQAP), the local branch of the network which claimed responsibility for this month's deadly attack on French satirical weekly Charlie Hebdo.

In India on Sunday, Obama vowed the US would "continue to go after high-value targets inside of Yemen".

“Our top priority is and always has been that our people on the ground are safe. It’s a dangerous country in a dangerous part of the world," he told reporters.

“But our second priority is to maintain our counter-terrorist pressure on al-Qaeda in Yemen and we’ve been doing that. Reports suggesting the counter-terrorist activity had been suspended. That’s not accurate.”

Khaled Fattah, a Yemen expert at the Carnegie Middle East Centre, agreed it was unlikely there would be a let-up in the drones.

"Washington will continue its campaign, regardless of who will be sitting on Yemen's presidential chair, and regardless of whether the chair is empty or filled," said Khaled Fattah, a Yemen expert at the Carnegie Middle East Centre.

Though the US has reasserted the need for a continued programme of drone strikes in Yemen, analysts have warned that its effectiveness was still in question.

"Of course, it's true that long-term stability provides the best anecdote to terrorism, but the reality is that in complicated, dangerous and difficult countries like Yemen, the US is not going to devote the resources to engage in nation-building and so first order national security issues necessarily take precedence," Juan Zarate, a Deputy National Security Advisor during the George W Bush administration and senior adviser at the Washington, D.C.-based Center for Strategic and International Studies, told CBS News last week.

Hadi resigned last week after the Houthis kidnapped his chief of staff and seized key buildings across the capital, including the presidential palace.

The unrest has raised fears of strategically important Yemen, which lies next to oil-rich Saudi Arabia and along key shipping routes, collapsing into a failed state.

The longer a power vacuum persists "the more dangerous the political limbo in Sanaa gets," Fattah said.

On Monday, as the US closed its embassy and urged US citizens to leave the country immediately, Houthis armed with daggers attacked protesters gathered inside the campus of Sanaa University to demonstrate against them, leaving 10 people wounded, activists said.

The Houthis had earlier blocked access to the university and the nearby Change Square with roadblocks in a bid to prevent demonstrations. 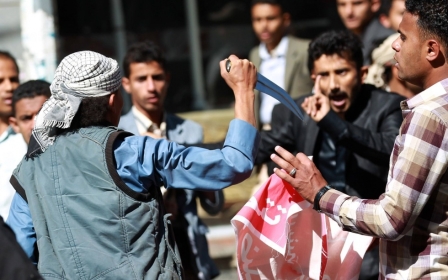 Inside Yemen
Thousands rally against Houthi militia control in Yemen