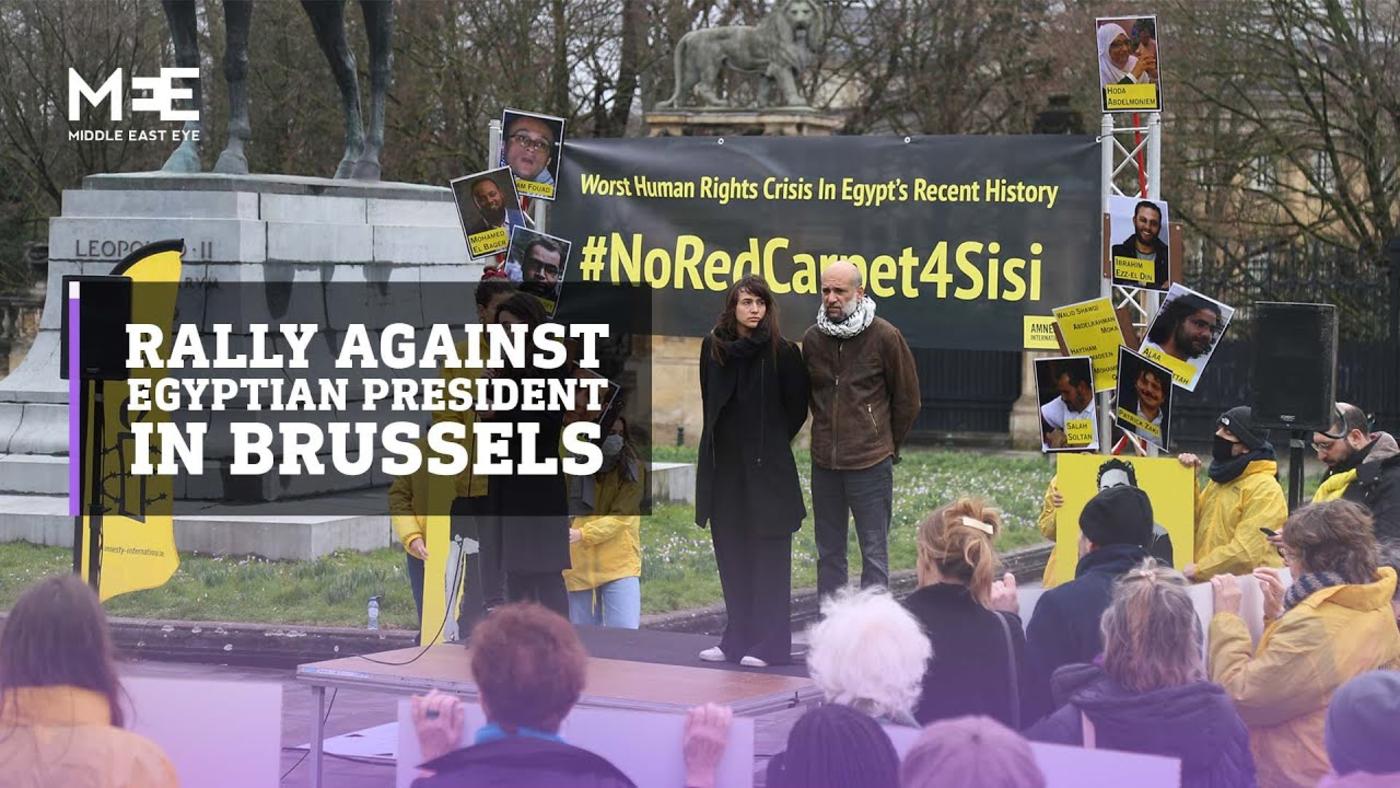 By
Ahmed Gamal Ziada
in
Brussels

Human rights advocates rallied in Brussels on Wednesday against Egyptian President Abdel Fattah el-Sisi, who arrived in the Belgian capital for a summit between the European Union and the African Union.

The protest was called by Amnesty International and was held outside the royal palace during Sisi's meeting with King Philippe.

Among the protesters was Ramy Shaath, the Egyptian-Palestinian political prisoner recently released in Cairo after 900 days in detention.

"I am here today to ask the leaders of the European Union to speak out about human rights violations in Egypt. I ask them to be clear and not to accept this," he told Middle East Eye at the protest, adding that the EU's economic and military ties with Cairo should be conditional on improving the human rights situation in the country.

EU and African leaders were meeting on Thursday for a two-day summit, seeking to reboot ties with pledges of major investment in the face of competition from China and Russia.

Like many political prisoners in Egypt with foreign passports, Shaath had his nationality stripped as a pre-condition for his release on 6 January. The measure that has been denounced by rights groups and human rights advocates, including Shaath's family.

"They are trying to convey their message to every Egyptian that they have to choose between being Egyptian or being free," Shaath told MEE.

Today at #NoRedCarpet4Sisi demonstration with #RamyShaath, free only thanks to relentless efforts and campaigns led by his wife @CelineLST

It must be intensified to secure the release of the thousands other political prisoners in #Egypt: https://t.co/SXcUuXNwPl pic.twitter.com/TUzpYxuLMf

Sisi's government has been accused of overseeing the worst human rights crisis in the country's modern history. According to Human Rights Watch, at least 60,000 political prisoners languish in jails, many of whom have been subjected to enforced disappearance and torture.

"Please, we want to see 60,000 political prisoners outside the prison, not one of them a criminal. This must end," said Shaath, protesting alongside his wife, Celine Lebrun, who led international efforts for his release.

Lebrun told MEE that she felt the suffering of families of political detainees in Egypt, and she was demonstrating on their behalf.

"I know exactly what it means to lose the person you love for years after losing my husband for two years."

Lebrun called on the EU to use its economic relations with the Sisi government to demand the release of Egyptian prisoners, and to improve the human rights situation in general.

"We are talking about journalists and human rights defenders who go to prison for no reason, and this should not be acceptable to the leaders of the European Union," she added.

'We want him free'

Eve Geddie, advocacy director at the European Institutions Office of Amnesty International, said President Sisi and his government were undertaking a brutal crackdown on rights and freedoms against their own people.

"In Egypt, people are being silenced, harassed and imprisoned for speaking out against the government, for criticising economic policy or asking for their fundamental human rights," Geddie said from the protest. "We're here today at the moment that Sisi is visiting Brussels to make it clear that the repression that he's undertaking at home must be addressed."

Protesters also included Souheila Yildiz, partner of the jailed Egyptian researcher Ahmed Samir Santawy, who was detained in February last year and sentenced to four years in prison. Speaking to MEE, Yildiz said she was protesting to ask Sisi to uphold the human rights conventions signed by his country.

"My partner Ahmed Samir has been in prison for one year now, and we want him free. I have been contacted by the lawmakers here in Belgium, and they all assured us that our King Philippe would address his release with Sisi. That is what we expect from him. We hope that will lead my partner to be here with us very soon," Yildiz said.

The protesters carried banners calling for the release of political prisoners, including Santawy, Salah Soltan and Alaa Abdel Fattah.

In January, the award-winning Arab Network for Human Rights Information announced its closure after 18 years of operation, due to its inability to continue its human rights work in Egypt's oppressive climate.

Sisi's trip comes soon after human rights campaigners reacted with alarm to reports that the EU was planning a joint bid with Egypt to chair an international counterterrorism body, citing widespread abuses and the crackdown on opposition activists and politicians in the country.

HRW denounced the joint bid, warning that Sisi had, since coming to power in a 2013 coup, routinely imprisoned, tortured and executed activists and opposition politicians in the country while groundlessly branding their activities "terrorism". 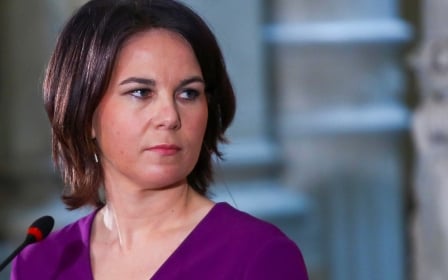