Decision has been made to reciprocate Qatar's ban of visitors from Egypt, the government said The government of president Abdel Fattah el Sisi (R) has not been on good terms with Doha for years over the latter's support for late president Mohamed Morsi, ousted by Sisi in 2013 (AFP/file photo)
By
MEE staff

Egypt on Wednesday decided to bar the entry of Qatari nationals over coronavirus fears, a spokesman of the government said.

The decision, to take effect on Friday, includes those who have a valid residency in Egypt.

Qatar had imposed a temporary entry ban on visitors from Egypt over fears of the novel coronavirus, also known as COVID-19, after nine patients returning from Egypt to Canada, France and the US were diagnosed with the virus.

The Egyptian government, however, said no cases linked to Qatari tourists have been detected inside the country. 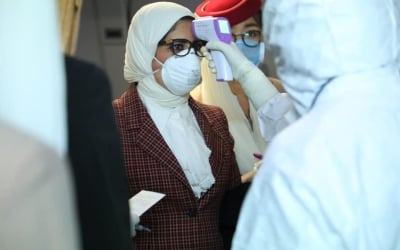 Cabinet spokesperson Nader Saad told local reporters on Wednesday that his government’s decision was made “in accordance with the principle of reciprocity”, without elaborating why Qatari citizens in particular could pose a threat related to the virus.

Egypt has so far reported only two coronavirus cases, one of them a Chinese national who fully recovered, according to the health ministry.

The second case, reported on Monday, is also a foreign visitor. The government did not clarify who the foreign visitor was or how they were infected.

The government has been criticised for a lack of transparency regarding at least nine cases of people who had travelled from Egypt and have been diagnosed in Canada, France, and the United States.

But Prime Minister Mostafa Madbouly said on Wednesday that his government “will not hide anything” and is following the guidelines of the World Health Organisation to combat the epidemic.

Coronavirus has spread across the Middle East and North Africa, with new cases declared every day. Morocco reported its first case on Tuesday, while Saudi Arabia declared its first on Monday.

The Egyptian government has downplayed the threat of an imminent outbreak in Egypt, but said it is “fully prepared” for the worst scenarios.

“Worldwide indicators are showing the virus is decreasing, and we are not worried about its spread in Egypt,” Nader Saad told a TV talk show earlier this week.

Qatar has reported eight cases of coronavirus since 29 February, when a 36-year-old Qatari man tested positive for the virus after returning from Iran.

Egyptian-Qatari relations have worsened after President Abdel Fattah el-Sisi came to power in 2014. Qatar had supported Sisi’s predecessor Mohamed Morsi, who was ousted by Sisi in 2013 in a military coup. Coronavirus
Coronavirus in the Middle East and North Africa: What do we know so far?