Egypt: Gamal and Alaa Mubarak pictured in UAE after years of travel ban 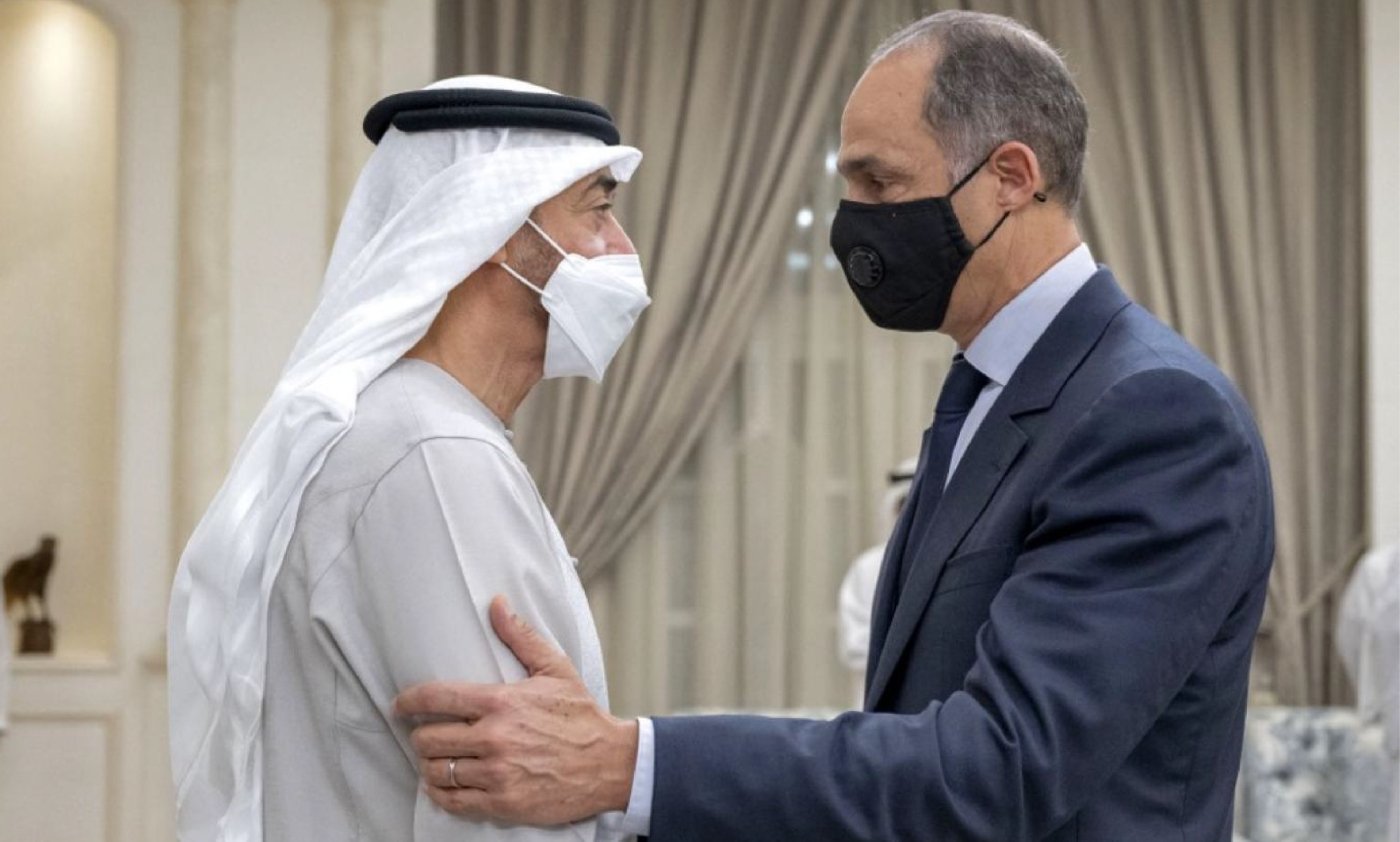 Gamal Mubarak (R) offering condolences to Mohamed bin Zayed al-Nahyan, president of the UAE, at the Mishrif Palace in Abu Dhabi on 16 May 2022 (AFP)
By
MEE staff

The sons of Egypt’s former president Hosni Mubarak were pictured in Abu Dhabi on Monday in a first foreign trip since the 2011 revolution that toppled their father.

'The facts have now been established, and the false allegations have been unequivocally rebutted'

The photos raised questions over how Mubarak was able to leave Egypt despite a longstanding travel ban against members of the family.

On Tuesday, the 58-year-old released a video statement declaring that his family has been cleared of corruption charges brought against them internationally in the wake of the 2011 pro-democracy uprising.

The video comes after Swiss federal prosecutors dropped an 11-year investigation into suspected money laundering by Egyptians close to Hosni Mubarak during the revolution, freeing up millions of dollars for the late strongman's family.

The Swiss judgement followed a decision by the European Union’s top court on 6 April to uphold a ruling deeming EU sanctions against Mubarak and his family unlawful and ordering the EU to pay legal costs incurred by the Mubaraks.

“The facts have now been established, and the false allegations have been unequivocally rebutted. The historical record has thus been independently and judicially corrected,” Gamal Mubarak said in the English-language statement published on YouTube.

According to Transparency International, it is estimated that as president, Hosni Mubarak "stole nearly $70bn in public funds that are now concealed in France, Germany and Spain." The international anti-corruption group said the EU court's decision "signals impunity for corrupt actors."

In his statement, Gamal Mubarak denounced the "consistent international media campaign of false allegations of corruption that was unleashed against my family almost ten years ago." He also criticised Egyptian authorities for pursuing international courts to retrieve the alleged stolen funds.

"We were fully committed to vindicating our position solely before the Egyptian judiciary," he said.

"However, our hand was forced by the Egyptian authorities, who made a deliberate decision to pursue US and international jurisdictions. Such relentless pursuit was based on the false and outrageous pretext of funds allegedly pillaged or syphoned by my family overseas."

It is unclear whether Gamal and Alaa Mubarak are currently in Egypt or abroad.

Hosni Mubarak was deposed in 2011 after the Egyptian revolution, when hundreds of thousands staged nationwide protests for 18 days demanding an end to his authoritarian 30-year rule.

In the aftermath of his ousting, the president, his two sons Alaa and Gamal, as well as senior members of his government, were charged with various crimes related to corruption and suppression of protests. Their assets in Switzerland were frozen immediately after Mubarak stepped down.

However, in the years after the military coup that ousted Egypt's first democratically-elected president Mohamed Morsi, the Mubaraks were acquitted by Egyptian courts of most charges between 2015 and 2020. Their acquittals were a blow to proponents of 2011 revolution, who called for Mubarak's government be held accountable for alleged corruption and the crackdown on human rights during his rule.

Recovering the government's "stolen billions" was one of the main demands of the protest movement.

Egypt’s top appeals court in March 2017 also acquitted Mubarak of charges of killing protesters in the 2011 revolution, when at least 840 people were killed and 6,000 injured by security force who violently dispersed protesters.

Mubarak’s interior minister Habib el-Adly and four of his aides were acquitted of the same charges.

The Cairo Criminal Court also acquitted Alaa and Gamal Mubarak of charges of illegally obtaining, along with others, more than 2bn Egyptian pounds (about $140m), in the case known in the media as the “manipulation of the stock exchange”.

In May 2015, the brothers and their father were convicted of embezzlement of state funds earmarked for renovating presidential palaces, and using them for their private homes. They served their three-year prison sentences in connection with these charges.

Amnesty International said Mubarak left a legacy of “mass torture and arbitrary detention”, along with the impunity of security forces for human rights violations that remain deeply entrenched in Egypt. Corruption
From King Abdullah to Mubarak's sons, here are the Middle Eastern figures in the Credit Suisse leaks