A prominent Egyptian journalist known for being openly critical of the country’s security practices has been stabbed four times in what relatives say was an assassination attempt.

Ahmed Gamal Zyada was walking at a metro station in Giza late on Friday night when he was attacked by two men, one of whom stabbed him four times, according to an account published by his brother Mohammed on Facebook.

Zyada was stabbed in the back, chest, hand and leg, and has undergone surgery at a local hospital.

Relatives and friends say they consider the attack an assassination attempt rather than a robbery, as his money and mobile phone were not taken.

Zyada spent more than 500 days in prison after he was arrested in December 2013 while taking photographs of clashes at Cairo’s famed al-Azhar University.

Interviewed by Middle East Eye after his release, Zyada said he had been regularly tortured during his imprisonment and was disciplined harshly for smuggling out letters describing conditions in the prison where he was held.

He described the difficulties of life after his release, and said that despite feelings of fear he would continue to write.

“I am not going to stop exposing what is going on here in Egypt … a country ruled by the army and by fear.”

Zyada’s brother Mohammed wrote on Facebook on Sunday that his brother had been sent a letter from the security forces while in prison warning that his writing would lead him to a “bad position”.

In recent articles, Zyada had detailed allegations of torture in Egyptian prisons and criticised the country’s powerful Interior Ministry. Arab Spring
Ahmed Gamal Zyada: 'I'm afraid, but I am not going to be silent' 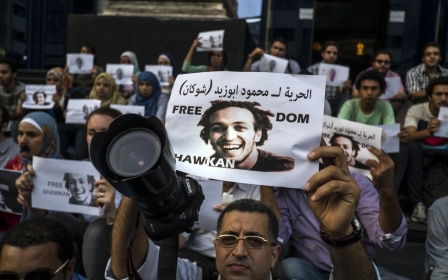