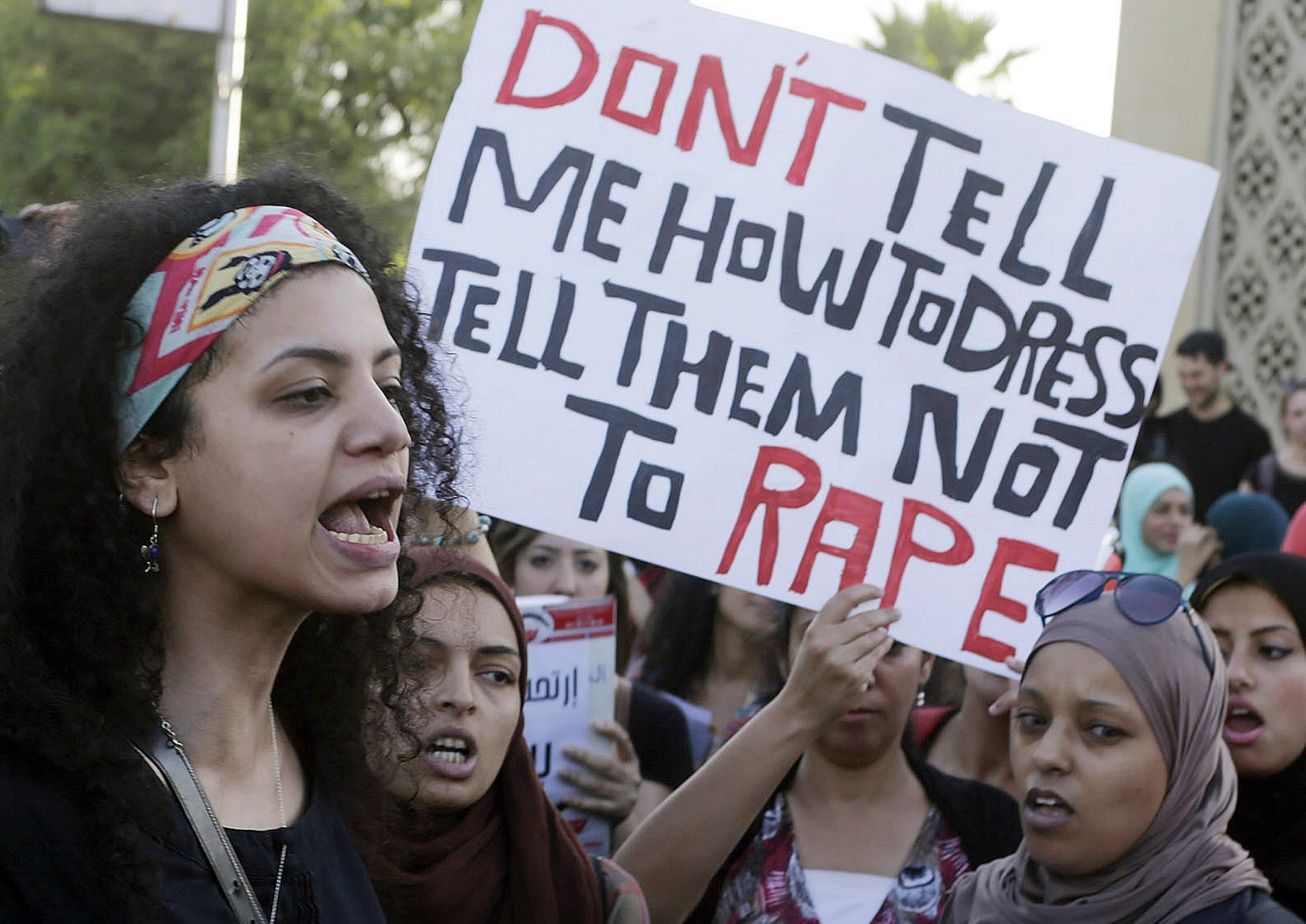 Women protest against sexual violence in 2014, following the gang rape of an 18-year-old woman at a luxury Cairo hotel (Reuters)
By
Nadda Osman

Egypt’s public prosecution office has ordered the arrest of a group of individuals accused of raping a young woman at a luxury Cairo hotel in 2014, a case that ignited a movement against sexual violence across the country.

In a statement published on Monday, the public prosecution office said that the accused individuals would also be placed on travel ban lists and monitored until the investigation was complete, and both the alleged victim and witnesses were to be questioned further.

The arrests follow an announcement earlier this month from the public prosecution office that it would open an investigation into the alleged gang rape of an 18-year-old woman at the Fairmont Nile City Hotel six years ago, following a social media campaign that applied pressure on authorities.

The accusations on social media emerged in July and were levelled at a number of wealthy young men, who allegedly drugged and raped the woman and then used video of the incident to blackmail her into silence.

The hashtag #FairmontIncident was widely used on social media to share details about the alleged incident and draw attention to it, pressuring authorities to take action against those accused.

The arrest of the alleged perpetrators has largely been seen as a win for Egypt’s "MeToo" movement, which has gained prominence on social media.

A popular Instagram account called "Assault Police" was key in sharing details about the alleged rape. However, it was forced to close down abruptly after its administrators received death threats for asking people to come forward about the incident.

In a huge win for #Metoo advocates, #Egypt’s public prosecutor has ordered the arrest of a group of men, hailing from wealthy families, & placing them on a no-fly list for their gang rape of a young woman in a Cairo luxury hotel in 2014 #fairmontincident #جريمة_الفيرمونت pic.twitter.com/E72v7kPim0

The account, which has over 180,000 followers, has since returned and is asking followers to protect the victim by not sharing her name, following threats of publicly shaming the victim online.

The Assault Police account also played a critical role in revealing information about Ahmad Basam Zaki, a 22-year-old Egyptian man who had been accused by around 100 women of a range of sexual crimes, including blackmail, rape and online sexual harassment.

Following Zaki's case, Egypt’s Ministry of Justice submitted a bill to parliament proposing amendments that would include further protections for survivors of sexual harassment.

The law, which was approved by parliament on 16 August, will give survivors of sexual assaults the automatic right to anonymity, aiming to make it safer for them to seek justice and to name the alleged perpetrators of those crimes without fear of retaliation.

Parliamentarian Ghada Ghareeb said she saw the law as a step "in a long road of issuing regulations that preserve women's rights".