Founders of the Saudi Al-Sharq News channel pose for a picture on the launch day on 11 November, 2020 in Riyadh (LinkedIn/@Al-Sharq News)
By
MEE correspondent

The owner of Egypt’s largest opposition channel has filed a lawsuit in London against a new Saudi-US joint venture that he alleges stole his brand.

Ayman Nour, the owner of the Istanbul-based Al-Sharq Company, has hired the British law firm Arden Solicitors Advocates to file a copyright infringement lawsuit against the Saudi Research and Marketing Group (SRMG) and Bloomberg Corporation, accusing the two of launching a new channel with the same name and almost identical logo as his channel.

The Saudi channel was launched on Wednesday from studios in Dubai and Riyadh.

'This bullying aims to crowd out our Al-Sharq channel in social media and other platforms in a despicable intelligence operation,'

The channel is run by Nabil al-Khatib, the Palestinian former director of Al-Arabiya channel, and includes among its staff a large number of Arab media professionals.

In its founding statement, the channel said that it will focus on regional and international economic issues "so that the Arab public can be aware of the latest developments in the global economy as they occur, with full and in-depth analyses that keep pace with developments."

Khatib, the channel’s general manager, said in an in-house interview on Wednesday: "Al-Sharq is a television station accompanied by many platforms to address many groups that have never had a news service appropriate to their interests, and this institution will provide a unique service to business leaders, opinion leaders and policy leaders keen on the economies of their countries."

Prior to its launch, the channel sparked widespread controversy due to the resemblance of its name and logo with the Egyptian channel run by Nour.

Middle East Eye has contacted SRMG for comment on Nour's claims and the lawsuit, but had not received a response by the time of publication. Bloomberg declined to comment.

Nour is a liberal Egyptian opposition leader living in exile in Istanbul. His channel Al-Sharq has been one of the main platforms for politicians opposed to Egypt's President Abdel Fattah el-Sisi, who came to power after ousting his democratically elected predecessor Mohamed Morsi in a 2013 military coup.

According to Nour, the new channel is partly owned by individuals close to Saudi Crown Prince Mohammed bin Salman. Saudi Arabia and the United Arab Emirates have been Sisi's main backers in the region since 2013.

SRMG, which has headquarters in Riyadh and London, is also behind a number of major pro-Saudi government publications, such as the Arab News and Asharq Al-Awsat newspapers.

In September 2015, Nour founded the Turkish company Insan Medya, which runs Al-Sharq channel, and its studios are located in Istanbul.

In February 2019, he launched the British Al-Sharq Company, incorporated under the name of Al-Sharq Productions Co. Limited in London, with the company number 11850428. He then registered Al-Sharq Channel as an international trademark in Turkey, with the number 2019/127498.

In the letter sent to the law firm and shared with Middle East Eye, Nour says that a new channel with the name Al-Sharq is planning a talk show with the same name as the flagship talk show of the original Al-Sharq channel, With Moataz, whose host is Moataz Matar. The new show will be hosted by Moataz al-Demerdash.

Matar is one of the most outspoken critics of Sisi, while Demerdash is known for his pro-government positions.

Nour said when reports emerged in April 2020 about the joint venture between SRMG and Bloomberg to launch an Arabic-language channel with the same name as his channel, he sent a warning to Mike Bloomberg, billionaire owner of Bloomberg Corporation, threatening to take legal action against the new venture.

Though subsequently it was reported the company's name was changed to Bloomberg Al-Sharq and Al-Sharq Bloomberg News, last month the news broke that it would be launched on 11 November as Al-Sharq.

In the letter, Nour instructs Arden Solicitors to take legal action to stop the launch of the channel, explaining that it constitutes a “robbery” that “causes severe confusion to the viewers and advertisers of Al-Sharq TV” and would have “a dangerous impact” on the original channel’s revenues from YouTube and other platforms. "They want to distract our viewers, because we are the most famous opposition channel," he said.

"This is what you would expect from a channel based in Dubai and partly owned by Mohamed bin Salman," he added.

In a video shared with his social media followers, Nour said the Saudi project began more than five years ago with the support of Prince Al-Waleed bin Talal, under the name “Bloomberg Al-Sharq Al-Awsat or Middle East.”

“This bullying aims to crowd out our Al-Sharq channel in social media and other platforms in a despicable intelligence operation," Nour said.

"We will not stop our role and our message... We have all legal and intellectual property rights, and we will knock all possible doors," referring to the filing of lawsuits against the new channel.

Nour called on his supporters to take part in a social media campaign with the hashtag "The fake Al-Sharq" to raise awareness about the alleged piracy of his brand. 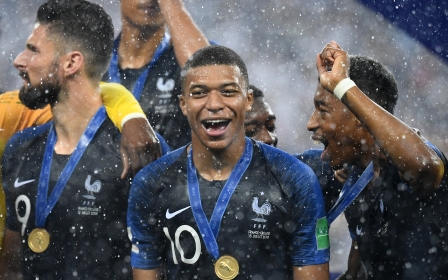