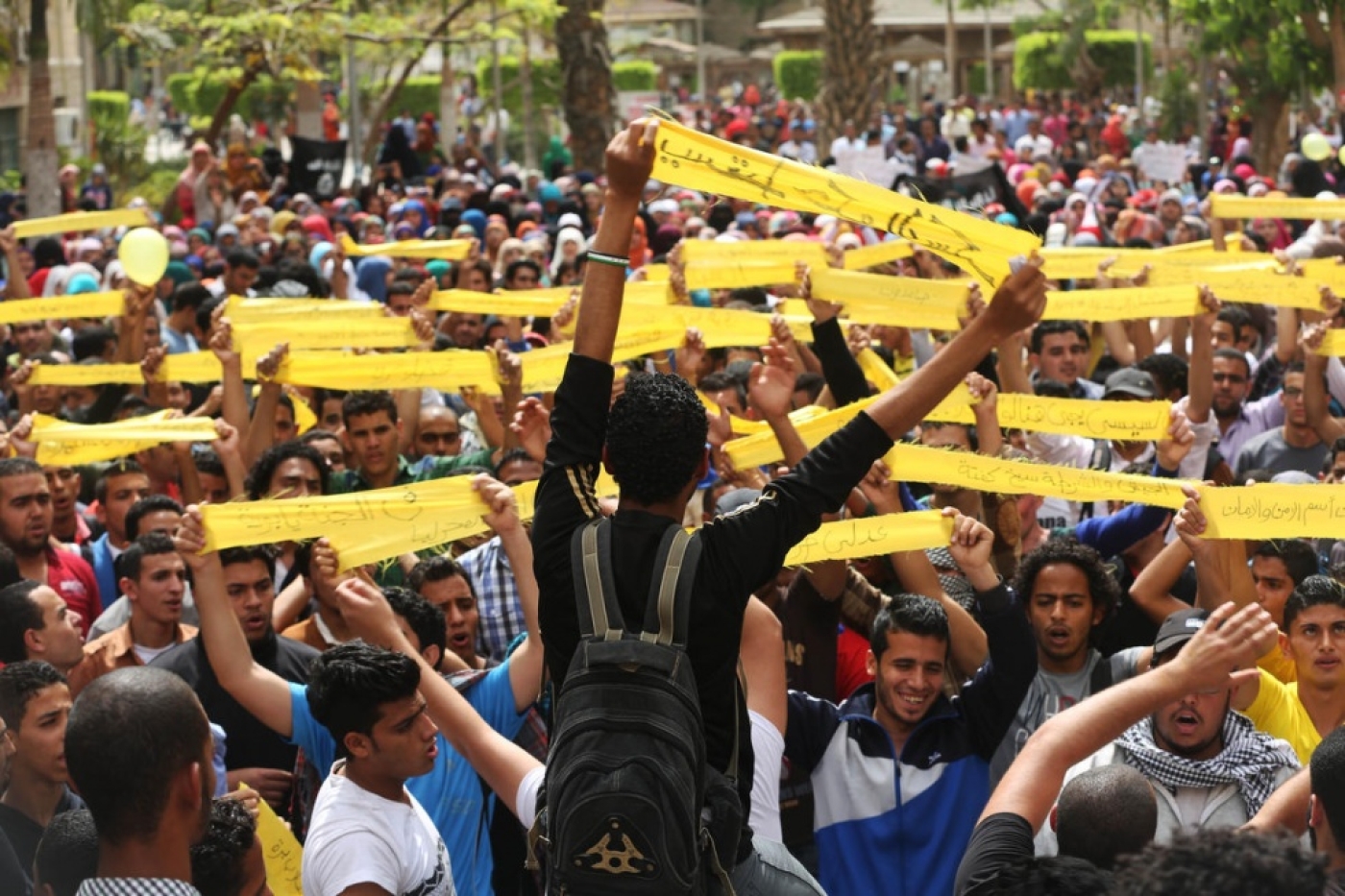 A group of students stage an anti-coup protest in Cairo University - April 23, 2014 (AA)
By
MEE and agencies

Clashes erupted Thursday between policemen and villagers angered by the arrest of ten people during a raid on their central Egypt village, eyewitnesses said.

At least 40 villagers from the Beni Sueif province village of Al-Maymon were injured in the clashes, the witnesses added.

"The clashes erupted when scores of village residents went out to protest the arrest of their neighbors," an eyewitnesses told Anadolu Agency.

The eyewitnesses said that policemen fired teargas and birdshot to disperse the protesters who responded by pelting the policemen with stones.

The eyewitnesses said most of the 40 victims suffered temporary asphyxiation due to teargas inhalation.

No Interior Ministry officials were immediately available for comment.

Al-Maymon villagers blocked a main road connecting the Egyptian capital Cairo with Beni Sueif earlier in the day in protest against the arrest of 10 of local residents, whom the authorities accuse of belonging to the Muslim Brotherhood.

Egyptian authorities have unleashed a massive crackdown on the Brotherhood since the ouster of elected president Mohamed Morsi – a Brotherhood leader himself – by the military last July.

Since then, Egypt's military-backed authorities have rounded up hundreds of the Brotherhood's senior and mid-ranking members, hundreds of whom remain in detention.

In December, the Egyptian government branded the Brotherhood as a "terrorist" organization.

Meanwhile, the Egyptian Interior Ministry has dismissed reports on social media that a prison inmate had been tortured to death.

In a statement, the ministry denied reports alleging that Hani al-Daidamoni – an inmate of Egypt's Zagazig prison – had been tortured to death.

"The prisoner is enjoying good health in jail," the ministry asserted.

In February, 16 local NGOs called for an independent investigation into what it described as "increasing allegations" of systematic torture and sexual abuse in Egyptian prisons.

In a joint statement, the NGOs called for thousands of prisoners at Egyptian police stations to undergo medical examinations and for an independent delegation to be dispatched to meet prison inmates.

Signatories of the statement included the Egyptian Initiative for Personal Rights, the Nadim Center for the Management and Rehabilitation of Victims of Violence, and the Cairo Center for Human Rights Studies.

Earlier this month, the Egyptian Observatory for Rights and Freedoms said it had documented more than 270 cases of torture – and three cases of rape – against detained supporters of ousted president Mohamed Morsi in the month of March alone.

The rights group expressed concern over what it described as the maltreatment of detainees, particularly students, by Egypt's military-backed authorities.

The authorities have carried out a massive crackdown on supporters of Morsi and his embattled Muslim Brotherhood since the democratically elected leader's ouster by the military last July.

In the almost ten months since, thousands of the groups' members and sympathizers have been rounded up.

The Interior Ministry, for its part, has repeatedly denied allegations that prisoners were being subject to maltreatment or torture inside the country's police stations.