Following a low turnout at polling stations on Monday 26 May, Egyptian state and independent media prompted Egyptians to partake in the elections by warning them of a "doomed"’ destiny if they did not, while Egyptian Prime Minister Ibrahim Mahlab declared Tuesday a national holiday for government workers to encourage participation in the polls.

Furthermore, a state official said that Egyptians who do not cast their vote will be referred to the general prosecutor, while Egyptian satellite channels reported that sources in the electoral monitoring committee said boycotters would be fined 500 LE.

In the video - a combination of clips from Egyptian media outlets - Egyptian TV anchors including Al-Balad's Ahmed Moussa, CBC's Lamis El-Hadidy and famous actress Elham Shaheen tell Egyptians it is their national duty to cast their votes.

Egyptian media figure Tawfiq Okasha tells an Egyptian broadcaster, "Your [Egyptian's] future will be blacker than the blackness of a shoe...", while criticising those who did not cast their votes.

Mustafa Bakri, member of parliament and managing director and editor of Al-Osboa journal said, "If everyone continues like this... saying I'll boycott ... it's none of my business, Libya and Syria are there for us as examples. To those who do not partake in the elections, you are giving life to the terrorists and giving a justification for the US and the west to intervene."

Egyptian observers at polling stations claimed that the "hot weather" could be to blame for the weak numbers.

At the same time, there have been allegations of forgery at the ballot boxes, while the European Union, which has deployed 150 observers across Egypt, issued a statement saying it will reveal its findings two days after the election so as to remain impartial.

Head of the EU mission, European parliament member Mario David, said on Monday that, the mission "does not legitimise an electoral process nor does it validate any election results".

Furthermore, an official in the Egyptian naval forces called on members of the government designated "terrorist" Muslim Brotherhood to vote as fellow Egyptian nationals.

Meanwhile, three members of the Brotherhood were arrested for taking photos of empty polling stations in order to allegedly send them to Al-Jazeera.

Despite these reports, Adel Labib, the minister of local development and management, said on Monday that he expects the voting process to be extended to a third day, due to what he described as a high turnout expected to be not less than 26 million, Al-Ahram Arabic reported.

Turnout in the second round of 2012’s presidential election in the row between Morsi and Shafiq, was 26.5 million nationwide, out of 51 million registered voters.

According to a recent Pew Research Centre report, a slight majority (54 percent) will vote for Sisi, who, despite the low turnout, is still expected to win. The number of voter turnouts will however be a significant indication of the legitimacy of the Egyptian election results.

Election results are expected on 5 June 2014. 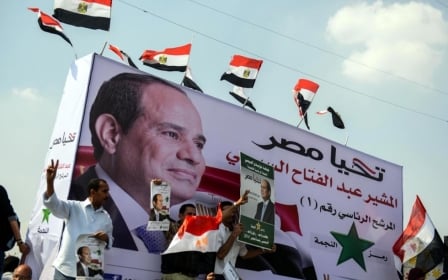 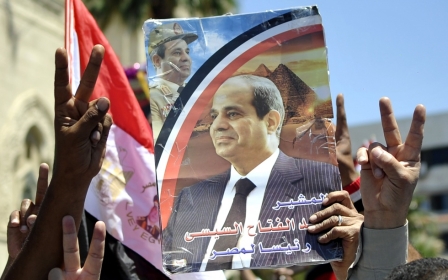