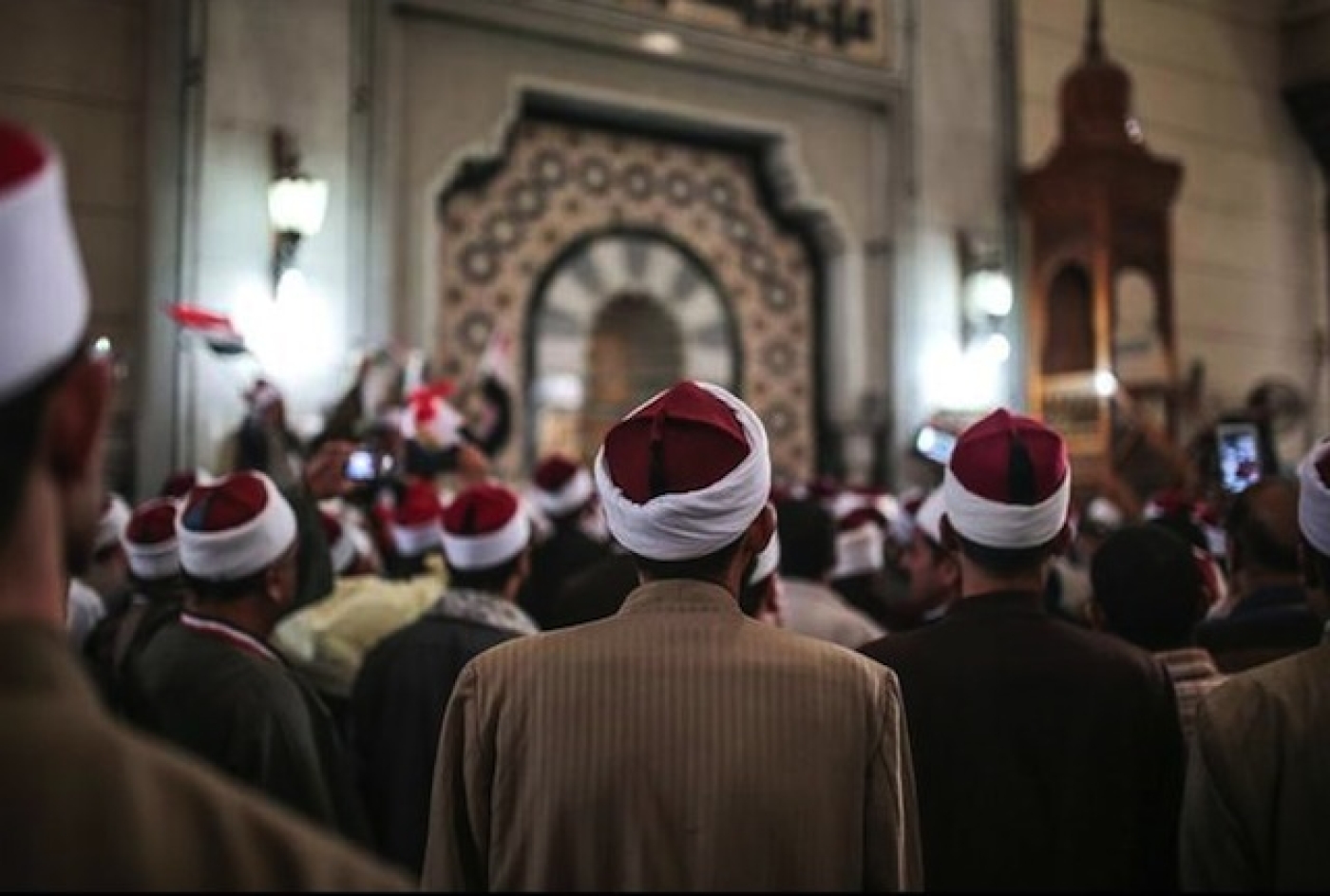 Egyptian scholars at a mosque in Cairo, Egypt (AFP)
By
MEE staff

In a tug of war within Egyptian establishments regarding the role and practise of religion, Egyptian minister of culture dismissed several top ministry officials in what has been seen by several intellectuals as move to oppose the secularisation of the state.

Minister of culture Abdel-Wahed El-Nabawy sacked the head of Egypt's National Book Organization, Ahmed Megahed, on Monday 27 July as well as the Secretary General of the Supreme Council for Culture, Mohammed Afifi, and the head of the National Center for Translation, Anwar Moghith, last June, citing no reason for the decision, reported Egyptian newspaper Ahram Online.

While emphasizing his appreciation for the role played by those officials in his ministry, and despite the fact that most of those dismissed were appointed only a year ago, Nabawy justified his decision by saying that “the ministry needed fresh blood”, reported Ahram Online.

The dismissals stirred anger among Egyptian intellectuals and observers who described the minister's policies as “destructive”, adding that the minister "lacks any cultural vision" and a number of them called for Nabawy to be relieved of his post, reported Ahram Online.

Several intellectuals, including well-known film directors, poets and novelists met with Egyptian Prime Minister Ibrahim Mehleb to discuss their concerns over the Nabawy’s move. They expressed fears over what they perceived as the ‘religionisation’ of the country, and said the move was aimed to cut back on the ministry's secular nature, reported Ahram Online.

The also expressed concerns over of the country moving back to a time where members of Muslim Brotherhood were in ministerial positions during the reign of President Mohamed Morsi.

The group of intellectuals believe the wave of change in the ministry of culture stated with the dismissal of the former minister of culture, Gaber Asfour, who was removed from his position in a cabinet reshuffle last March.

The dismissal of Asfour was allegedly attributed to his strongly secular tone which reportedly upset Al-Azhar, the highest Sunni authority in the country, on a number of occasions, reported Ahram Online.

Asfour had said Egypt was in need of renewing religious discourse, a call reiterated by Egyptian president Abdel Fatah al-Sisi on several occasions.

In January, Sisi called for a “revolution” in the religious discourse as a means to challenging extremism during a speech at the commemoration the birth of the Prophet Mohamed, held by Egypt’s ministry of religious endowments.

He called on the ministry and Al-Azhar to do more to combat extremist ideology and promote a moderate understanding of Islam.

“This renewal [of religious discourse] must be conscious and preserve the values of true Islam, eliminating sectarian polarization and addressing extremism and militancy,” Sisi had said.

While some Egyptians have felt concerned about a wave of ‘religionisation’ and what some perceive as associated extremism, others have cited an attack on those adorning religious attire.

Several Egyptian women have said they are facing a difficult summer because of a ban on the veil or hijab – a head-covering for Muslim women – was becoming increasingly prevalent at restaurants and high-end resorts.

Many observers expressed their anger over social media condemn the apparent decision by some venues to deny veiled women entry onto their premises because of their attire.

Dina Sherbini, who owns a chalet at an upscale resort in Ain Sukhna, about 200 kilometres east of Cairo, told al-Arabiya News she was threatened by staff members if she swam wearing an covered swim suit.

At the same time, another veiled woman told al-Arabiya that some beaches permitted access to veiled women on the condition that they would not swim in the pool with their hijab.

Although hijab-free zones are not new in Egypt where some resorts and restaurants frequented by foreigners in coastal cities such as Sharm el Sheikh and Hurghada have been common, the recent developments reflect a wide expansion of the ban.

Head of Egypt’s state council for women, Mervat Tallawy who does not view such acts as discrimination said Egyptian law did not regulate issues and that each establishment preserves the right to impose its own dress code, reported Arabiya.

“An establishment that prevents hijab-wearing women is just like any other that would ban a man for not wearing a suit,” she said.