Egyptian teen drowns in the Nile after fleeing sexual harassment

A 19-year-old girl drowned in the River Nile in Cairo this week after reportedly attempting to flee from a man who was sexually harassing her, activists told MEE on Wednesday

According to a campaigning group called, ‘I Saw Harassment’, three eyewitnesses confirmed that the girl - who has not been publicly identified - encountered sexual harassment on Monday from a lone man who reportedly followed her for 30 minutes.

When the girl tried to get away, she accidently fell into the river and drowned, Fathi Farid, spokesperson for the group, told MEE.

‘I Saw Harassment’ is a non-profit initiative established in October 2012, and run by volunteers. The group documents and raises awareness about sexual harassment incidents in Egypt and runs civil security patrols during large public gatherings.

Egypt's Interior Ministry and the Forensic Medicine Authority (FMA) have confirmed Monday's death. According to a FMA spokesperson Hisham Abdelhamid the girl jumped off the bridge “because she was facing personal hardships”, according to Egyptian Daily News.

Farid denounced official statements on the death and called for an official Interior Ministry investigation to be published.

“We have verified accounts of three witnesses including a lawyer, a teenager and a university student who witnessed the incident. The girl didn’t jump off the bridge or try to commit suicide; she was trying to get away from her harasser,” Farid told MEE.

According to Farid this was not the first case of sexual harassment in Egypt resulting in a death.

“In 2012, the first woman died as a result of sexual harassment in Asyut when she was shot dead by her harasser after trying to stand up to him. Another incident happened in 2013, when a girl called Shaimaa al-Turabi in Gharbiya was run over by a guy harassing her,” Farid explained.

Human rights organisations have continuously called on the Egyptian government to act against violence and harassment of women, which has been on the rise over the past several years.

“The incident highlights how bad the situation of sexual harassment is in Egypt and that consequences can be fatal. It puts the Egyptian authorities in a position where they really need to ensure that the measures they are taking to prevent sexual harassment is kept as a national priority,” said Rothna Begum, women’s rights researcher on Middle East and North Africa at Human Rights Watch.

“Those kind of incidents deter women from standing up or defending themselves and shows the level of violence against women,” added Begum.

In April 2013, the UN issued a report saying that 99.3% of Egyptian women face sexual harassment, using a survey for women across seven Egyptian governorates.

Egypt’s interim cabinet amended the harassment law and included it in the country’s penal code in June. The new amendments escalated the penalties for any form of verbal or nonverbal sexual harassment or abuse in public or private areas, to at least six months imprisonment and a fine of between EGP 3,000 ($420) and EGP 5,000 ($700).

The amendments were triggered by mass sexual assaults at gatherings in the capital. Egyptian rights groups documented at least nine incidents of mob sexual assaults and harassment in Cairo’s Tahrir Square between 3 and 8 June this year during celebrations of President Sisi’s election and inauguration. A video uploaded on YouTube, showing a stripped woman being sexually assaulted by a group of men, went viral on social media, prompting the government’s response. 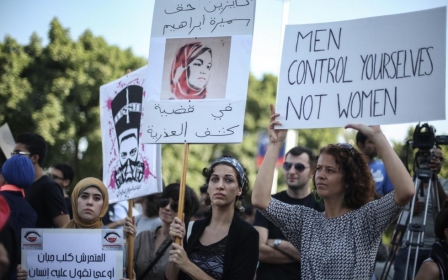