In his first address as Egypt's new president, Sisi says there will be 'no leniency and truce with those who resort to violence' Egypt's ex-army chief Abdel Fattah al-Sisi promised Sunday that his troubled country will be more stable under his new presidency.

"The time has come to build a more stable future," he said, before signing a power transfer with outgoing interim president Adly Mansour, whom Sisi had installed after toppling democratically elected president Mohamed Morsi.

In his first address as the country's new president, Sisi said there will be "no leniency and truce with those who resort to violence".

"I am looking to a new era built on reconciliation and tolerance.. except with those who committed crimes or used violence as a tool," he said.

Since Sisi ousted Morsi last July, interim authorities have crushed his Muslim Brotherhood movement, jailing its leaders and putting them on trial.

The now blacklisted Brotherhood had swept all elections since Mubarak's fall and up to the July 3 military coup that toppled Morsi.

In a speech to Arab royals, foreign dignitaries and Egyptian public figures at the presidential palace after the ceremony, Sisi said it was time "for our great people to obtain the fruits of their two revolutions".

Many Egyptians view Sisi as the leader best equipped to restore stability.

But Sisi's opponents fear that under his rule Egypt will return to an autocratic regime, worse than under Mubarak.

The Anti-Coup Alliance which supports Morsi said the military had been "wasting the money of the poor in festivities and celebrations".

Soldiers and police deployed in force around Cairo to head off protests by the battered Brotherhood and possible militant attacks. No violence was reported.

Hundreds of Sisi supporters celebrated by setting off fireworks at the capital's Tahrir Square, with its entrances controlled by army armoured cars.

Sisi took his oath at the Constitutional Court, next to the hospital where Mubarak, 86, is being detained after having been convicted of corruption.

Elite policemen stood guard outside the court as helicopters dropped posters of Sisi on well-wishers who turned up to see the former army commander.

Sisi's main challenges will be to restore stability and revive the economy after the turmoil that has followed the 2011 uprising and the July 3 coup.

Since Morsi's ouster, the crackdown on his supporters has killed more than 1,400 people and left thousands behind bars, while militant attacks left hundreds of policemen and soldiers dead.

In the run-up to the election, Sisi said that "national security" takes precedence over democratic freedoms.

Sisi became the fifth Egyptian president to rise from the ranks of the military, reasserting the army's grip on political life.

Sisi became Egypt's first field marshal president. In the history of the Egyptian military, only eight had been promoted to the rank of field marshal before Sisi.

None of them, however, made it to the office of the president.

Sisi served as military intelligence chief during the 2011 uprising against Mubarak.

Mubarak had been the highest ranking military officer to assume Egypt's presidency.

He was an army lieutenant general when named by then president Anwar al-Sadat as vice president in 1975.

Sisi was appointed by then president Morsi as defense minister in August 2012. He was also promoted to the rank of lieutenant general. 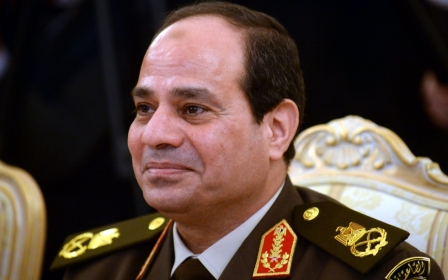 Egypt Vote
Egypt's Sisi is sworn in as President