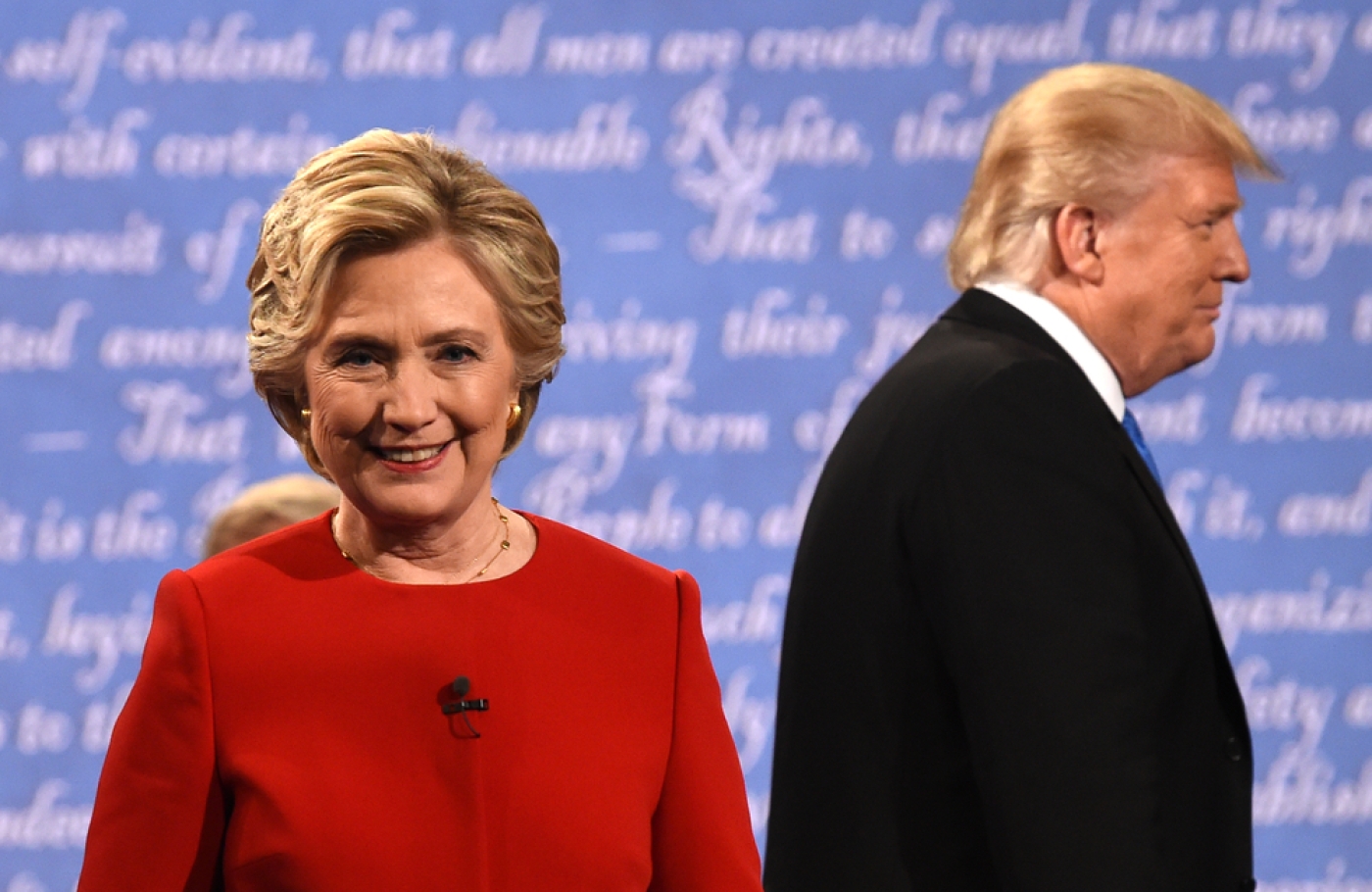 Hillary Clinton (L) and Donald Trump leave the stage after the first presidential debate at Hofstra University in Hempstead, New York on 26 September. (AFP)
By
MEE and agencies

Hillary Clinton and Donald Trump came out swinging in a crunch US presidential debate on Monday, with the Republican candidate accusing the former secretary of state of creating "a total mess" in the Middle East.

Clinton hit back at her rival as coming from a "very fortunate" background and called on voters to judge them both on the basis of "who can shoulder the immense, awesome responsibilities of the presidency".

Defending her record as President Obama's foreign policy chief in his first term, Clinton insisted the fight against IS is making progress.

"Our military is assisting in Iraq. And we're hoping within a year we'll be able to push them out of Iraq and really squeeze them in Syria. But we have to be cognisant of the fact that they've had foreign fighters coming to volunteer for them, foreign money, foreign weapons, so we have to make this the top priority," she added.

Both candidates traded barbs over contentious issues, including gun ownership, economic policies, and tackling the Islamic State (IS) group.

On economic policy, Trump said Clinton had decades where she failed to improve the lives of ordinary Americans.

"We have to renegotiate our trade deals and we have to stop these countries from stealing our companies and our jobs," Trump said.

Clinton hit back, accusing Trump's economic platform of amounting to "the most extreme" package of tax cuts for the wealthy in US history.

"I call it trumped up trickle-down, because that's exactly what it would be," she quipped.

This first 2016 presidential debate could be pivotal in deciding whether Clinton will become the first woman president, or if Trump can pull off the greatest upset in US political history.

While discussing crime and police-community relations, both candidates advocated banning people on the No Fly and terrorist watch lists from buying weapons.

Arab and Muslim advocates complain that those government lists unfairly target their communities.

A federal report leaked by The Intercept news website in 2014 claimed that Dearborn, a city with a large Arab American population, has the second highest concentration on a watchlist of “known of suspected terrorists”.

Activists say the report proves that the terrorist watchlist is based on racial profiling.

Trump accused his rival of leaving a trail of chaos in the Middle East during her tenure as secretary of state.

"You look at the Middle East, it's a total mess, under your direction, to a large extent," Trump said.

Trump's biggest handicap may be accusations that he has a weak grasp of policy - which he sought to counter by accusing his rival of causing mayhem in the Middle East.

But he appeared on shaky ground as he defended his refusal to reveal his plan for defeating the Islamic State group.

"You're telling the enemy everything you want to do. No wonder you've been fighting ISIS your entire adult life," he said of the group that only came to prominence in the last decade.

When debating what do with IS, Clinton said the US needs to work with tech companies to disrupt the militants' online activities.

"I think we need do much more with our tech companies to prevent ISIS and their operatives from being able to use the internet, to radicalise, even direct people in our country and Europe and elsewhere, but we also have to intensify our air strikes against ISIS and eventually support our Arab and Kurdish partners to be able to actually take out ISIS in Raqqa," she said, using a different acronym for IS.

Christina Elhaddad, a Lebanese American New York-based attorney, said she is not a fan of either candidates but prefers Clinton because she has adopted some of the progressive policies of her former Democratic opponent Bernie Sanders.

Elhaddad said she would not mind Trump's blunt approach if his ideas had substance.

"But he's just spewing hate and lies, and that's so problematic in a generation of people surrounded by so much information but too lazy to look anything up," she told MEE.

Elhaddad said Trump appears like he has no idea how to defeat the Islamic State.

"But I agree with him on one thing," she said. "The United States, under the presidencies of both Bush and Obama, was responsible for the creation of IS."

She said both presidents should have acted to end the violence in Iraq in its early stages.

Elhaddad added that brute force, which Trump seems to be proposing, cannot defeat the militants.

As the debate raged on, social media users ridiculed Trump for the way he described his beginnings.

Commenters on social media also blasted Lester Holt, the moderator, for his handling on the debate, often allowing candidates, especially Trump, to go off topic.

The candidates could not be more different – on domestic issues and on how the US should behave on the world stage and in particular, in the Middle East.

“Clinton’s disastrously hawkish positions in the region are a matter of record, helping to leave a trail of destruction in Iraq, Syria, Libya and Palestine, while once threatening to annihilate Iran,” Joe Lauria, an Erbil-based world affairs analyst, told Middle East Eye in May, shortly after it became clear the two candidates would face off for the presidency.

“Trump is a wildcard: he speaks non-intervention but has surrounded himself with interventionist advisers so no one really knows how he’d react to a crisis in the region. Neither inspires much hope at all.”

As Trump was asked about his tax returns, he said he is being audited by the IRS, diverting the focus towards Clinton’s use of a private email server when she was secretary of state.

He said he would release his tax returns when she released her 30,000 deleted emails.

Clinton hit back at Trump saying that he does not want to release his taxes because he is hiding something - his net worth, charitable giving or debts and business dealings overseas. She acknowledged making a mistake by using a private email server.