In the worst concerted period of pollution for three years, primary schools and nurseries were closed and new car exclusion zones imposed in the capital.

One area in northeastern Tehran peaked at 238.

This is the rise of the horrific pollution in Tehran for the past month that keeps schools sporadically closed. pic.twitter.com/ys4Y7vARX9

The official IRNA news agency reported that it was the 18th straight day of dangerously bad air while newspapers quoted officials casting blame on each other for the problem and failure to tackle it.

"Our preference was to close all schools but the education ministry insisted on keeping high schools open because of final term exams," said Mohammad Heydarzadeh, secretary of Tehran's emergency air pollution committee.

The cold weather is causing climate inversion - where emissions from car exhausts hang in the air rather than rising into the atmosphere above.

A decade-long central restriction zone based on car number plates was in place across the city on Wednesday, traffic police announced.

Vehicles with plates ending in an odd number are banned from roads on Saturday, Monday and Wednesday, while cars with even numbered plates are banned on Sunday, Tuesday and Thursday.

Sand and cement factories around the capital are banned from operating until Friday, the end of the Iranian week, Heydarzadeh said.

All outdoor sport activities are banned, he added, including professional football league matches.

It either rains right now or we all die! #tehran #air #pollution pic.twitter.com/8X1TyvHoL2

Exhaust fumes from the five million cars and almost as many motorcycles that ply Tehran's roads account for 80 percent of its pollution, officials say. 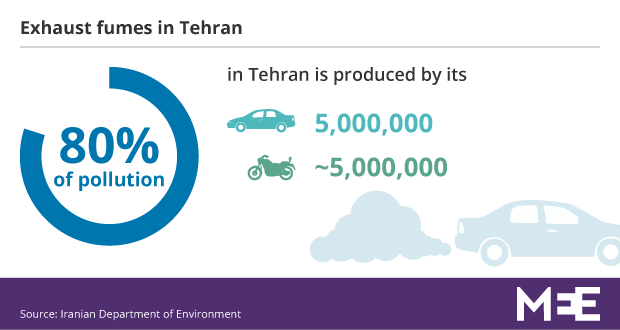 The deputy chief of Iran's Department of Environment, Saeed Motasaddi, told the ISNA news agency that urban sprawl was to blame, saying that the fast growth in urbanisation was fanning pollution.

He accused the municipality of making a profit by issuing too may out construction permits, dubbing a horrible mistake that had to be dealt with immediately.

While Tehran is the epicentre the pollution also closed primary schools in other major cities including Isfahan, Qom, Arak and Tabriz.

Last December, almost 400 people were taken to hospital with heart and respiratory problems caused by heavy pollution in Tehran, with nearly 1,500 others requiring treatment.

In 2012, pollution contributed to the premature deaths of 4,500 people in Tehran and about 80,000 in the country, the health ministry said.