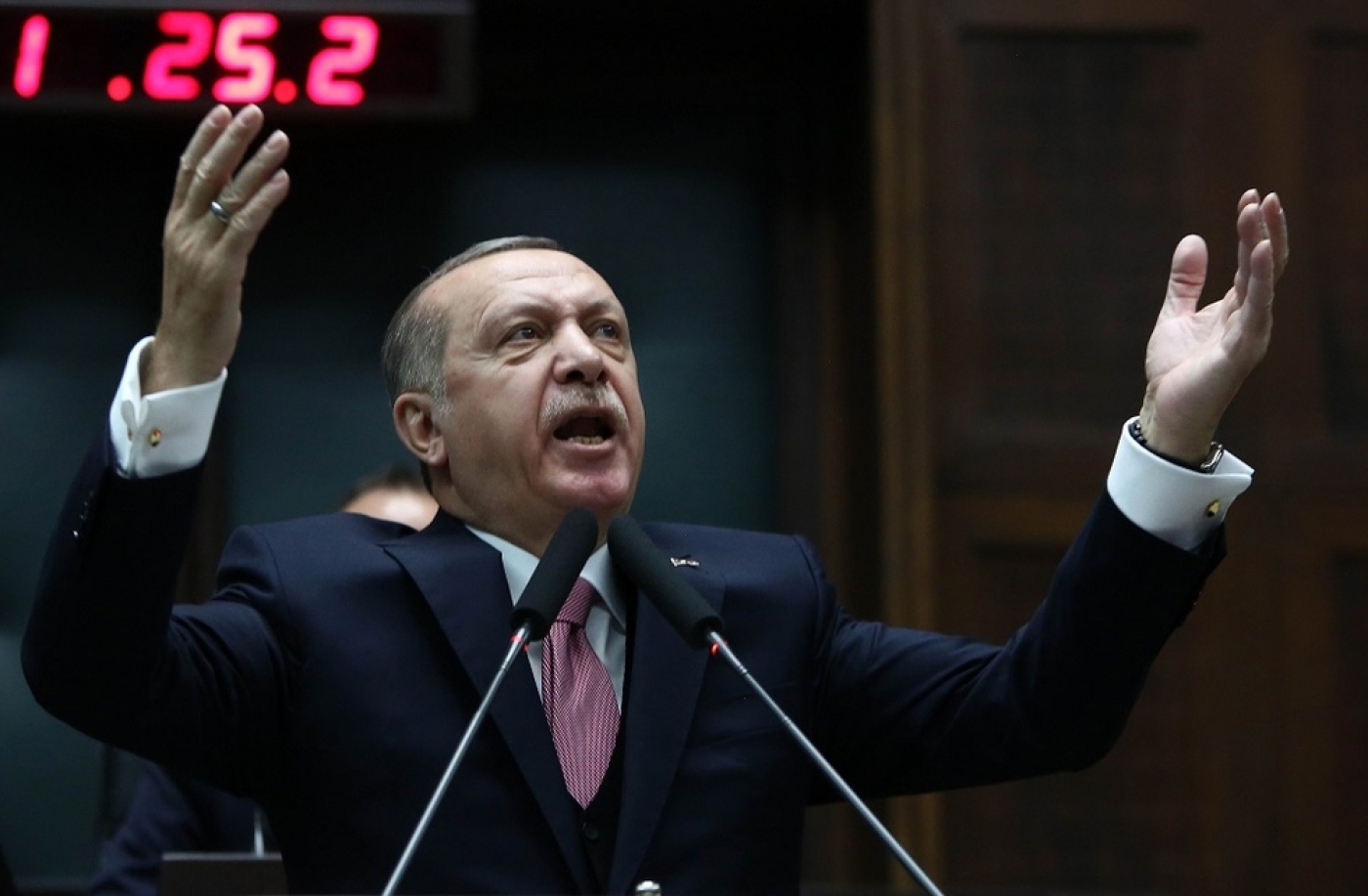 Erdogan said the Syrian deployment 'was seriously stopped yesterday... It was stopped' (AFP)
By
MEE staff

Turkey's president on Tuesday announced that a Turkish military siege on the northern Syrian town of Afrin was imminent, leading to increased fears that civilians in the densely populated urban centre could be at extreme risk.

"In the coming days quicker actions will be taken to lay siege to Afrin's city centre,” Recep Tayyip Erdogan told his party's MPs in parliament.

The announcement comes after reports over the weekend of a possible deal between the Syrian-Kurdish YPG and the Syrian central government to deploy Syrian army troops in the Afrin town centre to deter the Turkish advance.

Speaking to reporters after his speech in parliament, Erdogan said: "The [Syrian deployment] was seriously stopped yesterday... It was stopped."

Erdogan on Monday had spoken to his Russian and Iranian counterparts, Vladimir Putin and Hassan Rouhani, to discuss developments in Syria and Afrin.

"Yes, it was stopped after those talks,” Erdogan told reporters when asked if the YPG-Syrian government deal was scrapped after his conversations.

A meeting between Erdogan, Putin and Rouhani in Istanbul in April was also announced after these phone talks on Monday.

Ibrahim Kalin, a Turkish presidential spokesman, on Tuesday called news of such a deal "propaganda” but did not rule entirely rule out such discussions.

"Regardless of who does what, operation Olive Branch will proceed determinedly as planned and attain its goals,” Kalin said in a tweet.

Olive Branch is the name of second military offensive Turkey has launched into northern Syria. It began more than a month ago and aims at clearing the Afrin region of PYD/YPG elements, which Ankara considers as the Syrian extension of its own PKK group. It lists the PKK as terrorist.

Turkish officials first responded to reports of such a deal by saying they wouldn't mind a Syrian army presence as long as it didn't try to protect the YPG.

"If the regime is entering there to cleanse the PKK and PYD, then there are no problems," Turkish foreign minister, Mevlut Cavusoglu, said. "However, if it comes in to defend the YPG, then nothing and nobody can stop us or Turkish soldiers."

The announcement of an imminent siege on Afrin's centre has heightened concerns of increased civilian casualties and deprivation to medical access and other basic needs.

The monitoring group Airwars said the toll of civilian casualties in Afrin as of 14 February stood at 63-99 deaths caused by Turkish fire in Afrin's vicinity and 14-32 deaths caused by the YPG in Afrin and also in attacks on Turkish soil.

Overall we've tracked 67 civilian casualty events since start of Afrin. Based on available info, we assess 51 events as fairly reported - killing at least 77-131 civilians (14-32 by YPG fire in Syria and Turkey, and 63-99 by Turkish fire in Afrin vicinity) https://t.co/4SjTiAYw3O

US news agency, the Associated Press, has reported on grim conditions in Afrin as families seek shelter and respite from Turkish bombing raids.

While no recent census information is available, there were more than 30,000 people residing in Afrin centre in 2012 during the early days of Syria's war.

A large number of displaced people from within Syria are believed to have added to the town's population as they sought refuge in the then relatively peaceful Afrin.

These units are specialised in close quarter urban clashes and have experience from urban battles against the PKK in south-eastern Turkish cities in 2015 and 2016.