Leaders of Turkey, Iran and Russia use Ankara summit to express determination for co-operation on Syria, but Afrin weighs heavy on talks The presidents of Turkey, Iran and Russia on Wednesday appeared determined to continue their 15-month cooperation on Syria, ignoring crucial differences among themselves but often pointedly mentioning the sacrosanctity of the country's territorial integrity.

The Ankara summit brought together Turkey's Recep Tayyip Erdogan, Russia's Vladimir Putin and Iran's Hassan Rouhani, whose countries launched the Astana process in January 2017 seeking to facilitate de-escalation zones in war-torn Syria and aid the Geneva talks in bringing about a political solution.

Erdogan, often blunt to the point of being belligerent, opted for a soft approach despite a hint of differences - with Iran in particular - over Ankara's military incursion into Afrin since January.

"Syria's territorial integrity is sacrosanct for us and getting rid of terrorist organisations is vital to that integrity," said Erdogan. "It is also vital that all terror organisations be viewed in the same way and states be equidistant from all of them.”

The Iranian government, mostly through its state-controlled media, has been scathing in its criticism of Turkey's Afrin operation against the Syrian-Kurdish PYD/YPG militia and some unconfirmed Iranian media reports suggested Rouhani had asked for Afrin to be placed under Syrian government control at the summit.

Erdogan chose to focus on the positives of cooperating with Moscow and Tehran. He said Turkey's setting up of eight observation posts in Idlib recently was a sign that the deal on de-escalation zones was working and also a clear signal that Ankara remained committed to the process.

Rouhani said the region's biggest problem in recent years was foreign-backed terrorism with some countries training, financing and equipping terrorists.

At one stage in the Syrian conflict in late 2014, Turkey along with the United States were involved in a train and equip program for Syrian rebels fighting the Bashar Assad government.

"Some world powers like America would prefer terrorist groups like Daesh [Arabic acronym for Islamic State group] and Nusra to survive in the region for longer and serve their interests," he said.

In an about turn from indirect criticism to praise, Rouhani then said: "The best thing from today's summit for me was the agreement between the three of us on humanitarian aid delivery to the innocent suffering in Syria.”

"We had very constructive talks today. Our cooperation [since Astana] has reduced violence in Syria to a large extent.”

Rights groups say the numbers being killed in Syria's so-called "de-escalation zones" have risen since their creation last year.

The Moscow and Tehran-backed Assad government has intensively bombed the Damascus suburb of eastern Ghouta, with claims of the use of chemical weapons also rife.

Erdogan said he wanted to build a field hospital for the wounded from eastern Ghouta in cooperation with Russian armed forces.

Erdogan also questioned the humanity of those who carry out and back the attacks like those on eastern Ghouta.

"What am I supposed to feel when I hold a six-month infant in my arms. I am a father and the president of the Republic of Turkey. I say the people who do this cannot be human," he said.

Erdogan also asked for Putin and Rouhani's support for housing projects in safe zones within Syria.

He said Turkey has resettled 160,000 Syrians in the Jarablus and Al Bab area and was looking to do the same in Syria.

"I have asked this of the international community before and now I am asking the both of you. Let us consider housing projects in safe zones," said Erdogan.

He said the sight of people living in tents and containers was not pleasant.

The one thing all sides seemed to be in agreement on was US involvement in Syria.

Rouhani said the reality on contradictory remarks from US officials on their future presence in Syria had been revealed.

US President Donald Trump in the past 10 days on two occasions said he wanted the United States to leave Syria.

"America doesn't want to leave. It is just demanding that some countries pay it to stay there," he said.

Erdogan added: "Brother Rouhani did not mention the sum they want $7 trillion.”

The summit had kicked off on Wednesday morning with images of warm handshakes and a holding of hands by Erdogan, Putin and Rouhani.

Despite undercurrents at the press conference, the summit was still a success given the vastly differing priorities of Ankara, Moscow and Tehran in Syria.

Erdogan said the next three-way meeting of heads of state would take place in Tehran. Syria War
Trump: Saudi Arabia should pay for US troops to remain in Syria 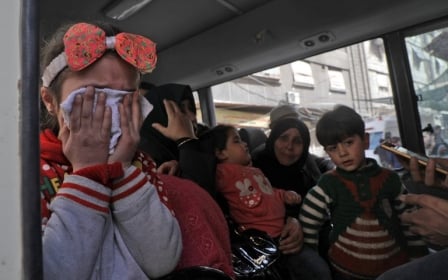