Erdogan: Turkey to fight IS and Kurds with 'same determination' Turkish President Recep Tayyip Erdogan vowed on Sunday to devote equal energy to combatting Islamic State (IS) militants and Syrian Kurdish fighters, on the fifth day of a major offensive that has left dozens dead.

"We will make any kind of contribution to the work to clear Daesh (IS) from Syria," Erdogan told a rally in the southern city of Gaziantep, near the Syrian border.

"For the issue of the PYD (Democratic Union Party) terror group in Syria, we have just the same determination," he added, referring to the main pro-Kurdish party in northern Syria and its People's Protection Units (YPG) militia.

On Sunday, Turkish forces ramped up their offensive, with Turkish warplanes and artillery pounding areas held by pro-Kurdish forces close to a town liberated from IS this week.

Turkey sees the US-backed PYD and YPG - which have links to Kurdish rebels in southeast Turkey - as terror groups and wants to keep them from taking control of the border on the Syrian side.

The US supports the Syrian Kurdish fighters as an effective adversary of IS in the area. Escalating tensions between Turkish armed forces and Syrian Kurdish rebels in the newest battlefront of the complex war may endanger US forces in the area and complicate their mission to eradicate IS, the Wall Street Journal reported.

Ankara said its raids had killed 25 Kurdish "terrorists" and that the army was doing everything it could to avoid civilian casualties.

But the Britain-based Syrian Observatory for Human Rights said at least 40 civilians were killed in strikes on two areas - the first report of significant civilian casualties since the start of Turkey's operation "Euphrates Shield."

The monitor also said at least four Kurdish fighters had been killed and 15 injured in the bombardments south of Jarabulus, the town taken from IS by Turkish-backed Arab rebels on the first day of Turkey's incursion on Wednesday.

Addressing thousands of flag-waving supporters in Gaziantep, Erdogan said he was "ready and determined to clear our region of terror groups. We will absolutely not allow any terror activity on or near our borders."

Gaziantep is the city where a suicide bomber blew himself up in the middle of a wedding party last weekend, killing 55 people.

Turkey blamed the attack on the IS. Erdogan reaffirmed a previous statement that the bomber was a child aged just 14.

Days later, Ankara launched the two-pronged Syria operation with the stated aim of clearing the border area of both IS and the Kurdish fighters.

There was no immediate comment from US officials about the escalation of fighting between the two sides, both of which receive American military support, the WSJ said. It was unclear what part the US-led coalition against IS, of which Turkey is a member, played in the air campaign this weekend.

The clashes underscore the complexity of the US-led international coalition campaign to reverse IS’s territorial hold in Syria and the dangers faced in that mission, the WSJ said. American special operations forces are embedded with the YPG and earlier this month helped them oust IS from the town of Manbij, about 30km from Saturday’s hostilities. In general, those US special operations forces have close contact with their Turkish counterparts, and they rely on Turkey for their rear supply lines, according to people familiar with the situation.

Turkey's coming into conflict with the YPG or their Arab allies could further complicate the US  military campaign, the BBC said.

Ankara wants to force the Kurds to withdraw to the east of Euphrates River, stopping short of establishing a corridor to link two Kurdish-held areas in northwestern Syria, the BBC said.

Turkey enjoys tacit support from Russia, Syria's Assad government and Iran in acting to prevent further territorial gains by the Kurds and their allies, the BBC said. The US, on the other side, has said it will try to prevent Turkey coming into conflict with its allies in the region.

A Turkish campaign against the Kurds in Syria may also risk igniting further clashes with the Kurdistan Worker's Party (PKK) militants inside Turkey, the BBC said. The PKK recently increased its attacks significantly in correlation with the Turkish operation inside Syria.

Why the war in Syria only ever seems to get worse https://t.co/17e1wgeOCo pic.twitter.com/Vy1KTZXpFs 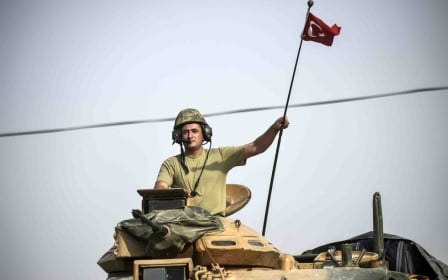