More than 53 million people were expected to head to polling booths in Turkey on Sunday in an historical vote for the 91-year-old republic's first directly elected president. Erdogan won the historic election wtih about 52 percent of the vote, defeating his main rival, Ekmeleddin Ihsanoglu, with nearly all votes counted.

Ihsanoglu, the joint candidate of the two main opposition parties in parliament, the centre-left Republican People's Party (CHP) and the far-right Nationalist Movement Party (MHP)who received an estimated 38 percent of the vote, admitted defeat on Sunday. 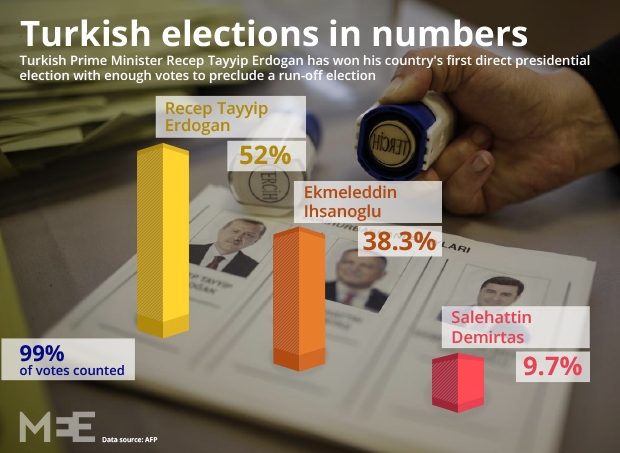 Most polls had predicted that Erdogan would win in the election in the first round. Candidates had to win over 50 percent of the votes, or head to a run-off election.

But despite Erdogan's win, there are signs that the outgoing prime minister and now incoming president will be preside over an increasingly divided electorate. Observers say the bellicose leader, who plans to change the constitution to bolster the role of president if he wins, has increasingly adopted polarising rhetoric, galvanising his mostly conservative Muslim supporters, while alienating opponents.

A poll conducted by the Pew Research Center released last week, found Turks are split between those who are happy with Erdogan's performance and those who believe that he is taking the country down the wrong path. The poll also found that there had been a drop in approval ratings for Erdogan as prime minister since 2007. It found that conservative Muslim voters were more likely to support him.

It was a divide that was on clear display on the streets of Istanbul on Saturday, as voters told Middle East Eye how they would be voting.

In the conservative working class neighbourhood of Kasimpasa, where Erdogan was born and raised, many voiced their support for the man they overwhelmingly say represents the national interest.

"We love him. He has a national vision and good ideas," said Murat Kulli, 34, a barber from the far north eastern city of Kars, also noting his economic credentials. "Ninety-nine percent of Turkey is Muslim, so it's also very important that the leader puts that identity of the country forward. That's a beautiful thing."

"He puts Turkey in a better position in the world and brings it back to its essence, to its Ottoman history," Cerlik said. "He reflects the national will, which is based on Ottoman culture and Islamic values."

But while there is no doubting the level of support for the leader, critics say that his approach has cultivated increasing sectarian sentiment in the country and points to a system of governance based on majority rule, warning ethnic and sectarian minorities, liberals and secular Turks will have little voice in the "New Turkey" to which Erdogan has pegged his campaign.

"When you look at his campaign, it immediately throws back the question of what is 'Old Turkey,'” said Ali Etrati, a victim of police violence at last year's mass anti-government protests. "And that can only be the secular Turkey of Ataturk."

"Just take a look at Erdogan's speeches; 'he is Alevi, he is Zaza, but I am a Sunni,’ has been his slogan during the rallies. He is running the most bigoted, sectarian and divisive election campaign of the Republican era," said Ali Kenanoglu, head of the Hubyar Sultan Alevi Culture Association, who claims that Alevis, estimated at between 7 and 20 million of the country's 76 million population, have been systematically discriminated against.

"Alevis have been subjected to increased pressure under Erdogan’s rule than any other time. Alevis were not allowed to join in any cadres of the state apparatus, those who were employed by the state were either fired or taken off active duty," he said.

Kenanoglu criticised the CHP coalition for selecting a conservative Muslim as their joint candidate, in a bold attempt to grab some of Erodgan's Sunni Muslim votes.

"The Alevi majority perceives they are left with no option in the Presidential elections. Ihsanoglu is from the same line as Erdogan, a conservative nationalist. In this case, it was calculated that these votes would not go to Erdogan."

Soli Ozel, professor of International Relations at Istanbul's Kadir Has University said Erdogan runs a campaign "to discredit anyone who speaks out against him."

"He sees himself as the only true representative of the people, whereas all those who don't agree with him are traitors or don't have an interest in the objectives of the country," he said.

In the lead up to Sunday's vote, Erdogan had received almost rock-star reception at a series of rallies across the country, making emotional appeals to his sea of supporters, hinged up on his support for Gaza in the latest Israeli offensive there, jibing his main rival over his nationalist shortcomings and presenting Turkey as the defender of the Muslim world.

"In Iraq, in Syria, in Somalia, we are saying we are here for you, Palestine," he told an estimated one million supporters at a mass rally in Istanbul last Sunday.

CHP lawmaker, Binnaz Toprak acknowledged Erdogan was "charismatic" but accused him of using Islam to stir emotions. "Obviously he is charismatic and a good speaker, but I personally believe people are sick of the screaming, the emotional language, the ridicule. The country has never been so polarised," she said.

The new president will serve a term of five years in office and will be allowed to serve a maximum of two terms.