Nearly a million Turks living abroad have already cast their ballots at 113 embassies and consulates last week, while a total of 175,006 polling stations were open countrywide (AFP)
By
MEE and agencies

Turkey's long-dominant Justice and Development Party (AKP) scored a stunning electoral comeback on Sunday, regaining its parliamentary majority in a poll seen as pivotal for the future of the troubled country.

The party, founded by President Recep Tayyip Erdogan, won over 49 percent of the vote to secure 316 seats in the 550-member parliament with nearly all votes counted, easily enough to form a government on its own.

"Today is a day of victory," a beaming Prime Minister Ahmet Davutoglu told a crowd of jubilant supporters in his hometown. "The victory belongs to the people."

He appealed for unity in the country, destabilised by renewed Kurdish violence and bloody attacks and facing escalating concerns about the faltering economy and what critics say is Erdogan's authoritarian rule.

"Today there are no losers but winners," he said. "We are coming to rebuild a new Turkey along with each and every citizen."

Opinion polls predicted a replay of the 7 June election results, in which of the 16 parties registered to contest the election only the three major parties and the pro-Kurdish Peoples' Democractic Party (HDP) were expected to pass the 10 percent threshold and gain seats in the assembly.

"Our people clearly showed in the November 1 elections that they prefer action and development to controversy," President Recip Tayyip Erdogan said in a statement giving his first reaction to the election result, adding that voters had backed "unity and integrity".

It is a huge personal victory for Erdogan who may now be able to secure enough support for his controversial ambitions to expand his role into a powerful US-style executive presidency.

Nearly a million Turks living abroad have already cast their ballots at 113 embassies and consulates last week, while a total of 175,006 polling stations were open countrywide.

During the elections - overseen by observers from civil society groups, political parties and international monitors - voters select a party, rather than a candidate, across 81 provinces.

This time round, the pro-Kurdish People's Democratic Party (HDP), led by Selahattin Demirtas, lost support but appeared to have scraped over the 10-percent threshold to stay in parliament.

Demirtas said it was not a "fair election" after his party halted campaigning in the wake of the IS attacks that targeted pro-Kurdish activists.

"But it's still a big victory, we have lost one million votes but we have stood tall against this policy of massacres and fascism," he said.

The main opposition Republican People's Party (CHP) scored about 25 percent of the vote, similar to its June result.

Analysts said voters had turned away from nationalist and Kurdish parties.

"Erdogan rode the wave of violence back to power," said Aykan Erdemir of the Washington-based Foundation for Defense of Democracies (FDD) and a former Turkish opposition MP.

Brief clashes erupted between police and protesters in the main Kurdish city of Diyarbakir.

A report by the Brookings Institution think-tank had warned that whatever the outcome, "the challenges facing Turkey are growing by the day".

The political landsape has changed dramatically in Turkey since June, with the country even more divided along ethnic and sectarian lines.

Many Turks fear a return to an all-out war with Kurdistan Workers' Party (PKK) rebels after violence shattered a 2013 truce in July, just a month after a pro-Kurdish party won seats for the first time and denied Erdogan's AKP a majority.

The threat of religiously fuelled violence has also overshadowed the elections after a string of attacks blamed on the Islamic State (IS) group, including twin suicide bombings on an Ankara peace rally last month that killed 102 people - the bloodiest in Turkey's modern history.

Support for the Nationalist Movement Party (MHP) fell to around 11 percent, with commentators suggesting its voters shifted to the AKP. 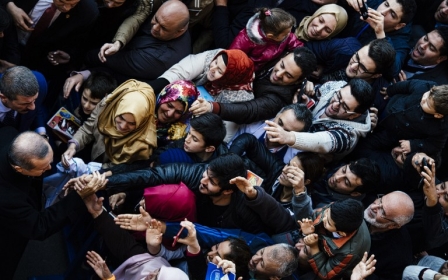