Euro 2020: Petition calls for racists to be banned from football matches for life From left, England players Marcus Rashford, Raheem Sterling and Jadon Sancho inspect the pitch ahead of the UEFA Euro 2020 last 16 game against Germany at Wembley Stadium, London, on 29 June 2021 (AFP)
By
Nadda Osman

An online petition calling for a lifetime ban on attending games for fans who took part in racist abuse aimed at England's football players in the Euro 2020 final against Italy has garnered hundreds of thousands of signatures in under two days.

The petition, which was started on Monday by three women known online as #TheThreeHijabis, had been signed by over 800,000 people by the time of publication.

In a statement posted alongside the petition, its creators - Shaista Aziz, Amna Abdul and Huda Jawad - called on England's Football Association (FA) and the UK government to ban all of those who carried out racist abuse against football players from attending matches for life. “As multi-racial football fans, we finally feel represented by this anti-racist and inclusive England team. We could not be more proud or inspired by our magnificent team and by their talent, bravery, leadership and love for all,” the statement said.

“Their vision is an inclusive vision and this matters more than EVER - it’s why we feel proud of this team and why they’re so cherished and loved by many of us. There should be no room for racists and bigotry in football or society.”

On Sunday evening, England players Marcus Rashford, Jadon Sancho and Bukayo Saka faced racist abuse from some fans after all three missed penalties in the Euro 2020 final match against Italy.

Italy won the championship after beating England 3-2 in a penalty shootout following a 1-1 draw.

The match marked England reaching the final of a major tournament for the first time since winning the World Cup in 1966.

Italians are being attacked at the stadium by the English.

Black people are already being abused and attacked by white football fans on the streets.

Racism is truly alive and well in England. A seriously ill country. pic.twitter.com/IsdvKard74

Earlier this month, Aziz, one of the petition's creators, posted a widely shared thread on Twitter detailing the importance of an anti-racist and inclusive England football team.

She went on to explain how many British people of colour would often avoid going out during England games due to fear of verbal and physical abuse from fans.

“I’ve attended England matches at Wembley. I’ve felt extremely tense and anxious - not just because of what’s happening on the pitch but what was happening off it too with racist, homophobic chants by England ‘fans’ and racist booing of England players by so-called ‘fans’ around me,” Aziz wrote at the time.

England team manager Gareth Southgate has spoken up about the racist abuse lobbed at team members, calling it "unforgivable". The governing body of European football, UEFA, also denounced the attacks against the players.

“We stand by the players and the FA’s call for the strongest possible punishments,” it said.

“This England team deserve to be lauded as heroes, not racially abused on social media. Those responsible for this appalling abuse should be ashamed of themselves,” he tweeted.

The condemnation was also echoed by Prince William, who tweeted to say that he was "sickened by the racist abuse" and that "it is totally unacceptable that players have to endure this abhorrent behaviour”.

There is absolutely no place for racism in football or anywhere else.

Those responsible for the disgusting online abuse we have seen must be held accountable - and social media companies need to act immediately to remove and prevent this hate.

I think @instagram need to be doing their bit and proactively removing racist peoples accounts and comments from the players that have been targeted. You talk the talk insta so walk the walk.

A number of public figures joined in the condemnation of the racism, including former England striker Alan Shearer and Formula One racer Lewis Hamilton.

Racism has long been in issue in football and among football supporters. Rashford, who plays for Manchester United, had previously experienced racist abuse online in May after the team lost the Europa League final.

Political statements were met with scorn by many social media users, who noted that Johnson's condemnation of racism rang hollow given the premier's own history of xenophobic statements, including comparing veiled Muslim women to letterboxes.

The problem with how we talk about racism in the UK is we isolate it to - real racists are THOSE "bad" people who are on social media who must be punished. The reality is "nice" people uphold systemic racism. So if this doesn't change, we will be having this debate repeatedly. pic.twitter.com/fTvymChpEx

British Home Secretary Priti Patel's own condemnation of racism was also met with sarcasm, as many called out her heavy-handed crackdown on immigrants and asylum seekers.

How dare you. Your vile discriminatory politics are directly linked to the racism that lives within this country. You fuel the hate you condemn. https://t.co/3nk2NSsIVc

“You don’t get to stoke the fire at the beginning of the tournament by labelling our anti-racism message as ‘gesture politics’ and then pretend to be disgusted when the very thing we’re campaigning against happens,” he tweeted, in reference to Patel's criticism of players taking the knee in protest against racism. 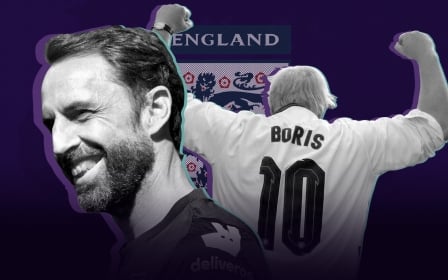