Evacuation of militants from south Damascus on hold

Jaish al-Islam, whose leader was assasinated in government-claimed attack on Friday, was supposed to provide safe passage A plan to evacuate thousands of Islamic State and al-Qaeda-affiliated fighters and civilians from three besieged districts of Syria's capital was on hold Saturday, a day after an air strike killed a rebel leader.

Zahran Alloush, 44, was the commander of the Jaish al-Islam (Army of Islam) movement, the predominant opposition faction in the Eastern Ghouta rebel bastion east of Damascus.

A senior member of Jaish al-Islam said three planes had targeted a "secret meeting" of commanders, and confirmed that Alloush was among those killed.

His death, in an air raid claimed by President Bashar al-Assad's government, was seen as dealing a heavy blow to the nearly five-year uprising and also complicating a fragile peace process.

It also halted the planned evacuation of some 4,000 people, half of them militants, from three southern districts of Damascus.

The plan, according to a government official, would see the evacuees transferred out of Qadam, Hajar al-Aswad and the besieged Palestinian camp of Yarmouk on Saturday and into northern Syria.

They had been expected to include members of the Islamic State (IS) group and al-Qaeda-affiliated al-Nusra Front.

But a security source close to the negotiations told AFP that the plan was now on hold because of Alloush's death.

"Jaish al-Islam was supposed to provide safe passage through areas east of Damascus for the buses heading to Raqqa," IS's Syria bastion, the source said by phone.

"About 1,200 people were supposed to leave today [Saturday], but the death of Zahran Alloush means we are back to square one," he said.

He said buses that had been standing by to transfer the evacuees left empty and "the plan was on hold until Jaish al-Islam reorganises itself". Another source close to the negotiations said there was a "delay" in implementing the deal but that it was "still in place".

The Syrian Observatory for Human Rights described the deal as "frozen".

"It was frozen, but not cancelled, because of logistical issues linked essentially to the difficulty of providing safe passage," said Observatory head Rami Abdel Rahman.

The deal came after two months of intense negotiations between Syria's government and district leaders, according to the Britain-based monitor.

In April, IS militants attacked the Yarmouk Palestinian camp, fighting al-Nusra units there for control.

Their subsequent advance into Qadam in August took them closer than ever to central Damascus.

A similar deal earlier this month in the central city of Homs saw 2,000 rebels and civilians leave the last opposition-held neighbourhood.

The deal saw evacuees sent to areas of Syria with worse conditions than they suffered under siege in Homs and, as a result, some locals chose to stay rather than leave, as MEE reported this month. 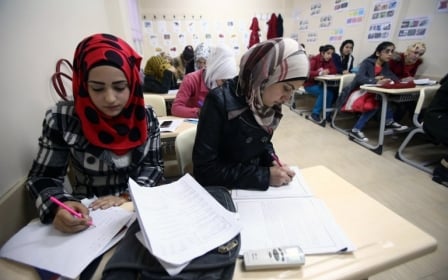