Ex-ambassador: Israel used my father to cover up ethnic cleansing 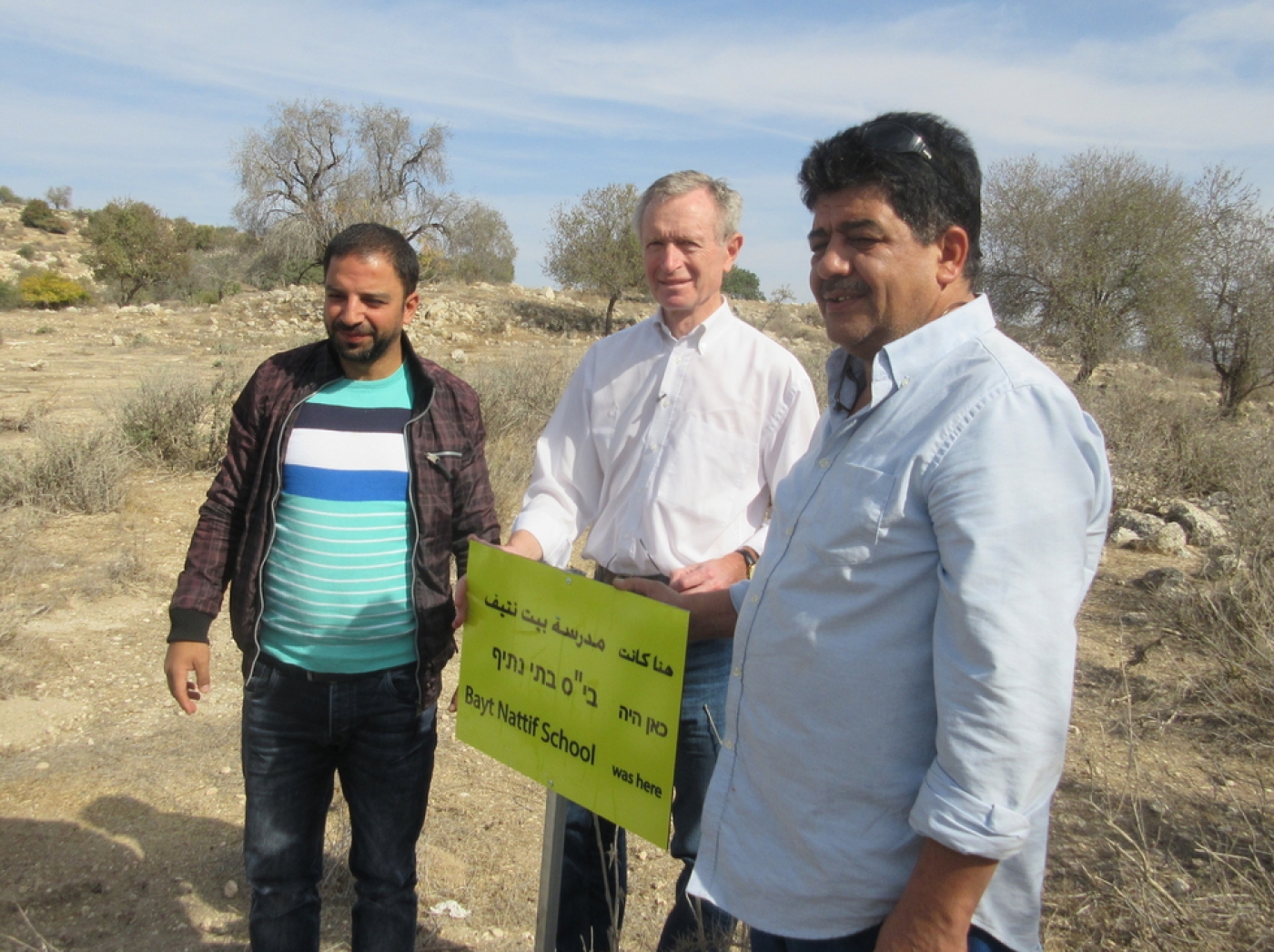 QALQILYA, West Bank - A former Dutch ambassador was due to plant 1,100 olive trees in the West Bank on Sunday to make amends, he said, for the fact that Israel had exploited his family’s name to “cover up an act of ethnic cleansing”.

Erik Ader, a former ambassador to Norway, said the trees were his way of apologising for a similar number of pine trees planted in Israel in the 1960s to honour his father.

The Rev Bastiaan Jan Ader, who was executed by the Nazis in 1944, was named a “Righteous among the Nations” in 1967 by Israel’s Yad Vashem Holocaust museum. He had helped hundreds of Dutch Jews escape the extermination camps.

Ader said he had been shocked to discover a decade ago that under the small conifer forest dedicated to his father were concealed the ruins of a Palestinian village.

All of the 2,400 Palestinian inhabitants of Bayt Nattif, south-west of Jerusalem, were expelled in 1948, the year Israel was established. The Israeli army destroyed the 350 homes there and none of the villagers has ever been allowed to return.

Ader reserved especial anger for the Jewish National Fund, an international Zionist charity with semi-governmental authority in Israel, that had raised funds from Dutch Jews to plant the trees.

He said those who made the donations had been deceived and did not know what their money was used for.

“It is scandalous what JNF did,” he told Middle East Eye. “These trees served both as a way to prevent the refugees from returning to their homes and to conceal the act of ethnic cleansing that was committed against them in 1948.”

He added: “The fact that they used the name of my father, who paid with his life for upholding human rights, to carry this out makes it all the more shameful. They have made him complicit in the village’s ethnic cleansing.”

Ader also turned his fire on the Dutch government for taking part in the original dedication ceremony of the forest planted over Bayt Nattif. “They must have known what had happened here but they raised no objections,” he said.

The former ambassador was due to join a group of farmers and activists on Sunday planting hundreds of trees in the small village of Farata, close to Nablus in the West Bank.

He said he had selected Farata because he had learnt during a visit in 2010 of repeated attacks by armed Jewish settlers on the village and its groves. Over the past decade settlers from neighbouring Havat Gilad have cut down and burnt trees, stolen the harvest and assaulted Farata’s farmers.

As recently as last month settlers were reported to have beaten families from Farata as they tried to harvest olives.

One of Farata’s farmers, Zahi Suwad, aged 43, said the trees would restore to the villagers income that had been lost from the repeated attacks.

“The coordinated strategy of the settlers and the Israeli army is to drive us off our land through this constant pressure so that they can take it for themselves,” he told MEE. “These trees will help us to keep working the land and stay in our village.”

Muhannad Qaisy, coordinator of the Olive Tree Campaign, which organised the planting, said the trees donated by the former ambassador had sent “a powerful message to Palestinians that he stands with them against these acts of injustice”.

Two days earlier, Ader had taken an emotional journey to Bayt Nattif, escorted by Khader Dibs, whose late father, Hamed, was among those expelled from the village in 1948.

The Dibs family, who live in the Shuafat refugee camp in East Jerusalem, have Israeli residency permits. Today they are the only Bayt Nattif family still able to travel freely into Israel and visit their former village.

Organisers had hoped more refugees would be able to attend to hear Ader’s statement of apology. But other families are in camps in Jordan and the West Bank, many in Bethlehem, and can only enter Israel with a difficult-to-obtain permit from Israel.

Dibs said in the mid-1970s, as a boy, he had joined his grandfather on the family’s first visit to the village after the 1948 war. It had been possible to reach Bayt Nattif again only after Israel occupied Jerusalem and the West Bank in 1967.

“He saw the village lying in ruins and was devastated,” he told MEE. “He sobbed inconsolably. He wanted to return to his lands here till his dying day.”

Dibs said his family tried to preserve a connection to the village by bringing the children a few times a year, often holding a picnic amid the ruins.

Today, part of the village’s lands are used by Israelis as a hiking trail.

Dibs said Ader’s apology was important to the villagers, and reassured them that not everyone in the international community had turned a blind eye to the refugees’ plight.

The former ambassador arrived at the forest on Friday to discover the dedication plaque to his father had been smashed by vandals a few days earlier, after news of the event was publicised online.

He addressed a group of several dozen Israeli activists from an organisation called Zochrot, or Remembering in Hebrew, which tries to educate Israeli Jews about the Nakba, the mass dispossession of Palestinians in 1948 to create a Jewish state.

Ader told them he was “ashamed” of his country for giving Israel “a blank cheque” to carry out acts like the expulsions from Bayt Nattif.

The village is one of more than 500 that were razed after some 750,000 Palestinians were expelled from their homes in 1948. In most, the JNF has planted forests to conceal the destruction.

Neighbouring Jewish communities are often unaware that they are sitting on lands that once belonged to Palestinians.

Ader said the JNF was responsible not only for planting forests over the villages destroyed in 1948. It also assisted Israel in taking over Palestinian lands in the West Bank and East Jerusalem, and in dispossessing Israel’s Bedouin citizens in the Negev through forestation programmes.

He called on his government to end the tax-deductible status of donations to the JNF.

He concluded that it was time for Israel to create a truth and reconciliation commission like the one that followed the abolition of apartheid in South Africa.

“Instead of covering up its sins by means of the JNF, instead of denying it’s past, it would help if Israel finally stood up and acknowledged the sins it committed in its creation,” he said.

Dibs, 51, led the group on a tour of the destroyed village, locating the ruins of the mosque, school and homes, as well as crumbling agricultural terraces and the cemetery.

At each spot Zochrot erected a signpost in three languages – Hebrew, Arabic and English – identifying the rubble.

Parts of Bayt Nattif were under immediate threat of further destruction, said Dibs, from the rapid expansion of the city of Beit Shemesh. Cranes and apartment buildings loomed over the group as a signpost was placed at the cemetery.

Ader said he had first started to have doubts about what was underneath the forest when he visited it a decade ago, while he was ambassador to Norway. Close to his father’s forest, he found old carob, almond and pomegranate trees and the agricultural terraces.

“I raised the question with the JNF about who these other trees belonged to, but got no real answer,” he said.

After he returned to Oslo, he kept up the pressure long distance on the JNF. “They promised they would do the research and get back to me. Well, I’m still waiting to hear from them more than a decade later.”

Dan Weinstein, a spokesman for the JNF, issued a statement to MEE rejecting the criticisms, saying the organisation was dedicated to “environmental development”.

He said the JNF “has never deprived a person [of] his or her property … and has not planted a single tree on land that does not belong to it or to the state.”

Niva Grunzweig, of Zochrot, said Ader had approached the organisation for help in finding out about the site and to locate Bayt Nattif’s refugees.

“This is a very significant moment for us,” she told MEE. “We hope Erik’s apology to the refugees of Bayt Nattif for the misuse of his family’s name might encourage Jews to follow suit.

“It may open their minds a little to consider whether it is time to take responsibility for what was done in their name during the Nakba, to apologise and to begin a process of reconciliation.”

For many decades the JNF has collected donations from Jews in Europe and the United States in its small blue boxes, telling donors their money would help to “make the desert bloom”.

“It was a total nonsense,” said Ader. “These trees were not planted on barren land. They were planted over lands that were already bearing fruit, as can be seen in Bayt Nattif.”

Grunzweig said Zochrot had sent an invitation to the Dutch embassy to attend the apology ceremony but had received no response.

The JNF is currently planting an Ambassador’s Forest – in honour of serving ambassadors – over the Bedouin village of Al-Araqib in the Negev. So far, only one ambassador, Ismail Coovadia of South Africa, has publicly refused the trees named for him.

Ader chose Sunday to plant the trees in Farata because it was the 72nd anniversary of his father’s execution by the Nazis.