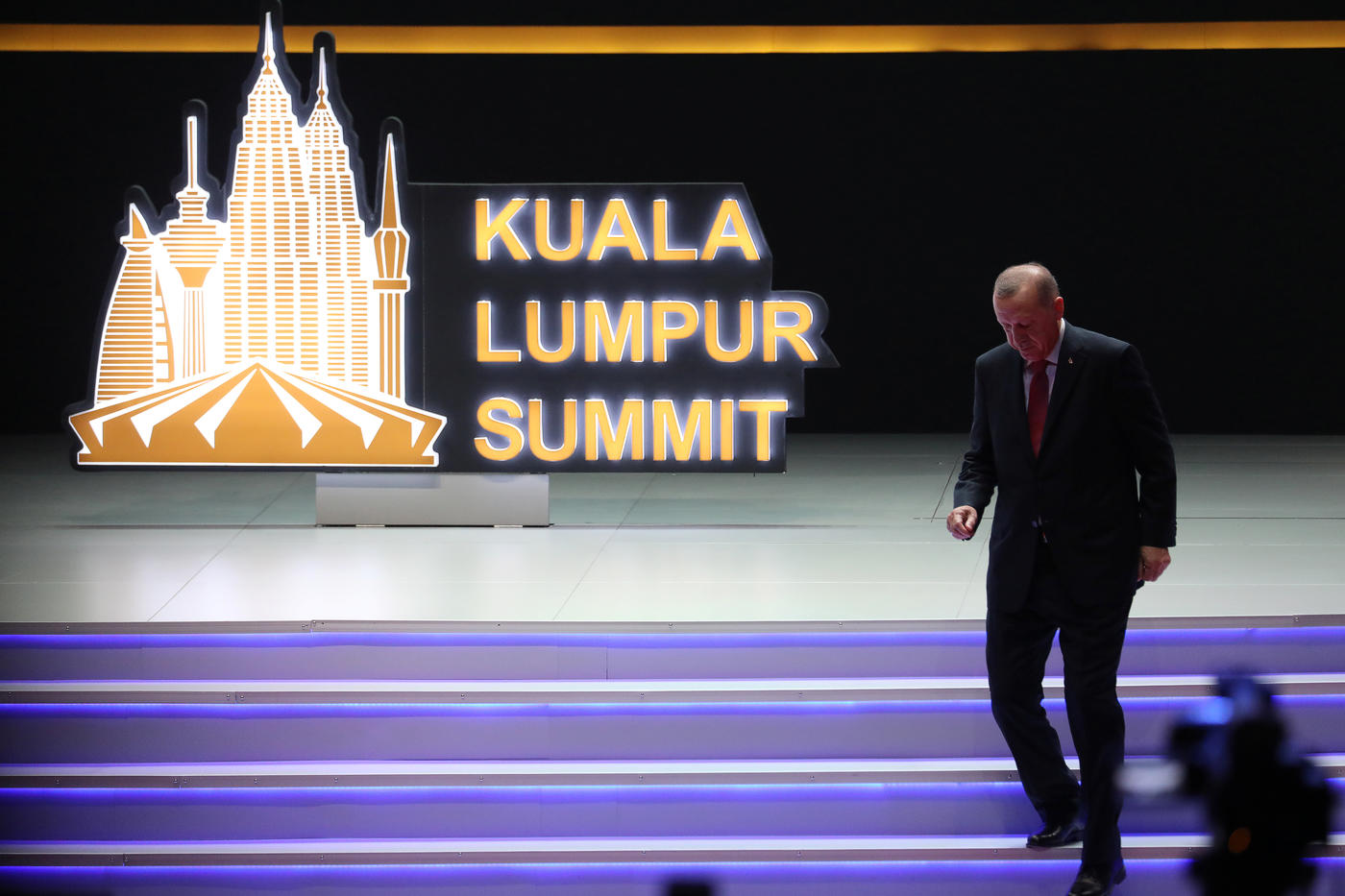 Saudi Arabia was so spooked by the prospect of major Muslim nations convening at the Kuala Lumpur Summit in December, outside the control of the Organisation of Islamic Cooperation (OIC) which it chairs, that it prepared a media campaign to belittle its importance, Middle East Eye can reveal.

The Saudi Ministry of Media compiled a series of messages which local media organisations and commentators were “instructed” to issue, as well as targeting newspapers, websites and television channels in countries including Pakistan, Indonesia and several Arab states.

According to a ministry document obtained by MEE, the aims of the campaign were: to highlight the role of the OIC in serving the causes of the Islamic Ummah; to belittle the Malaysia summit; and to highlight the aid Saudi has given to the Islamic world, especially Palestine.

Translation: The plan of the media campaign to confront the moves aimed at convening a mini Islamic summit upon invitation from Malaysia

The Malaysia summit on 19 December was attended by the leaders of Iran, Turkey and Qatar, and delegates from 56 countries.

Pakistan’s Prime Minister Imran Khan, the head of the world’s second largest Muslim-majority nation, was a notable absentee, after strenuous Saudi efforts were made to stop him from attending. 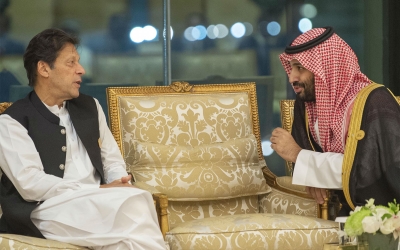 Khan bowed to the pressure, sending his foreign minister in his place, but afterwards regretted his decision.

Speaking at a press conference held earlier this month alongside Kuala Lumpur Summit host Mahathir Mohamad, the Malaysian prime minister who resigned on Monday, Khan said: “Some of our close friends felt that the conference would divide the Ummah, which was not the purpose of the conference. I feel that it is the duty of the Muslim countries to educate the western countries and other nations about Islam.”

The Saudi Ministry of Media acknowledged the importance of the summit despite its efforts to undermine the event.

The document states that the key purpose of their campaign was to “belittle the importance of the summit and the decisions that may emerge out of it in view of the absence, or the downgrading of the level of participation by Islamic states that play a pivotal role in leading the Islamic world and in serving its causes”.

It told its journalists to write that the convening of a mini-summit in Malaysia outside the framework of the OIC could “encourage the creation of similar blocs among other Islamic states that have not been invited. These states would be tempted to convene other summits. Consequently, efforts would be wasted and so would be the endeavour to reform the structure of the organisation”.

The document also told them to highlight Imran Khan’s withdrawal from the summit.

“The absence of pivotal Islamic states from the Malaysian summit, and the cancellation of the participation of Pakistan’s Prime Minister Imran Khan, and downgrading the level of representation to that of the Foreign Minister, reflects the lack of conviction on the part of a country that has been instrumental in setting up this summit that it would not be possible to achieve any success outside the framework of the OIC.”

More revealing still were the “implementation mechanisms” revealed in the secret document.

These included: “Instructing authors of opinion columns to criticise any grouping formed for the purpose of achieving narrow political objectives outside the OIC,” along with the preparation of TV news reports highlighting the role of the kingdom in founding the OIC, and the hosting of political analysts.

Translation: Instructing authors of opinion columns to criticise any grouping formed for the purpose of achieving narrow political objectives outside the OIC, which is considered the second largest international organisation after the United Nations.

These were put out on a host of Saudi TV channels, radio stations, and newspapers.

The document also lists a number of foreign media organisations at which the propaganda campaign was to be targeted.

These included the Dawn, Daily Jang and Nawa-i-Waqt newspapers in Pakistan; Al-Rai, Ad-Dustour, and Ammon newspapers and websites in Jordan; and other news channels and publications in countries including Egypt, Sudan, Iraq, Lebanon, Indonesia and India.

Zaffar Abbas, the editor of Dawn, told MEE in an email that his newspaper was independent and was not involved in any Saudi propaganda campaign.

"Dawn in the oldest Pakistani newspaper, and has always followed an independent policy, regardless of the views of the government of Pakistan, or its internal and external policies," Abbas wrote.

"On the issue of the Malaysian summit, it remained quite critical of the Pakistani Prime Minister’s decision to cancel his participation, and this remains our position on the matter.

"I am not sure from where the Saudi Ministry of Media got this impression, and who gave them this assurance, if at all.

"We are committed to remain independent, and even if at some point we feel that one of the two sides is wrong, we will take a clear position on the matter, regardless of what the Saudis or Malaysians want, or what the Pakistan government desires."

Middle East Eye has sought comment from all of the above named publications but had not received any response from the others at the time of publication.

In implementing the plan, the Ministry of Media listed getting “a number of writers in the Arab and Islamic press to write about highlighting the role of the OIC and cast doubt on the benefit of convening a mini Islamic summit outside the framework of this organisation”. 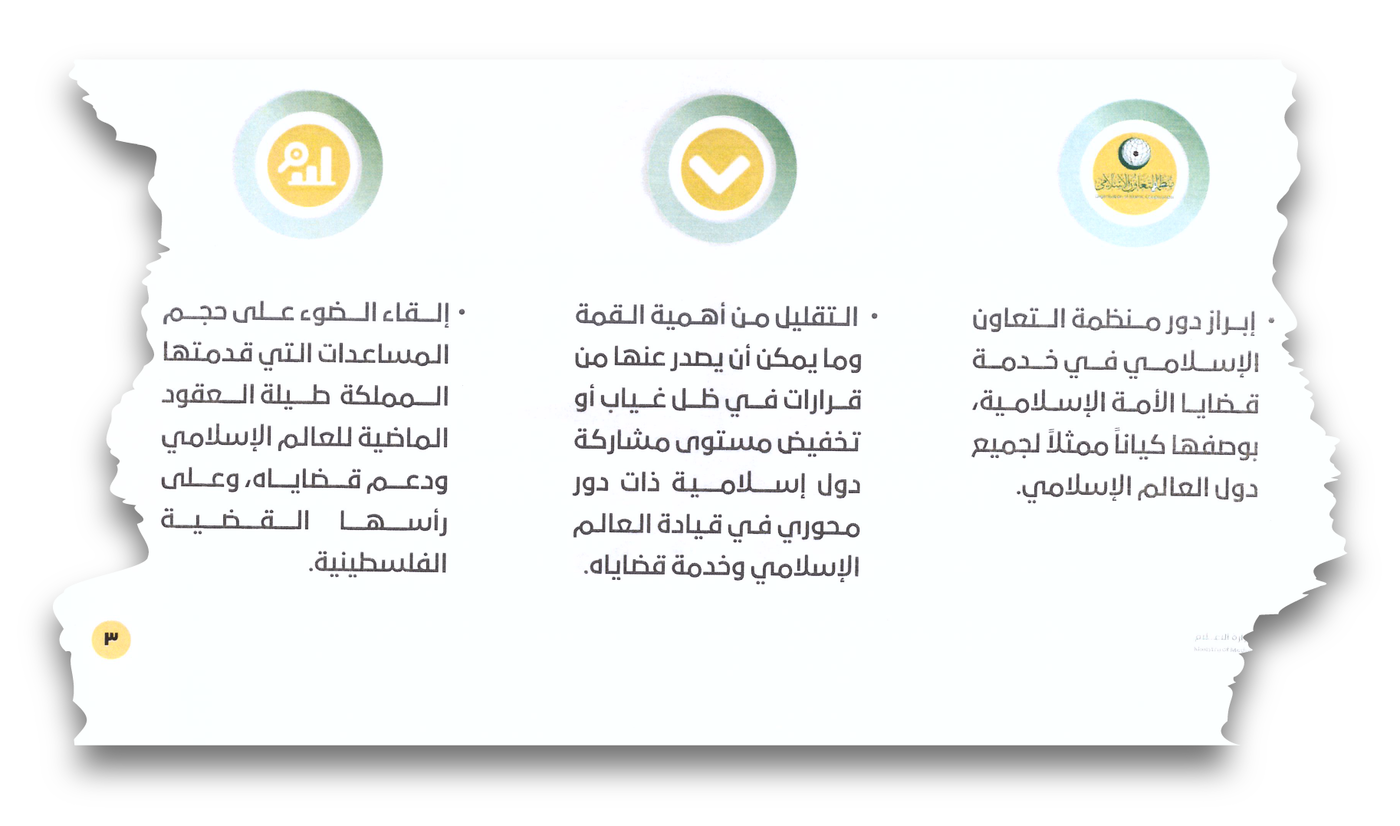 Translation: Objectives of the media campaign.

* Highlight the role of the OIC in serving the causes of the Islamic Ummah, in its capacity as a representative of all the countries of the Muslim world.

* Belittle the importance of the summit and the decisions that may emerge out of it, in the view of the absence or the downgrading of the level of participation by Islamic states that play a pivotal role in leading the Islamic world and in serving its causes.

* Shed light on the amount of aid provided by the kingdom throughout the past decades to the Islamic and the support its causes, foremost of which is the Palestinian cause.

A social media campaign, the document reveals, involved “sending the messages in both Arabic and English to influencers in the social media in the Arab and Islamic countries and to the influencers locally”.

The prime minister’s office in Malaysia would not comment on the document after Mahatir’s offer of resignation on Monday.

A Turkish official, speaking on condition of anonymity, said that there had been ongoing anti-Turkey propaganda efforts by Saudi authorities since the murder of Saudi journalist Jamal Khashoggi in October 2018.

“We aren’t even surprised by any of this,” the official said. “They continuously smear Turkey.... They never downgrade their anti-Turkey efforts.

“They spend millions of dollars on this, making American and British companies rich to relay ridiculous talking points to their own parrots.”

'They spend millions of dollars on this, making American and British companies rich to relay ridiculous talking points to their own parrots'

A Turkish diplomat said Turkish President Recep Tayyip Erdogan was angry at Saudi and Emirati officials for putting pressure on Imran Khan to cancel his participation into the summit.

“The Saudis thought Turkey and Qatar were trying to forge a new division with the south Asian countries by also adding Iran to the picture. They were totally mistaken. It was regional countries that invited Turkey and Qatar. It wasn’t led by Ankara,” the diplomat said.

Erdogan at the time said that Khan was pressured to cancel his visit.

Speaking to reporters in the Malaysian capital in December, he said: "This isn't the first time that the Saudi Arabia and Abu Dhabi administrations have taken such an attitude.

"Unfortunately, we observe that Saudi Arabia is putting pressure on Pakistan. See, there are [Saudi] promises to Pakistan regarding its central bank.

"Beyond everything else, there are four million Pakistan workers in Saudi Arabia," said Erdogan.

"They [Saudi Arabia] tell them that 'we can send them back, and instead take Bangladeshis’.

"On the other hand, regarding the central bank, they tell [Pakistan] that they could withdraw their money. And following similar threats, Pakistan, which is facing harsh economic conditions, found itself in a position to take such [a decision not to attend the summit].”

Middle East Eye contacted the Saudi Ministry of Media and the Saudi embassy in London but had not received a response by the time of publication.

Khashoggi
Twitter suspends thousands of pro-Saudi accounts following release of report into Khashoggi murder
Inside Saudi
Loujain al-Hathloul attends court to object to the terms of her prison release
Inside Saudi
'He’ll be like Khashoggi': Wife fears for Saudi-Australian detained in Morocco 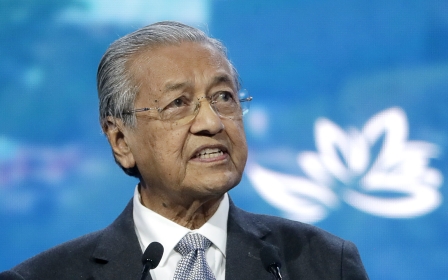 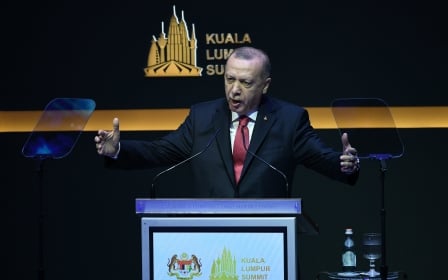