The brother of Nimr al-Nimr, the Shia cleric executed in Saudi Arabia at the weekend, on Monday condemned retaliatory attacks on the kingdom's diplomatic missions in Iran, insisting: "We love our country."

"We appreciate your love towards the martyr #Sheikh_AlNimr who lives in our hearts but we refuse attacks on #Saudi ambassies in #Iran or others," Mohammed al-Nimr tweeted in English.

Mohammed had previously expressed his dismay that the Saudi authorities had not handed the corpse of Nimr, who was executed along with 46 others on Saturday, over to his family.

In a statement he expressed the family's hopes that "officials would answer our legitimate wish quickly by giving us the body of the martyred sheikh so that he would be buried in his hometown Awamiya."

The death of Sheikh Nimr has provoked outrage across the Middle East and exacerbated tensions between Saudi Arabia and regional rival Iran.

Iran's foreign ministry accused Saudi Arabia of stoking regional tension after the kingdom broke off diplomatic relations and said Iranian embassy staff must leave within 48 hours, following the firebombing of the Saudi embassy in Tehran on Sunday. It later announced that it was banning all flights between the Kingdom and Iran, until the latter started to "act like a normal country."

Saudi's move was followed by regional ally Bahrain, which on Monday announced that it was also cutting diplomatic ties with Tehran.

On Saturday, Bahrain's Interior Ministry that it would take legal action would be taken against anyone attempting to use the executions in Saudi Arabia to "heighten sectarian tensions or to incite violence", according to a statement by the ministry.

Later on Monday, Sudan also announced it was cutting ties with the Islamic Republic, according to the Saudi Press Agency, while the United Arab Emirates said it would also be "downgrading" ties with Iran.

The UAE has extensively trading deals with Iran - with half a million Iranians in the country - possibly explaining their hesitancy in breaking full relations.

"Saudi Arabia sees not only its interests but also its existence in pursuing crises and confrontations and attempts to resolve its internal problems by exporting them to the outside," said Iranian foreign ministry spokesperson Hossein Jaber Ansari.

"What happened in regard to diplomatic missions, it is not the first time such a thing happens worldwide," Ansari said.

By severing diplomatic relations, Saudi Arabia is "continuing the policy of increasing tension and clashes in the region," he added.

Jubeir did so after the two countries clashed over the kingdom's execution on Saturday of a Shia cleric, Nimr al-Nimr, an act that Iran's supreme leader said would be met with "divine revenge".

Khamenei was joined in his condemnation of Nimr's execution by Iraq's top Shia authority, Grand Ayatollah Ali al-Sistani, who called the death sentence "an unjust act of aggression".

The oil-rich rivals have also been divided over the nearly five-year war in Syria, where Iran is backing embattled President Bashar al-Assad, and the conflict in Yemen where a Saudi-led coalition is battling alleged Iran-backed Houthi rebels.

Ansari, who said that the Iranian diplomats had not yet left Riyadh, insisted Iran had always protected diplomatic missions to ensure the safety of diplomats and dealt with transgressions.

Iran's President Hassan Rouhani had on Sunday condemned the violence at the embassy as "totally unjustifiable" and judicial officials said 44 arrests had been made.

Anwar Eshki, a retired Saudi general, told Egypt's Mehwar TV on Monday that he hoped that other countries in the Gulf would follow the lead Saudi Arabia and close their Iranian embassies.

A Russian source told AFP on Monday that the country was "ready to serve as an intermediary between Riyadh and Tehran."

"If our partners Saudi Arabia and Iran show they are ready and willing (to meet), our initiative will remain on the table," the source said.

Some Iranian protesters on Monday criticized Iran's foreign ministry, saying it should have taken the initiative and broken ties first with Riyadh over the execution of Nimr. 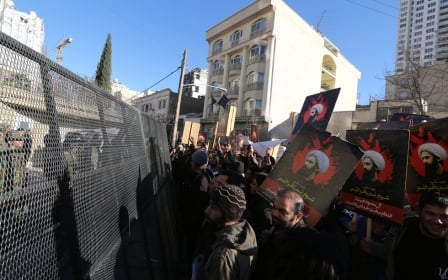