Some women have reduced their involvement, others are working in secret, fearing retaliation against female volunteers 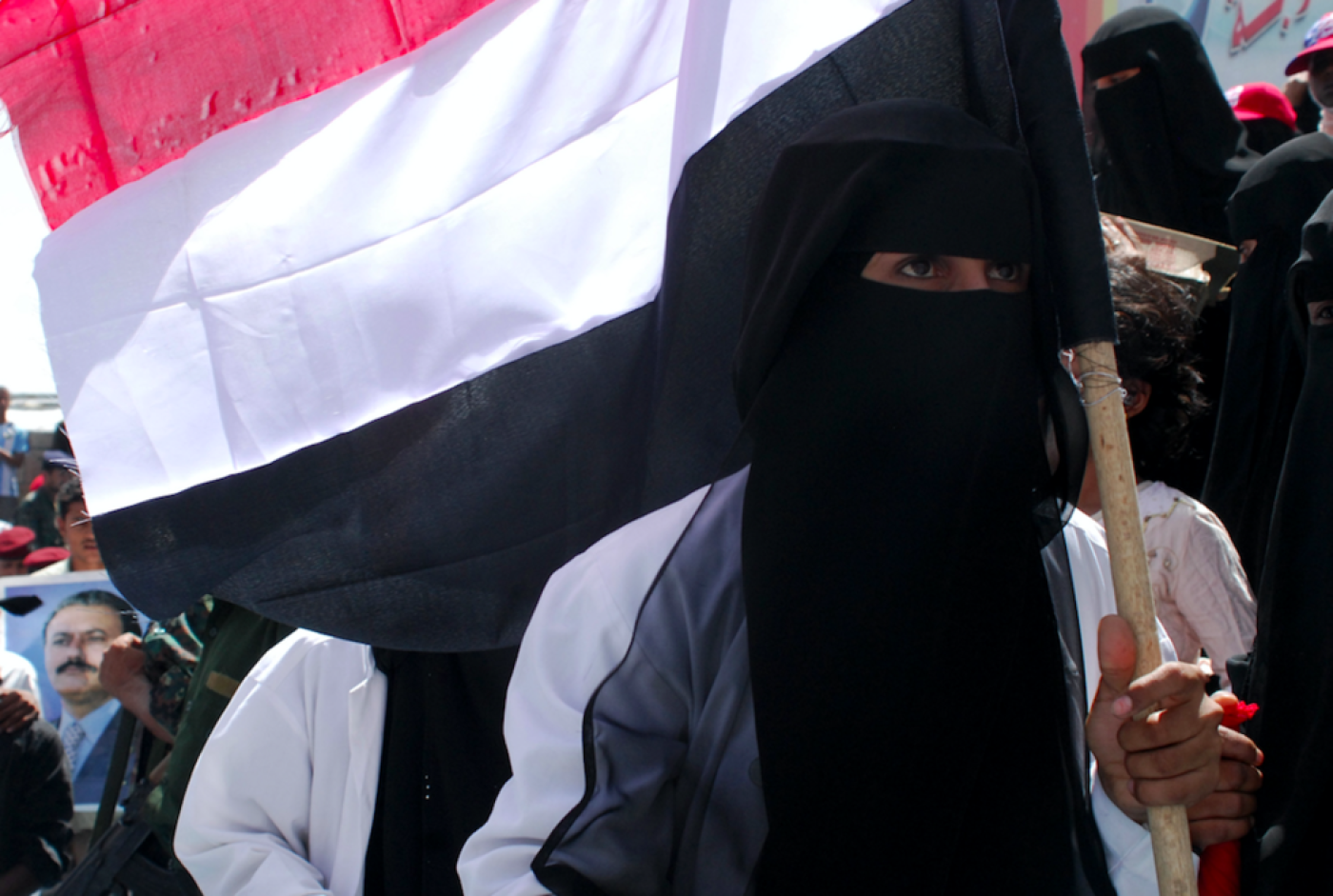 Women, men have been working together to document violations against civilians in Taiz, Yemen (AFP)
By
MEE correspondent

Naseem al-Odaini, an activist in Taiz, has been monitoring Houthi violations in the war-torn Yemeni city since April 2015, using her phone and notebooks to take photos and document civilian casualties.

Working with more than 20 women and men volunteers within the initiative "Love it," she helps reveal violations to the world through social media and various media outlets.

Three months ago, however, noted Islamic scholar Abdullah al-Odaini issued a fatwa (religious ruling), forbidding female and male activists from working together, arguing that Islam prohibits the free mixing of women and men.

The fatwa has created resentment and fear among activists, who reply that they too are supporters of the anti-Houthi Popular Resistance, the same as Abdullah al-Odaini, who is also a member of the Yemeni parliament and imam of Taiz's al-Noor mosque.

War erupted last year in Yemen after Houthi rebels took the capital, Sanaa. A Saudi-led coalition then began a bombing campaign to stop the Houthis, who are allied with former President Ali Abdullah Saleh and who Riyadh accuses of being backed by Iran.

While Houthis managed early on to encircle Taiz, Yemen's third-biggest city, they have been unable to capture it amid opposition from multiple armed factions, collectively known as the Popular Resistance.

"We are working hard to let the world know about the suffering of Taiz civilians,” activist Naseem al-Odaini told Middle East Eye. “We thought all Taiz residents were focusing on helping each other, so we were shocked to hear this fatwa from an imam who is also a supporter of the Popular Resistance.”

She said the ruling was creating fear among women involved in her initiative, as it could make them targets of hardline Islamist groups.

Many women have reduced their workload, she said, but they haven't stopped completely.

“The incitement against female volunteers by Islamists is a new obstacle on top of existing ones, but we will fight to monitor the violations against civilians in Taiz; such fatwas cannot stop us," she said.

A key obstacle has been a lack of cooperation from victims who are often reluctant to speak to activists out of a fear of reprisal from the Houthis and their supporters.

Still, female volunteers say they have a key role to play because they can often get more information from victims. They can speak comfortably with girls and women, while men are restricted from talking with women by social norms in conservative Yemeni society.

Odaini and her friends, however, say they do not agree that Islam forbids their work as activists, calling imams who prohibit their efforts "extremists".

The fatwa also surprised Iman Morei, another activist working with the "Love it" initiative and other projects.

"In addition to monitoring the violations against civilians, we launch campaigns via social media using hashtags, which usually get positive reactions from officials, so I was expecting encouragement from the imams rather than incitement against us," Morei told MEE.

Morei and her friend launched several hashtags, including #BreakTaizSiege, and other online campaigns to spread awareness of the situation in the city. She said the group was working hard to inform more people about the suffering in Taiz.

Morei agreed that Islam does not forbid people of different genders from working together, adding that the issue is disputed among religious scholars.

“But this is not the proper time to debate it,” she said. “We have many other priorities that Taiz residents need, so we will keep up our work."

She confirmed that the fatwa has forced many women in the initiative to work less, or in secret, out of fear.

"I hope that all groups and people in Taiz unite to help civilians; after the liberation of the province we can criticize each other," Morei said.

Some scholars in the country and beyond back the view that Islam does not oppose men and women working together. They cite stories of women who participated in battles along with the Prophet Mohammad as proof that the two sexes can work together for a cause.

Shia Houthi imams, who are traditionally no more no more liberal than their Sunni counterparts in Yemen, have largely accepted this view and seem to be encouraging Houthi female activists who are monitoring violations carried out by Saudi-led coalition in Sanaa and other Houthi-held provinces.

But in Taiz city, the religious community has largely come out in support of the controversial ruling.

Several imams in Taiz have agreed with Abdullah al-Odaini’s religious ruling. Sheikh Abdul Hamid Ahmed, imam of al-Suna Mosque, told MEE that he also objects to female activists working alongside men, similarly arguing that it is against the teachings of Islam.

He said God would not help people who disobey him, making the work of the female volunteers a sin that does not serve society.

“Women can establish some initiatives that are special for them. Only women would be able to work under those programmes. There is no need to work alongside men," he said.

“We do not want to solve our problems the wrong way. We are facing the Houthi invaders in Taiz, but we do not need to address the problem by breaking Islamic laws. We are working hard to inform the women in Taiz to preserve their Islamic behaviour and avoid forming friendships with men.”

He added that men can replace the female activists who are currently working.

The rift is reflected within the very make-up of the Popular Resistance in Taiz, which includes several groups that hold often-conflicting ideas. While Salafi fighters adopt stricter views on gender segregation, for example, socialists have no objections to women working with men.

Such ideological differences are among the the main problems facing the anti-Houthi front in Taiz, a leader in the Popular Resistance told MEE, speaking on condition of anonymity.

“Any group against the Houthis and [their ally, former president Ali Abdullah] Saleh can join the resistance,” he said. “There is no other condition. Different groups have joined the resistance.”

He said women are helping uncover violations carried out by the Houthis, and described their work as important. But he was also quick to stress that imams were also helping the city by encouraging people to resist the Houthi "invaders".

"I hope that all groups within the resistance can rise above minor conflicts and focus on the liberation of Taiz, and then later we can solve any disputes," he said. 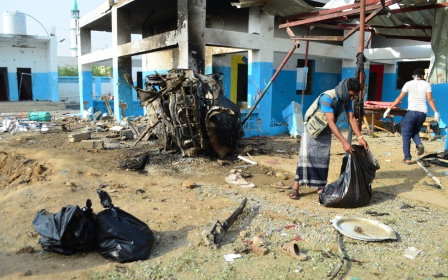 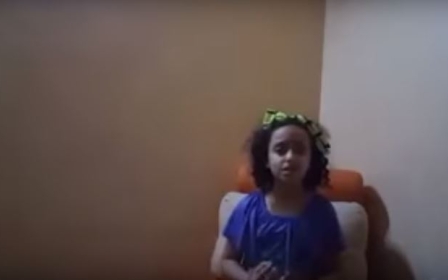 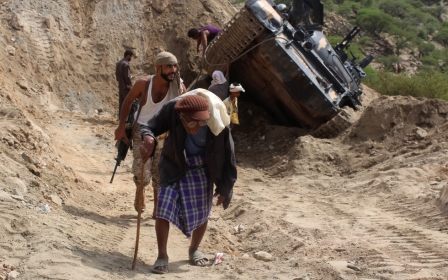