Fight for Ramadi essentially on 'pause': US official The Islamic State has surprised Iraqi troops by using conventional war methods, where the US trained them in counterinsurgency strategies (AFP)
By
MEE and agencies

The fight to retake Ramadi from Islamic State (IS) fighters has been on an "operational pause" and Iraqi troops weren't trained to deal with the group's battlefield techniques, a US official said on Thursday.

US military spokesman Colonel Steve Warren, speaking via video from Baghdad, told reporters that the effort had been delayed in part because of record summer temperatures but also because of the way IS fighters had defended the city, which they seized in mid-May.

Iraq had planned to quickly retake Ramadi, but Warren acknowledged the fight had been tough.

"Ramadi has been a difficult fight," he said. "I feel like we are coming out of what was essentially was an operational pause."

He said IS had built "defensive bands" around the city - essentially fields littered with improvised explosive devices (IEDs).

"They are using these IEDs almost as landmines to create these minefields, which they can then cover with (gun)fire," Warren said.

"This is not what we trained the Iraqi army back in the early and middle 2000s to fight against. We trained and built a counterinsurgency army, and this is much more of a conventional fight."

He said US experts had put together some special training to deal with the challenge.

In order to get through these "minefields," Warren said the Iraqi army was ordering bulldozers and "explosive line charges" that can be used to detonate a minefield.

Warren added that US advisers were encouraging Iraqi generals to complete the task of retaking the city.

"We are all urging them to begin with the utmost haste to finish this fight in Ramadi," he said. "It's a very important fight and it needs to be finished."

Congressional Republicans have cited Ramadi as evidence of a failed American strategy. Republican Senator John McCain of Arizona said it's clear the US is not winning, "and if you're not winning in this kind of warfare, you are losing," the Associated Press reported.

US President Barack Obama advocated patience in Ramadi, while US Defence Secretary Ash Carter said the Iraqis, who had no US-trained soldiers with them and had fled Ramadi, "showed no will to fight".

IS seized large areas of Iraqi territory in a June 2014 offensive, and a US-led coalition is carrying out daily airstrikes to assist Iraqi forces, which have made little progress on the ground in recent weeks. 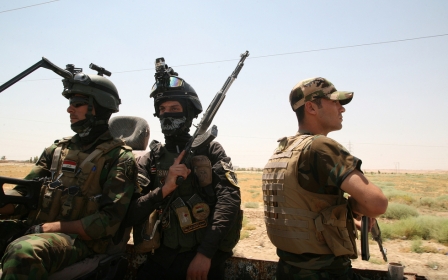