‘Fighting to die’: Fresh IS attacks delay liberation of Sirte SIRTE, Libya - With Islamic State (IS) forces now carrying out attacks outside Sirte, the final offensive to liberate the town has been delayed while Libyan forces secure the surrounding desert area.

“Daesh are becoming active again outside the town and have started targeting us on the road between Sirte and Misrata,” fighter Hatham told MEE, using an alternative acronym for IS.

“They are planting IEDs on the road to Sirte, which have already killed two of our men, and another vehicle was targeted by an RPG.”

The attacks took place along the 150-kilometre stretch of desert highway between Sirte and the village of Abu Grain, liberated four months ago.

The Libyan forces, operating under the UN-backed Government of National Accord (GNA), have now imposed a curfew, banning civilian vehicles from using the road between 8pm and 8am and increasing checkpoints, in an attempt to secure the road.

IS members are also upping their suicide operations outside Sirte. An attempted suicide attack on a checkpoint outside Misrata on Thursday was thwarted by Libyan troops, while a fortnight ago the militant group successfully carried out a suicide bombing on a logistics position used by Libyan forces on the outskirts of Sirte, in an area that had been liberated for several months.

“I passed an ordinary civilian BMW driven by a guy in normal Libyan clothes on my way to the front line, but I felt something wasn’t right because he was driving very fast and flashing his lights,” said fighter Mohammed.

“We heard the explosion within minutes, when he reached our petrol station and food depot, and then we realised he must have been a suicide bomber.”

Mohammed claimed the vehicles came from the area of Abu Hadi, a village on the southern outskirts of Sirte where the slain Libyan leader Muammar Gaddafi was born.

Dual car-bombings in the capital Tripoli on Thursday, targeting the naval base home to the GNA and the foreign ministry, have so far gone unclaimed by any group.

This string of attacks indicates that IS presence on the central Libyan coastline had already spread into secret locations outside Sirte before the Libyan forces began their assault on the town.

The spokesman for the Sirte operation, Brigadier-General Mohammed al-Ghassri, confirmed that the final offensive to liberate the town was being delayed to ensure that IS was completely eliminated from the surrounding areas.

This continued IS presence, he said, was also why the United States had authorised a further 30 days of air strikes on IS targets in Libya.

“We need America’s continued support because, although Daesh is confined to one-and-a-half square miles of central Sirte, some elements have spread to the peripheries,” he said.

“If we liberate the centre now, these residual Daesh fighters on the peripheries will become more active and we can expect more suicide vehicles and more IEDs. We have to secure the whole area.”

Ghassri said the final offensive was being coordinated with British and American teams that have been supporting the battle, mainly with intelligence and logistics, since early May.

Local people had claimed for months that top IS leaders were no longer inside Sirte but had relocated to other Libyan towns and villages at the outset of the war, forming new militant sleeper cells that would continue to pose a threat long after the liberation of Sirte.

Armed units are now patrolling the desert south of Sirte where IS militants are believed to be hiding.

Commander Mohammed Issa, who heads one of the main front-lines in Sirte, still insisted the fall of Sirte was imminent.

“The final offensive is now being planned, and could be in the next 72 hours,” he told MEE last week. “We realise we are fighting against a suicidal enemy, so the next battle will be really big and hard - it will be the mother of all battles.”

But, almost a week later, there had still been no major new advance.

He said the suicidal nature of IS militants meant one militant was often equivalent to three ordinary fighters, and they were battling even more fiercely now that they were compressed into such a compact area.

“IS are not fighting to live, they are fighting to die and will give this battle everything they’ve got,” he said. “We are expecting them to make serious attacks against our positions because they want to reduce our numbers to the minimum.”

He slammed European governments for not supporting the operation against IS in Sirte.

“We are not happy with the EU because they didn’t give us any help, but we know they are helping [General Khalifa] Haftar in the east, but Haftar is actually supporting terrorism because he let IS members leave [the eastern town of] Derna to come to Sirte,” he said. “We are not extremists. We are normal Muslims who believe that there should be peace and religious freedom for everyone.”

Issa pointed out that IS in Libya was a global threat, saying graffiti found in Sirte’s small port read: “This is our departure point for Europe,” and that documents discovered in IS offices showed there were a number of European militants, including French and Germans, among their ranks.

Despite delays to the final offensive, front lines in the town remain modestly active, with Libyan forces still targeting IS sniper positions. Several units also carried out a successful operation to retrieve the corpses of two dead soldiers on the edge of Sirte’s District Three - the only area still under IS control. Seven IS militants were reportedly killed and several new premises seized, including Sirte's civil court, a bank and an ammunition storage facility.

Libyan forces are also keeping a constant watch for suicide vehicles, still one of IS’s preferred and most deadly weapons.

“A US air strike destroyed a suicide vehicle this morning,” said young fighter Ali, driving through the battle-scarred streets of Sirte’s District One. “And we have destroyed several ourselves during this last week. Because IS are running out of metal, the suicide bomb trucks aren’t bullet-proofed like before, so it’s easier for us to stop them now by shooting the driver.”

He predicted that the liberation of Sirte would take at least two more offensives to achieve, a feeling echoed by other fighters.

“We know IS don’t have many fighters left because now they leave their dead in the street whereas before they had enough men to take the bodies, because we rarely found them,” said Abdusalem. “But they know they are now fighting a desperate battle so they are using anything and everything they have against us. They are still a dangerous and difficult enemy.” 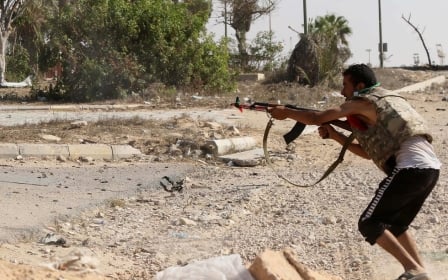