A US governor has blamed Palestinians for Israel's ongoing occupation of their land, just weeks before the United States plans to unveil the economic portion of its "deal of the century" peace plan.

Florida Governor Ron DeSantis, a longtime supporter of Israel and a member of Donald Trump's Republican Party, made his comments during a trade delegation visit to Israel this week.

"If you look at this whole conflict, to me, the biggest problem has been that Palestinian Arabs have not recognised Israel's right to exist as a Jewish state," DeSantis said during a news briefing at the Hilton Tel Aviv on Monday morning.

"That kind of denialism poisons really everything," he continued.

DeSantis's visit to Israel comes as Washington intends to unveil the economic portion of the "deal of the century" to solve the Israeli-Palestinian conflict next month in Bahrain.

Trump administration officials have touted the plan as a way for Palestinians to benefit economically, promising investments and other cash benefits.

But Palestinian advocates have rejected the proposal, stressing that investments and business initiatives will not fulfil their quest for equal rights and statehood.

Palestinians also say the Trump administration is not an honest broker, as the US president has provided both tacit and public support for Israeli Prime Minister Benjamin Netanyahu and his government's policies.

In the meantime, Florida - an important swing state that will be key in Trump's bid for re-election in 2020 - has become one of the most staunchly pro-Israel states in the US.

DeSantis travelled to Israel over the weekend with more than 90 delegates, as the visit aims to strengthen economic and environmental ties between Florida and Israel.

DeSantis, who served in the US House of Representatives between 2013 and 2018, pointed out that during his last trip to Israel two years ago he helped "scout" locations for the US embassy's move to Jerusalem. 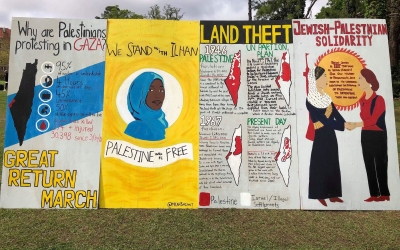 He also said he was one of the main supporters of the Trump administration's recent recognition of Syria's Golan Heights as Israeli territory.

During Monday's news briefing, the governor announced plans to lift Florida's sanctions against Airbnb after the company said last month that it would rescind plans to delist properties in illegal Israeli settlements.

"I don't want to penalise a company for doing the right thing," DeSantis said. "They made a bad decision but they rectified the error and that's what we want to see."

During his visit, DeSantis also plans to sign into law a bill that classifies certain criticisms of Israel as antisemitic in Florida.

The legislation has drawn sweeping condemnation from Palestine and free speech advocates who say it violates the US Constitution.

While the bill was passed last month, DeSantis waited for his trip to Israel to sign it.

Also on Monday, the governor met with GOP mega-donor Sheldon Adelson at Ariel University, which is located in an Israeli settlement of the same name in the occupied West Bank.

DeSantis received the Honorary Fellowship Award in honour of his commitment to Israel.

He also signed a memorandum of understanding between Florida Atlantic University and Ariel University, which aims to "strengthen the bond" between the two institutions, he said on Twitter.

The 90-plus delegates that joined DeSantis on the six-day trip include academics, politicians and business people.

On Wednesday, DeSantis and his cabinet are set to have a meeting at the new US embassy in Jerusalem after attending this year's Israel-America Business Summit with Israeli companies.

The following day, the delegation will meet with Netanyahu for a visit to the Old City of Jerusalem before heading back to Florida on Friday.