Sanders trades barbs with Biden over Iraq, while Warren says all combat troops should be withdrawn from region 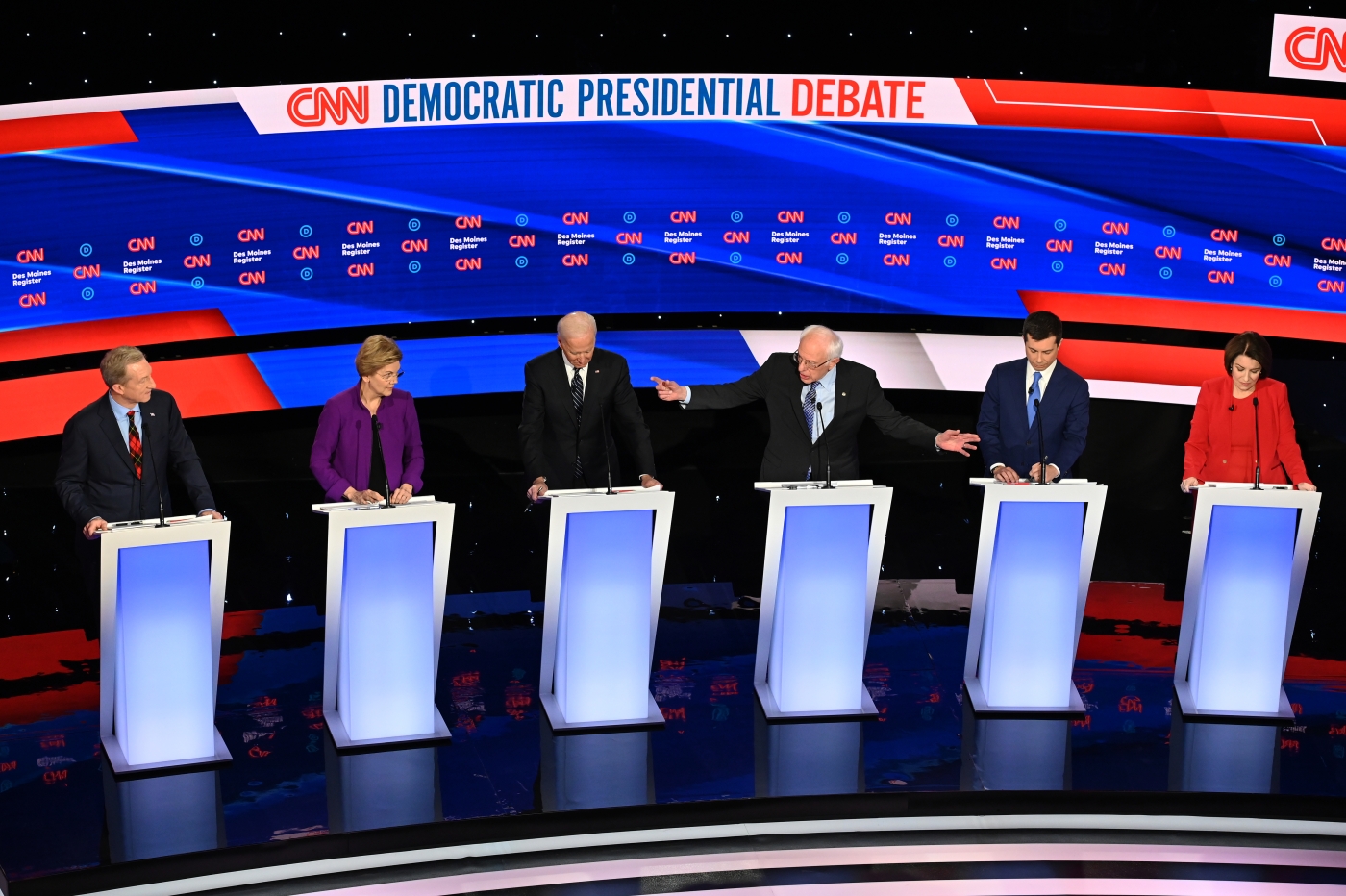 Tuesday marked the first democratic primary debate since the US assassinated Iranian general Qassem Soleimani, and unsurprisingly, America's role in the Middle East dominated much of the exchanges.

The six presidential hopefuls sparred over the US presence in Iraq, voting records on issues of war and peace and curbing Iran’s nuclear programme.

US troops in the Middle East

Asked about US military presence in the Middle East, Senator Elizabeth Warren said that all combat troops should be withdrawn from the region.

"We've turned the corner so many times we're going in circles in these regions. This has got to stop, it's not enough to say some day we're going to get out," Warren said. "It's time to get our combat troops home."

We've turned the corner so many times in these endless wars that we're going in circles. @ewarren will bring our combat troops home. #DemDebate pic.twitter.com/yl3d8G0OCR

Former Vice President Joe Biden disagreed, believing that the "small number" of US troops in Syria and Iraq should remain.

"I think it's a mistake to pull out the small number of troops that are there now to deal with ISIS," he said. "They'll come back if we do not deal with them."

Some observers noted that candidates failed to mention Iraq's parliamentary resolution urging American troops to leave the country and respect its sovereignty.

How can there be questions about whether the candidates would remove troops from Iraq, but no mention that the Iraqi government asked the US to leave??#DemDebate

Senator Bernie Sanders, who is seen by many as the leading challenger to favourite Biden, was keen to distinguish between the two frontrunners' voting records on the 2002 US invasion and subsequent war on Iraq.

"Joe and I listened to what Dick Cheney and George Bush and Rumsfeld had to say. I thought they were lying. I didn't believe them for a moment. I took to the floor. I did everything I could to prevent that war. Joe saw it differently," Sanders said.

Whoa@BernieSanders just went off on Biden for his support of the Iraq War pic.twitter.com/DZhzJbJ1hS

Biden admitted that it was a "mistake" to trust the Bush administration who "said they were not going to go to war", but "were just going to get inspectors in".

Biden is also dishonest when he keeps saying he only voted to authorize force because he thought Bush only wanted to get inspectors in. Biden did want inspectors in, but he was very clear, in 2002, 2003 and 2004, that he was voting for war if necessary -- and believed in the war.

Sanders pointed out that Iraq wasn’t the only war in the Middle East he opposed; he was also against the conflict in Yemen.

"I helped, for the first time in the modern history of this country, pass a War Powers Act resolution ... which said that the war in Yemen, led by Saudi Arabia, was unconstitutional because Congress had not authorised it," Sanders said.

Pete Buttigieg, the former mayor of South Bend and Afghanistan war veteran, agreed that military action should not take place without congressional approval.

"If our troops can summon the courage to go overseas into harm's way, often on deployment after deployment, then we've got to make sure that Congress has the courage to take tough up-or-down votes on whether they ought to be there," he said.

When I'm president, there will be a 3-year sunset on authorizations of military force and we will end endless war. #DemDebate pic.twitter.com/lekzuLYbld

Billionaire political activist Tom Steyer, who was participating in his first primary debate, favoured a cooperative approach in the region.

"There's a gigantic climate issue in Australia, which also requires the same kind of value-driven coalition-building that we actually should be using in the Middle East," Steyer said.

Some were left confused by his comparison.

After recent escalations between the US and Iran, candidates were quizzed over how they would deal with Tehran and its nuclear programme.

Senator Amy Klobuchar reaffirmed her view that "the biggest threat to the world" was Iran. She called the Islamic Republic "a terrorist regime that we cannot allow to have a nuclear weapon".

Omar Baddar, deputy director of the Arab American Institute, wondered why a discussion on nuclear proliferation in the Middle East did not include Israel.

Btw, if we're so concerned about nuclear proliferation in the Middle East, isn't it curious that we're debating #Iran's nukes when Iran doesn't have them, but not a word about #Israel's nukes when Israel does have them? #DemDebate

Others were critical of the leading and alleged right-wing nature of questions on Iran asked by CNN's moderators.

Another awfully-framed, hawkish-from-the-right moderator question to the #DemDebate candidates: 'Would you promise that Iran will never have a nuclear weapon, as Trump did?'

.@wolfblitzer just framed Iran question to @BernieSanders like worst Trump tweet ever - why do you agree with the Ayatollah and agree with a position that led to growth of ISIS? Garbage framing, completely untrue. Bernie should have called out the right-wing framing. #DemDebate

Tuesday night's debate was the last before voting begins on 3 February. The candidate to face US President Donald Trump will be announced at the Democratic National Convention in mid-July. US Politics
Democratic debate: US must be 'pro-Palestinian,' Bernie Sanders says