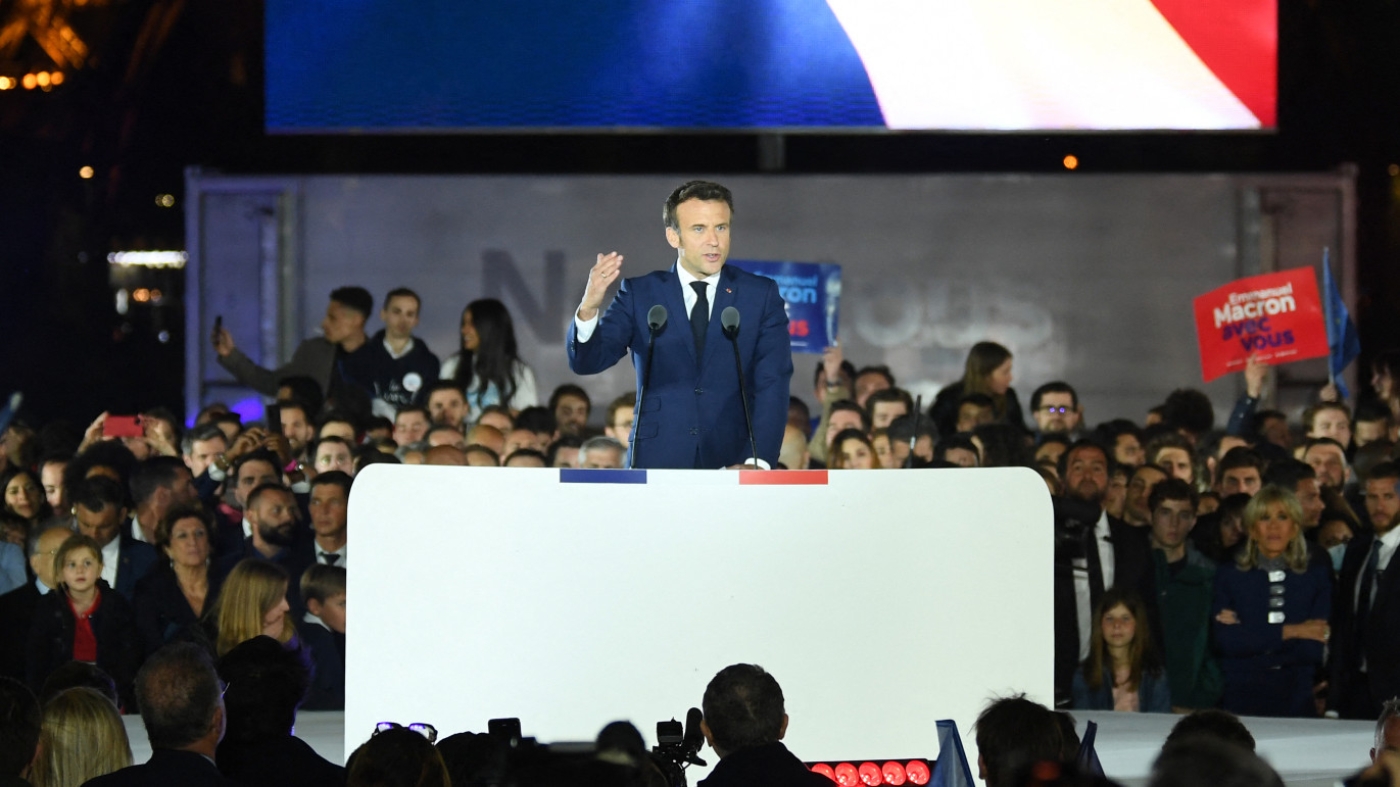 Emmanuel Macron will be re-elected president of France, according to polls, after beating far-right challenger Marine Le Pen as abstentions hit their highest rate in decades.

Projections as voting booths closed across the country on Sunday evening had the centre-right incumbent set to win 58.2 percent of the vote, with Marine Le Pen to lose out on 41.8 percent, the far-right’s highest ever presidential score.

The gap between the two rivals has roughly halved since 2017, when Macron was elected on 66.1 percent of the vote and Le Pen got 33.9 percent. French exit polls are reliable. They have never been wrong about presidential election results.

The campaign was dominated by the war in Ukraine, but most of the major candidates also tapped into France’s nervous relationship with immigration and secularism.

After slowly strolling out on the grass in front of the Eiffel Tower to Beethoven's Ode to Joy, the anthem of the European Union, Macron acknowledged those who had voted for him to keep out Le Pen.

"An answer must be found to the anger and disagreements that led many of our compatriots to vote for the extreme right. It will be my responsibility and that of those around me."

The campaign saw Le Pen, of the National Rally - formerly National Front - party, come within touching distance of the incumbent in opinion polls between the first and second rounds.

She ran on a platform combining plans to tackle the cost of living crisis with social conservatism and anti-immigrant policies.

She also vowed to remove birthright citizenship, only give French citizens access to welfare benefits, and process asylum requests outside of France.

Le Pen has also proposed a controversial ban on Muslim headscarves in all public places.

In a speech conceding defeat, Le Pen said her score was a “sensational victory”.

“We’re more determined than ever,” she added, “and our will to defend French people is even stronger.

“In this defeat, I can’t help but feel a sense of hope. This result constitutes - for French rulers and European rulers - the evidence of a great defiance towards them from the French people.”

The 53-year-old added that she would “carry on” her political career, despite this being her third presidential election.

Though her electoral rise owes much to the disintegration of the traditional left and right parties in France, who scored abysmally in the first round of the election two weeks ago, far-right ideas have been progressively mainstreamed in France as anti-Muslim and anti-migrant sentiment have permeated the national conversation.

'Third round of the election'

All eyes now turn to the legislative elections, to be held in mid-July, which will decide who runs the French parliament.

Macron's La Republic en Marche party won a majority of 308 of the 577 seats in 2017, but having decreased his vote share in Sunday’s election, opposition parties will be campaigning hard.

Melenchon hopes his party will get a big enough score for Macron to name him prime minister, which would be a shock.

‘This should humble him’

European Commission President Ursula Von Der Leyen and other EU officials and world leaders have congratulated Macron on his victory.

But the hard work starts here for the 44-year-old, for whom many people voted just to keep out the far-right, as just over 28 percent of the 47 million people eligible to vote abstained, according to polling, the highest number since 1969. “He gained the votes of people who didn't want the fascist side of France to be in power, and this should humble him.”

In a speech on Sunday night, Melenchon said: “Monsieur Macron is the worst elected president of the fifth republic. His presidential monarchy survives by default.”

Speaking to Middle East Eye between the first and second round, Rim-Sarah Alouane, a researcher in comparative law at the Toulouse 1 Capitole University, said: “Macron has two choices if he wins. Make amends, and have a chance maybe to make things better, or he can keep going on as he is, and if LePen is not elected now, she will be next time.”