Around 130 activists took control of bridges that migrants and refugees use to enter the port town, according to protest organiser French police arrested 14 people on Saturday after a far-right group took to the streets for an anti-immigrant rally in the port town of Calais, where thousands of migrants and refugees are living in improvised camps.

The roughly 80 activists blocked off two bridges close to the city centre and burned tyres, waved banners and set off smoke bombs, police and officials said.

Riot police broke up the demonstration and seized a truck transporting equipment for the group.

While surrounded by officers, some protesters carried banners saying "No Way" and "Go Home," according to photos and video of the protest posted on Twitter.

A press release from the far-right group - Generation Identitaire - said about 130 activists took control of "three bridges that allowed migrants to access the city of Calais".

This incident comes after five men posing as police officers were detained on Friday on suspicion of attacking migrants and refugees in Calais.

A police source said the attackers used iron bars and pickaxe handles, and that the men went repeatedly to Calais to attack migrants and refugees.

Four other people were arrested on 22 February and charged with taking part in attacks several months ago on migrants and refugees near the infamous Calais camp known as "The Jungle".

Thousands of migrants and refugees have been living in there and other smaller camps along the northern coast, desperate to reach Britain, where many have family or community ties and see better hopes of gaining employment or education. 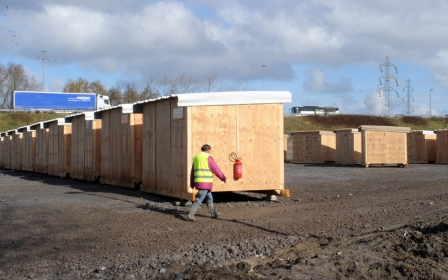 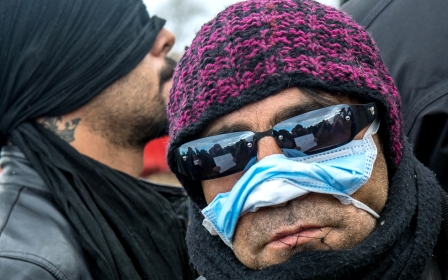