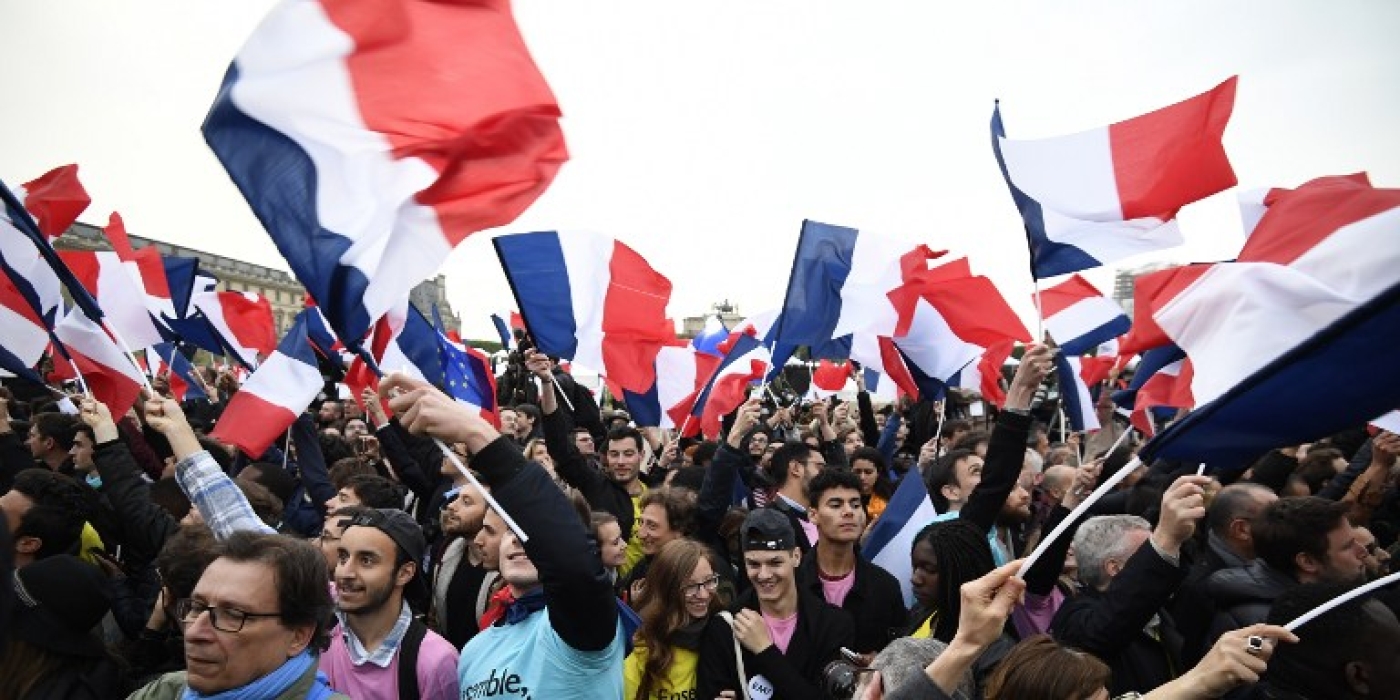 Pro-European centrist Emmanuel Macron promised on Sunday to heal France's divisions after crushing far-right leader Marine Le Pen in a pivotal presidential election that has given him a large but fragile mandate for change.

At 39, the pro-EU former investment banker will become France's youngest-ever leader but will face a huge challenge to enact his programme while trying to unite a fractured and demoralised country.

"I will fight with all my strength against the divisions that are undermining us," Macron said in a solemn address at his campaign headquarters, adding that he had seen the "anger, anxiety and doubts" of many voters.

Projections showed Macron winning about 65 percent of the ballots in the first ever election he has contested, far ahead of Le Pen at 35 percent.

His victory comes after a vicious campaign that has exposed deep economic and social divisions, as well as tensions around identity and immigration.

Paris's main mosque said Macron's victory was a sign of reconciliation between French religions. "It is a clear sign of hope to French Muslims that they can live in harmony and respect of French values," La Grande Mosquée de Paris said in a statement.

Macron had a "brief and cordial" phone call with his defeated far-right rival Marine Le Pen shortly after estimates showed he had won, Macron's team said. In a short statement, Le Pen said she had called Macron to wish him "success" in tackling the "huge challenges" he faces.

Le Pen, 48, had portrayed the ballot as a contest between Macron and the "globalists" - those in favour of open trade, immigration and shared sovereignty - and her "patriotic" vision of strong borders and national identities.

She said her National Front party needed to undergo a "profound transformation" ahead of parliamentary elections in June, which is set to include a name change, according to one of her aides.

Vast crowds of jubilant Macron supporters celebrated outside the Louvre Museum in Paris, waving French flags, where an instant street party erupted after the results were announced. Cars honked as passengers waved French flags, while the crowds chanted "President Macron, President Macron!" from the pavement.

Street vendors wheeled carts with sausages and cold drinks toward the crowds, with some vendors selling French and EU flags.

Shouts of joy had erupted earlier as giant screens on either side of the pyramid flashed up the result.

"We've won!" the crowd chanted as if at a football match following Macron's win.

"He killed her, that's all there is to it," said 31-year-old Abdel Oukil. "I was convinced she would score over 40 percent."

Fabien Colonna, 29, said he was relieved by the decisive margin, saying "if it was less it would have been dicey," after the bruising campaign that exposed France's deep divisions. Unknown three years ago, Macron is now poised to become one of Europe's most powerful leaders, bringing with him a hugely ambitious agenda of political and economic reform for France and the European Union.

The result will resonate worldwide and particularly in Brussels and Berlin where leaders will breathe a sigh of relief that Le Pen's anti-EU, anti-globalisation programme has been defeated.

German Chancellor Angela Merkel's spokesman said it was a "victory for a strong and united Europe," while EU Commission President Jean-Claude Juncker said French voters had chosen a "European future."

The euro rallied to a six-month high against the dollar in Asian trade and Tokyo stocks jumped 1.35 percent after the opening.

After Britain's vote last year to leave the EU and Donald Trump's victory in the US, the French election had been widely watched as a test of how high a tide of right-wing nationalism would rise.

Outgoing President Francois Hollande, who plucked Macron from obscurity to name him minister in 2014, said voting "is always an important, significant act, heavy with consequences," as he cast his vote.

Macron will now face huge challenges as he attempts to enact his domestic agenda of cutting state spending, easing labour laws, boosting education in deprived areas and extending new protections to the self-employed.

The philosophy and literature lover is inexperienced, has no political party and must try to fashion a working parliamentary majority after legislative elections next month.

His En Marche movement - "neither of the left, nor right" - has vowed to field candidates in all 577 constituencies, with half of them women and half of them newcomers to politics.

"We will reconstruct right to the end! We'll keep our promise of renewal!" he said during his last campaign meeting in the southern city of Albi on Thursday.

Many analysts are sceptical about his ability to win a majority with En Marche candidates alone, meaning he would have to form a coalition of lawmakers committed to his agenda - something new under France's current constitution.

He also inherits a country that is still in a state of emergency following a string of militant attacks since 2015 that have killed more than 230 people.

The vote on Sunday followed one of the most unpredictable election campaigns in modern history marked by scandal, repeated surprises and a last-minute hacking attack on Macron.

Hundreds of thousands of emails and documents stolen from his campaign were dumped online on Friday and then spread by anti-secrecy group WikiLeaks, leading the candidate to call it an attempt at "democratic destabilisation".

France's election authority said publishing the documents could be a criminal offence, a warning flouted by Macron's opponents and far-right activists online.

It was the latest twist in an election that has consistently wrong-footed observers as angry voters chose to eject establishment figures, including one-time favourite Francois Fillon, a rightwing ex-prime minister.

The unpopular Hollande was the first to bow to the rebellious mood in December as he declared he would be the first sitting president not to seek re-election in the French republic, founded in 1958.

In the first round of the presidential election on 23 April, Macron topped the vote with 24.01 percent, followed by Le Pen on 21.30 percent, in a crowded field of 11 candidates.

The results revealed Macron was favoured among wealthier, better educated citizens in cities, while Le Pen drew support in the countryside as well as poverty-hit areas in the south and rustbelt northeast.

On Sunday, a third of French voters declined to choose between Macron and Le Pen, either abstaining or spoiling their ballots - a record rate in nearly half a century.

Casting a blank ballot - traditionally used by disgruntled French voters as a protest vote - usually increases in the second round.

But this year it went as far as to quadruple, thanks in part to an unprecedented situation of neither the two mainstream left-leaning or right-leaning parties making it to the run-off. France
France readies for election in wake of latest attack