French president hails dismantling of IS cell after dramatic raids Bomb disposal experts on 25 March 2016 in Schaerbeek, Brussels (AFP)
By
MEE and agencies

France's president has said police are in the process of destroying an Islamic State network responsible for attacks in Brussels and Paris, after another dramatic day of anti-terrorism raids, bomb alerts and shootings in both cities.

Francois Hollande's declaration came after Belgian police on Friday shot and arrested a man in the Schaerbeek area of the city, saying he had links to those arrested in Paris hours earlier suspected of plotting a new attack.

French police meanwhile said that the DNA of Brussels' airport bomber Najim Laachraoui was found in the Bataclan concert hall in Paris - the scene of carnage in the IS attacks last November.

Hollande said that the latest raids and evidence showed that police forces in both countries were dismantling the cross-border IS cell responsible for both devastating attacks.

He warned, however, that there were more to be discovered.

"We have had some results in finding the terrorists and, in Brussels as well as Paris, there have been a number of arrests and we know that there are other networks," he said.

"Even if the one that committed the attacks in Paris and Brussels is in the process of being destroyed... there is still a heavy threat."

In Brussels, police shot and injured one suspect in the leg before arresting him. Footage posted on social networks showed the man lying near ytrain tracks, clutching a backpack, as a bomb disposal robot inched forward.

Hooded police were seen grabbing the man's legs and dragging him away.

Belgian state broadcaster RTBF reported that witnesses said they saw around 50 policemen and heard two loud blasts and shots from heavy weapons during the raid.

Belgian media reported police as saying the operation was linked to the foiling of an attack in Paris on Thursday, where police arrested 34-year-old Reda Kriket, whose flat was filled with heavy weapons and explosives.

The links between the attacks on Brussels and Paris continued to strengthen after it emerged that Kriket was sentenced in absentia by a Belgian court in February for connections to a Brussels terrorism network.

And Schaerbeek, the scene of Friday's raid and arrest, is the same suburb where the bombs used in the Brussels attacks were built.

There is also growing evidence that the IS network had crossed into Germany, with two suspects arrested there overnight on Thursday with suspected links to the Paris and Brussels attacks.

But for the successful raids and declarations by the French president, reports continued to emerge of lapses in efforts to capture Salah Abdeslam, the alleged ringleader of the Paris attacks of last November.

Belgian police on Friday revealed that officers in the town of Mechelen received intelligence in December on the house in Brussels where Abdeslam was arrested last week.

A police officer, however, failed to upload the information into a national police database. “Unfortunately a mistake has been made,” said Yves Bogaerts, the local police chief. The Belgian police audit body will investigate the case, he said. 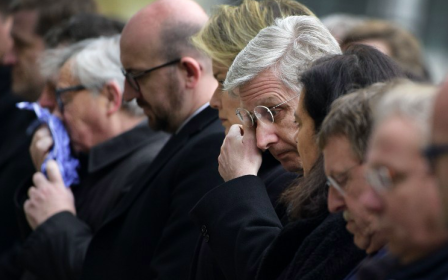