A renewed Syrian government offensive has pushed further into rebel-held areas of Aleppo, leaving residents fearful for their lives ALEPPO, Syria - The stench of battle hangs heavy in the air, armoured cars carrying heavy machine guns prowl the rubble-strewn streets where children used to play. At night, soldiers are close enough to be heard over the crack of gunfire and crump of mortar shells. One only has to look out of the window to register dozens of muzzle flashes and the blinding sweep of searchlights.

As the Syrian army and its allies advance on the rebel-held east of the city, districts that were once far from the street fighting are fast becoming the new flash points. Many residents who braved bombs from the air now find their front door opening on the front line.

Here, in Saif al-Dawla and Salah al-Deen, two central areas close to a sprawling public park and the city's ancient citadel, the last few months have been devastating.

"There are no buildings here now which have escaped damage," Ghalia Samao, a teacher in Saif al-Dawla, told Middle East Eye. "So much has changed in the last three months - all buildings left standing are devastated, cars are burned, there's broken glass everywhere."

Proud apartment blocks that had stood years of war now lie in ruin, as government soldiers topple them to clear streets for combat in a renewed offensive following the end of a September ceasefire.

So close are the battles that residents hunkered down in their homes can hear rebels trade insults with their foes - "Assad's dogs will die", "Pigs of Qatar and Turkey", and worse - as they launch furious attacks on each others' positions.

On Wednesday, reports said government forces had stepped up their offensive on Salah al-Deen, and rebels mocked flares launched to illuminate government advances - they are much preferred to the bunker busters and barrel bombs dropped all over the city.

While in territory terms the government advance has not been huge - street-to-street fighting is not its strength - the effects on freshly engulfed areas have been devastating.

And residents of Saif al-Dawla and Salah al-Deen, are trapped with nowhere to run.

Samao moved to to Saif al-Dawla a year ago from Marja, on the city's southern outskirts near the Castello Road, after her house was devastated by air attacks which injured both her and her husband. She cannot move again.

"This is our daily life over the past few weeks - the regime advances, takes control of new ground, and then the rebels counter attack and take it all back," the 38-year-old said.

"Bombing, fighting, that's it, that's life. I don't see or know when this will end, every day seems like it’s the first day of fighting, the fighters battle on and most of them don't care about the suffering of the residents.

"My home is very close to the frontline, in the last days the clashes haven't stopped at night as the regime tries to advance. And I have no choice but to stay as there are no other options."

Nader Saaqa, a librarian who lives in nearby Salah al-Deen with his four children and wife, fears government forces will be in his street within days if they continue their gains.

"The fighting is furious in the city and lately around my street," he said. "The frontline is not far, I can here sounds from regime side swearing and other from rebels side saying 'Allah Akbar', then clashes and bombing.

"I am scared. The regime's advances are slow but steady. I don't want to wake up one day to see regime's forces in my streets.

Saaqa said the siege of rebel areas was placing huge pressure on civilians, already battered by years of battle and months of siege warfare.

"We have nothing of life but the word itself, we are on the edge of death," he said. "I didn’t think it could ever get to this - no bread, or food. We haven't had running water for a month after the pipes were damaged by bombing and most of it poured onto the street, wasted.

"The regime has been targeting it to deprive people of water. They block the roads so no food can enter. We used to be able to get by, there were ways, but now we have nothing.

"It's a part of the regime's grand strategy - first cut the roads into the city, intensify the bombing and force people out, like what happened in Daryya and Damascus, and forcing them to Idlib and other areas.

"The regime has brought its tanks and fighters in Damascus to fight and do the same here but, God willing, it will not happen and things will go in our favour very soon."

As night falls in Salah al-Deen, the streets empty of those who had dared to venture, and fighting erupts once again.

The familiar insults are traded over the gunfire and the mortar shells, and civilians hunker down in whatever is left of their homes, waiting for the day to break.

Russia on Thursday denied that aircraft carrier group steaming towards the coast of Syria will not be used to attack Aleppo, and has said in recent days it has carried out no attacks in the city for more than a week.

But with battles raging on the ground, one horror is replaced with another.

And the fighting will not end soon. 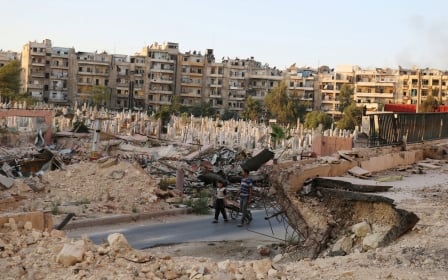